Author It's On Editorial 652 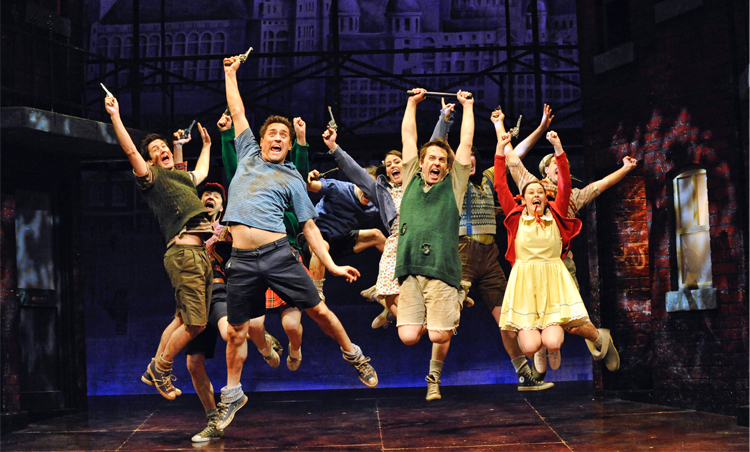 It may be over 30 years old, but Willy Russell’s brilliant musical remains relevant and continues to get audiences on their feet.

Officially christened the ‘Standing Ovation Musical’ because of its reputation for bringing the audience up on their feet before the final curtain, Blood Brothers certainly had a reputation to uphold going into its run at the New Theatre. All the stars were aligned with a seasoned cast, and some familiar faces returning for a swan song tour! The stage was set for a stellar evening of theatre, but you’ll have to read to the end to see if I maintained the shows reputation and stood up for the final round of applause… only joking I’m not that cruel. Of course I stood up! But do read on for a better insight into what makes this veteran of the West End so special.

Firstly, the production value of tonight’s performance was through the roof. The design team behind the sets and the lighting did an incredible job to bring an authentic feel to the stage. Honestly it looked just like a cobbled terraced street one minute and quaint little living room the next! The musical score itself was much more rock n’ roll than I’ve grown to expect from musicals and I bloody loved it. The orchestra, conducted by Matt Malone, brought the house down on the bigger numbers and created emotion when it was needed. This is a tight run musical that has heart in every corner, and it’s told beautifully with the music.

The real gem of the show is of course Willy Russel’s tightly wound narrative of friendship, tragedy and family drama. At the heart of it all Blood Brothers is all about the story, and that couldn’t have been told by a more professional and frankly mesmerising cast. The entire ensemble excelled tonight, with every member having their own share of the spotlight and nailing not only their respective parts, but also the comedic timing across the board was spot on. That’s something which is quite rare and special for a cast of this size.

Yes, the entire cast performed superbly tonight, easily delivering the hits like Bright New Dayand Marilyn Monroewhich have now been sung over 10,000 times on the West End! That’s a hell of a lot of singers over the years to compete with! But the touring cast held their own and blew the roof off. However, as always I had to have my favourites didn’t I?

The brothers Mickey (Alexander Patmore) and Eddie (Joel Benedict) shone tonight, and it was incredibly entertaining to see these young actors bounce off each other and the rest of the cast. A musical of this reputation has big boots to fill for the titular brothers, but they pulled it off with ease. With a little help from Danielle Corlass of course; completing the love triangle and delivering better drama than anything you’ve seen on Love Island I can promise you that!

But how can I possibly go this long without mentioning the sensational Lyn Paul. She’s toured the world over as a member of The New Seekers, she’s worked with Frank Sinatra, Jack Jones and Olivia Newton-John, she debuted in Blood Brothers in 1997 and now she’s returned for one final time as the definitive Mrs Johnstone in her farewell tour. It was truly a pleasure to see her bring the full force of her 20 years of experience playing this character out to play tonight. The transformative performance Mrs Paul gave will remain with me for a long time, and I feel privileged to have witnessed her in action before she takes her final bow at the end of this UK run. I really do feel sorry for whoever has to follow her in shows to come!

Overall Blood Brothers was an absolute belter of a show and you’d be fool to miss it! I cannot throw enough praise at this heart wrenching, hysterical and crowd lifting show stopper. I’m giving it 5 bloody brothers out of 5! It simply has everything you could ask for from a musical and it’s plain to see why it’s shown the test of time to become one of the most successful musicals ever to grace the West End. If I could I would give a firm Blood Brothers style handshake to everyone involved!