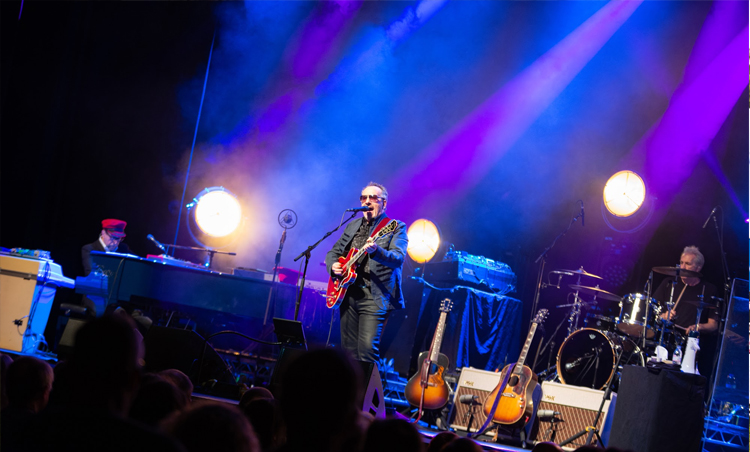 Festival of Voice 2018 came to a terrific end on Sunday with a show from Elvis Costello and his backing band, the Imposters.

Over 26,000 people attended Festival of Voice gigs, theatre productions, community projects and more over 11 days between 7-17 June, with sold-out shows from Gruff Rhys, Patti Smith, Laura Veirs, Tank and the Bangas and more.

Costello played a two-hour set to a packed and vocal Wales Millenium Centre, covering everything from his days as a New Wave upstart to his current role as one of rock’s elder statesmen.

Costello explored and revisited his extensive back catalogue while peppering the show with enough crowd-pleasers to keep even the most casual of fans happy. There were the evergreen classics. Pump It Up, Watching the Detectives, (I Don’t Want to Go to) Chelsea all featured and sounded great.

That said, anyone hoping for greatest hits performance was looking in the wrong place – Costella has never been that sort of artist. It was in the quieter moments that he hit his stride, despite the brilliant energy of the Imposters. At one point donning a red bowler hat, he clearly revelled in his role as lounge lizard. There was a beautifully pared back rendition of She, greeted with whoops from the audience as soon as Steve Nieve began to twinkle those familiar keys. For this writer’s money that should have marked the end of the show.

But it didn’t end there. With no support band before them, the show went on for perhaps too long. At two hours it felt baggy, like a Judd Apatow movie. With a bit of editing and better pacing the night could have been superb. There were bumps along the road, including a meandering Adieu Paris that felt too indulgent for its own good, and an amped-up rendition of I Want You’s slinky funk which sounded great, but as a show closer it felt like an anti-climax.

However, these are minor quibbles about what was still a fantastic show. “Cardiff loves you, Elvis,” shouted one audience member. Indeed they do.

Sashay your way to the New Theatre this Week for Death Drop!

Because the night belonged to Patti Smith