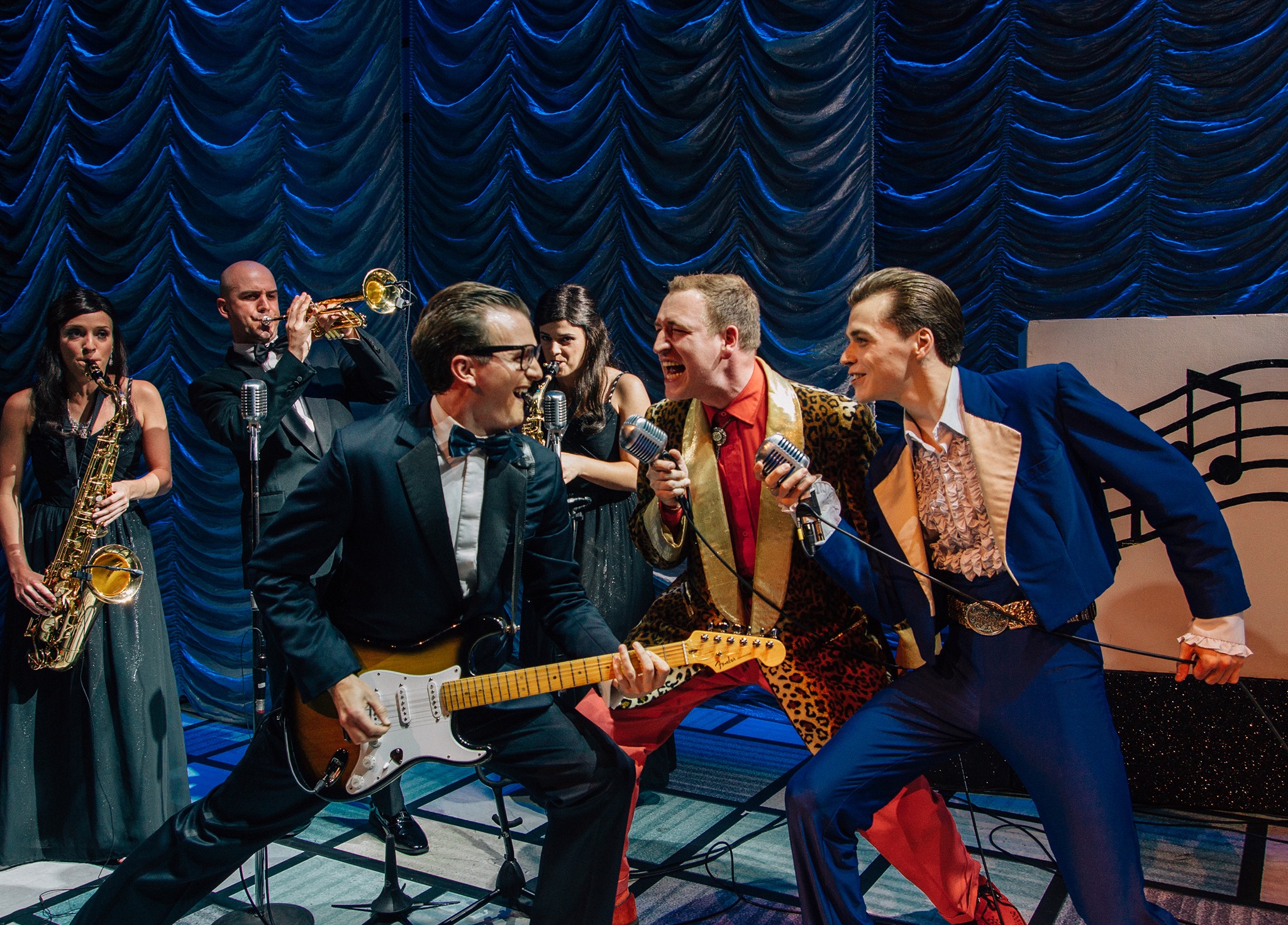 Oh boy, it’s not everyday you get to see Buddy Holly rave on the New Theatre stage. Listen to me; it will make your heartbeat right out of your chest with the number of timeless classics it delivers. It will melt your heart with words of love, and maybe baby it will blow you away. It doesn’t matter anymore if you have plans this week, think it over and come to see Buddy instead before it fades away. It’s a good un’. Well… alright, it’s a great one, and you’ll be wishing you can see early in the morning and after the midnight shift if my name isn’t Peggy Sue. It’s so easy to get tickets, how can you miss you out?

For an extra brownie point, see if you can spot the 16 Buddy Holly song titles I’ve subtly hidden in the intro. Anyone who wants to know why this show has been around for three decades and is worth seeing, then please read on.

This show is first and foremost all about the music. There was an impressive array of musical talent in the performance, with a strong focus on delivering the classic Holly hits. There was quite a little drive towards a story or narrative but the show can hardly be blamed for that! Buddy Holly was of course tragically killed in a plane crash at the age of 22, along with Richie Valens and J.P. Richardson. This lead to the show taking more of a tribute act direction which I had not expected but was pleasantly surprised at. If you’ve ever seen The Bootleg Beatles on one of their many visits to Cardiff then you know what to expect (other than different songs of course); a general outline of Buddy’s music career with a setlist as long as your arm.

The whole cast were exceptional tonight, and they all brought their unique musical stylings to the show. One member of the cast, Rhiannon Hopkins, brought quite a few, with multiple lyrical performances as well as stints on the piano and saxophone. She certainly took the M.V.P. of the supporting cast medal for me tonight. But then, of course, the man himself cannot go without a mention; Christopher Weeks was on top form, especially in the second act, where he displayed mastery in vocals and showmanship. But more than anything, I loved his performance because he clearly loved delivering it. You could feel the energy radiating off him and I hope he has as much fun throughout the tour.

There are two distinct sections to this show I feel, and that’s Buddy unknown in act one and Buddy at the peak of his career in act two. The first I think is there for the fans of the late musician, as I must admit it did not grip me as much as I’d hoped. Although it was great fun to see the actors acrobatically playing together to deliver the Holly classics, I didn’t get as much of a buzz from it as the second half. That being said I am not exactly a reliable reviewer as Buddy Holly died nearly four decades before I was born, and although I have heard some of his songs I can’t pretend I’m an expert. This is why I enjoyed act two a lot more. The diversity in music styles was much broader and the whole orchestra came out to play, who were absolutely on point. They delivered banger after banger, and the crowd literally went wild. I honestly feared for the safety of some of the older members of the audience who I doubt had moved so energetically for years! It even had the stewards dancing in the aisles!

Overall, I give this one 4 rocks out of 5 rolls. The cast brought a lot of energy which radiated throughout the New Theatre and I’d encourage any fan of classic rock and roll to check it out.