Author It's On Editorial 621 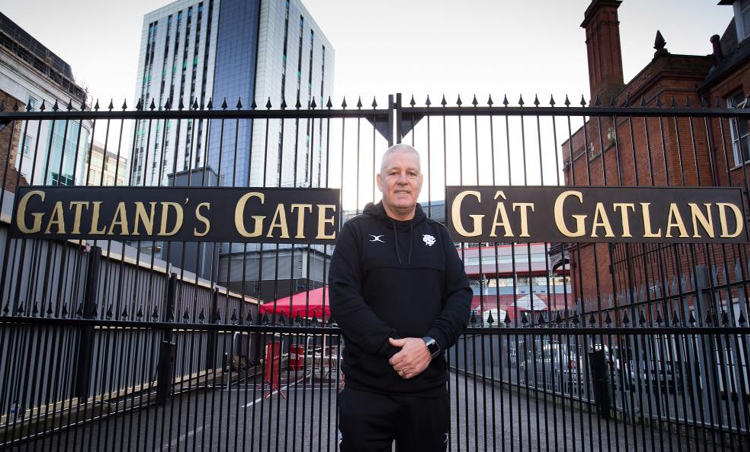 The Welsh Rugby Union (WRU) has honoured Warren Gatland, arguably the most successful coach in its history, by permanently re-naming the main vehicle entrance to Principality Stadium – Gate 4 will now be known as ‘Gatland’s Gate’.

The wrought iron double-fronted gateway, feeding a road which descends into the heart of Wales’ national stadium and carries team-coaches, celebrity limousines and superstar tour-buses to within a stone’s throw of the dressing rooms, players’ tunnel, hallowed turf and stage area, will now forever carry the name of the triple-Grand Slam winning former head coach.

Gatland served Wales over a 12-year period and completed his first Six Nations clean sweep in his debut season in 2008, before repeating the trick in 2012 and finishing on the same high, earlier this year, to win the 2019 tournament.

The native New Zealander, who took charge of two successful British & Irish Lions tours during his tenure with Wales, was also at the helm for three Rugby World Cups, reaching the semi-final stages on two occasions (2011 and 2019) and recently took Wales to the top of World Rugby’s rankings – for the first time – by virtue of a record 14-match unbeaten run.

He is Wales’ longest serving head coach having reigned twice as long as his nearest rival Clive Rowlands, who completed six years in the hot seat from 1968 to 1974, and his achievement of three Grand Slams is only matched by the famous side of the 70s (which won three Slams but under different coaches) and the team from the first ‘golden era’ which won in 1908, 1909 and 1911 (when the head coach role had not yet been conceived).

Rowlands oversaw three Championship wins, though his Wales side only went unbeaten during one of those runs (’71), but his successor John Dawes is Gatland’s greatest challenger with four titles (’74, ’76, ’78 and ’79) and two Slams achieved during his period of rule.

Though Gatland may not be able to match Dawes’ four titles (Wales’s title winning performance in 2013, which would make four, is attributed to Rob Howley who took over temporarily after Gatland injured himself in a fall) he remains the only figurehead to have completed a Grand Slam hat-trick at the helm.

“This is a small tribute of our appreciation for Warren, a token of the high esteem in which he is held throughout Welsh rugby,” said WRU CEO Martyn Phillips, at the unveiling of the new wrought iron signage on display at ‘Gatland’s Gate’.

“He will always be remembered as the coach who brought home a hat-trick of Grand Slams but, beyond the silverware, he also firmly re-established our Wales side as a major force in the world game.

“He has re-invigorated a level of pride and respect for our national sport not so keenly felt since the likes of the great Clive Rowlands and John Dawes oversaw their own halcyon period 40 years and more ago.

“We will move on and our national team will continue to strive for success and, I have no doubt, achieve great things under our new head coach Wayne Pivac, but Warren’s entry in the history books can never be re-written.

“He will go down in legend as one of the all-time greats and we hope that ‘Gatland’s Gate’ does something to show him the strength of gratitude felt by an entire nation of rugby fans.”

‘Gatland’s Gate’ guards the main access route to Principality Stadium, situated on the East side of the ground, it services Westgate Street and sits between the newly WRU-owned Westgate Hotel and the WRU shop and tours office, adjacent to Gate 3.

The slip way it presides over leads to an underground car park which sits beneath the lowest stands of the stadium and doubles as both a VIP entrance and for heavy goods access to the stage, track and playing surface utilised by the multi-event formats Cardiff’s chameleon-like venue offers.

The sign in place today, which gives equal prominence to both the Welsh and English language, will be replaced in the long term by an integrated and elaborate design which will form an integral part of the gates themselves, but the entrance will be known as ‘Gatland’s Gate’ with immediate effect.

“This building will always be a very special place for me,” said Gatland, of Principality Stadium.

“It evokes a host of wonderful memories and has been the location for some of my very best days in rugby.

“It embodies all the emotion that goes with winning big games, but also the hard work, dedication and passion of everyone involved at every stage from players to staff and to my own family and to the fans themselves.

“This a hugely unexpected honour and one that I am humbled by.  I’d like to thank all the staff at the Union, the players, my fellow coaches and back room staff and everyone throughout Welsh rugby for their passion, respect and belief over the last 12 years.”

Pivac, who succeeds Gatland and takes charge of his first Wales fixture against a Barbarians side led by his predecessor at Principality Stadium tomorrow, is the 23rd man to lead Wales since David Nash was appointed head coach in 1967 – a WRU panel of selectors ran the international teams before that time.

Buddy: The Buddy Holly Story at the New Theatre - Review