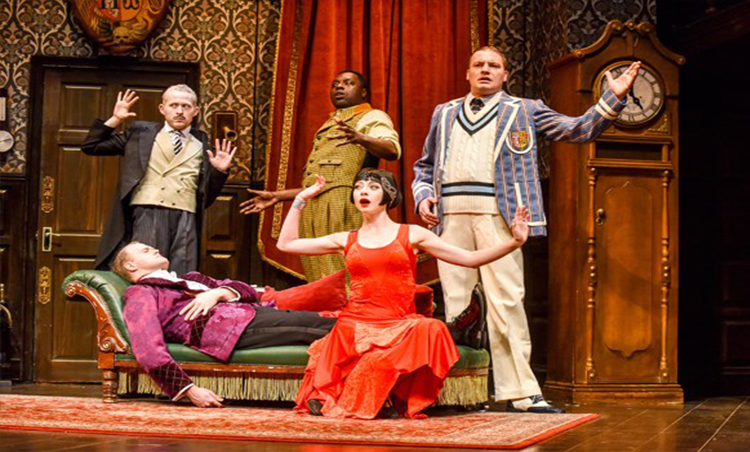 A six-day run of The Play That Goes Wrong opened at the New Theatre last night. Usually everyone wants the first night to go as smoothly as possibly, but thankfully this one went wonderfully wrong. Every mishap went to plan in a show that has had audiences helpless with laughter since its first run in 2012.

The play is ostensibly an amateur production of a murder-mystery called The Murder at Haversham Court, put on by the fictitious Cornley Polytechnic Drama Society. A young man is murdered on the night of his engagement party and it’s up to a small group of hapless character to find the culprit.

Intrigue turns into hilarious farce. The actors forget their lines, or keep going through the same part of a scene several times because they can’t remember what happens next. Cast members fall out over who’s playing who. The set all but collapses, and everyone’s drinking glasses of something that’s supposed to be whiskey but is actually a far more dangerous fluid.

The New Theatre audience were in hysterics throughout. One the show’s strengths is that there are very few dips in momentum, the laughs keep coming as the incompetency of the drama society becomes more and more absurd. The seamless set-pieces can still catch you off-guard even if you’ve seen the show before, and the cast are excellent throughout. It’s a wonder they manage to keep straight faces.

The Play That Goes Wrong will be performed nightly at the New Theatre until Saturday, as well as afternoon performances on Thursday and Saturday. It’s well worth a watch.