//
Comments are Off
Reviews

A musical version of An Officer and a Gentleman opened at Wales Millenium Centre last night, the first of a six-night run that ends on Saturday.

The show was a treat, especially for fans of the original film, with a story that incorporated songs from the original score with a handful of 80s classics, including An Officer and a Gentleman. Songs like Heart of Glass, Kids in America, Girls Just Wanna Have Fun and Material Girl were done justice by a capable cast. 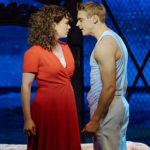 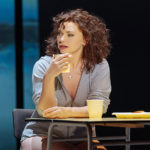 The best performances of the night came from the female members of the cast, particularly Emma Williams, whose Paula was spiky, smart and funny. One of the show’s highlights was an all-female performance of It’s a Man’s Man’s World, touching on feminist themes that perhaps should have been explored more during the rest of the show.

One criticism may be that some of the 80s songs, ones that weren’t part of the original score, at times felt shoehorned into the plot, the meaning of the song not matching up with the story being told.

But that’s a minor quibble. Anyone looking for a great night out this week, especially film fans and lovers of 80s music, should give An Officer and a Gentleman the Musical a try.