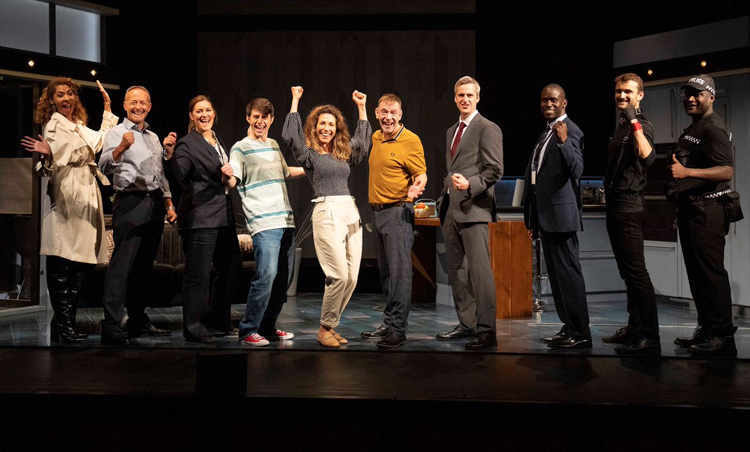 Witness Peter James’ thrilling novel come to life in the New Theatre this week as EastEnders icon, Adam Woodyatt, takes to the stage to unravel a disturbing and heat pounding mystery. This show promises to have you on the edge of your seat right up until the final curtain, and it certainly delivered a night of thrilling theatre.

After the glitz and glamour of last week, it was great to see something totally different on the New Theatre stage as we ease into a new season of shows. Looking Good Dead was chilling, and the entire audience seemed to hold its breath as the plot unravelled on stage. The set design was so modern and slick it felt alien in such as historic building, but this only adds to the unease generated by the scenes on stage. From start to finish you will feel the tension build with every twist and turn.

Peter James is the UK’s number one bestselling crime and thriller author, so its no surprise that his work has been adapted to the screen and now the stage. The world premier tour of Looking Good Dead boasts an impressive cast, from Ian Beale himself to star of stage and screen Gaynor Faye; her most notable role being that of Megan Macey on Emmerdale. Both had some great on-stage chemistry with each other, selling their characters as a couple pushed to their brink.

There have been several stage adaptations of novels at the New Theatre over the years which have all been well received, and this is no exception. The set design cleverly hid the relatively small space the actors had to work with, compared to a screen adaptation, making the show feel expansive and fast paced.

The darker tone did not dissuade theatre goers from turning up in their masses to a packed opening night. Be warned this show veers away from the shine of your regular play or musical at the theatre, but its great to see other styles of performance. If you’ve liked binge watching some grittier shows in the past year, then you will absolutely find something to enjoy here.

Overall, Looking Good Dead kept us guessing and on the edge of our seat until the final curtain. I would recommend investigating the New Theatre this week to catch the show in the act before it gets off the hook, on Saturday.

30th Anniversary Tour of FAME – THE MUSICAL arrives in Cardiff