Author It's On Editorial 225 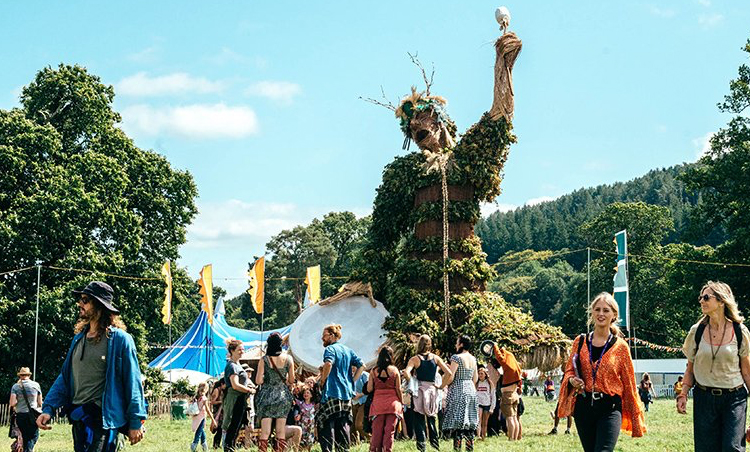 Wales’ largest music festival, Green Man, is delighted to announce that it will be going ahead on 19-22 August 2021, returning after an enforced year off to the epic surroundings of the Black Mountains, deep in the heart of the Brecon Beacons for its 19th edition. The festival today announces the first performers and details of this year’s event, including music headliners Little Dragon, Caribou, Mogwai, and Fontaines D.C.

Tickets for Green Man 2021 have already sold out, including the Settler’s Pass, which turns the festival into a week-long holiday, allowing early access to the site from August 16, and including workshops, music, discounts on local heritage sites, galleries, castles and more.

The magic of Green Man lies not just in its scenery and music. Made up of 10 individual areas, the festival also offers a diverse range of events to accompany its incredible line-up, boasting art installations spread throughout the tranquil valley, a beer and cider tent to enjoy a crisp Welsh pint, a pre-historic/Land Before Little Folk themed area of discovery and exploration for the ‘little folk’ and a relaxation and workshop space for the teenagers. As well as a line-up of science, film, comedy & literature that will be revealed soon.

Welsh acts confirmed for the 2021 event include Charlotte Church, Gwenno and Catrin Finch. Flintshire native Kelly Lee Owens will also be bringing her own brand of techno pop to the Black Mountains event following the release of her second album ‘Inner Song’, as will Cardiff collective Melin Melyn. Also from Wales’ capital city, Buzzard, Buzzard, Buzzard will be offering a fresh outlook on the classic rock model alongside Duski and H Hawkline, who are also joined by Swansea’s Gonhill and Wales/Sheffield band Sister Wives at the 2021 event.

Known for his solo material and work with Super Furry Animals and Neon Neon, Gruff Rhys will be taking to The Mountain Stage, as well as sets from Matt Maltese, This Is The Kit, Green Man Rising 2020 winners Nuha Ruby Ra, The Surfing Magazines, Boy Azooga, and more.

Delighted to be announcing the return of Green Man in 2021, Fiona Stewart, Managing Director and Owner of the festival says: “At times it seemed like a dream that we would ever be back in the fields together, I can’t tell you how much it means to me, and the thousands of people that rely upon and make Green Man happen, that it’s actually going ahead.  We cannot wait to see people enjoy the festival again!”

‘I am very grateful for the support of Welsh Government who gave me the confidence to run this year’s festival and funding through the CRF. Green Man is an independent festival run by a small Powys company and we would have been in difficulties without this help.”

On this year’s bill, Green Man are thrilled to welcome back one of the biggest names in electronic music Caribou to headline Friday night. The set will see Caribou debut songs from last year’s acclaimed album Suddenly, whose dreamy electronica echoing among the Black Mountains is sure to be a highlight and a special moment of his shapeshifting 20 year career.

Talking about the festival, Dan Snaith AKA Caribou says: “There’s a kind of magic about Green Man – both that I’ve experienced myself in the past and that I hear about from friends who go every year. I feel very lucky that we’re going to headline this year.”

Famed for their undeniable presence and raucous live sets, closing this year’s festival are Fontaines D.C. The inimitable Irish five-piece continue the Green Man tradition of debut festival headline sets to perform songs from their acclaimed debut album Dogrel which earned them a Mercury Prize nomination and Album Of The Year at BBC 6 Music and Rough Trade, and the intensely confident, patient and complex Grammy Award nominated follow up album A Hero’s Death which arrived battered and bruised, albeit beautiful – a heady and philosophical take on the modern world.

Also gracing The Mountain Stage are art-rockers Django Django who recently released their highly-regarded fourth studio album Glowing In The Dark; two-time Grammy Award winning musician Thundercat, lauded for his work with Flying Lotus and Kendrick Lamar and his genre-bending bass-wizardry; Nadine Shah, oft described as a blend of PJ Harvey and Nick Cave, with her stunning sound and evocative trademark social commentary; and The Staves’, whose stunning harmonies reverberating off the mountains will no doubt be a highlight of this year’s festival.

Some of Green Man’s most unforgettable performances over the past few years have come from the jazz artists who are currently making huge waves in the mainstream, and this year should be no different. Soul shaking afrobeat eight-piece KOKOROKO and London collective Steam Down, born out of weekly jam sessions and now renowned for their furiously energetic sets, are today announced to play at Green Man ‘21.

The Walled Garden will see performances from Jockstrap, Viagra Boys, Greentea Peng, The Orielles, Liz Lawrence, Sinead O’Brien, Hen Ogledd, Deep Throat Choir, Vanishing Twin, Pictish Trail. One of the most exciting stages of the festival, Rising Stage will be home to some of the most exciting upcoming artists on the scene, including Egyptian Blue, Do Nothing, Lazarus Kane, Faux Real, The Goa Express, Drug Store Romeos, Prima Queen, and more.

The safety of ticket-holders, artists, crew and everyone who comes to Green Man is their first priority, therefore anyone over the age of 16 attending the festival site will also have to demonstrate they have received a negative NHS Lateral Flow Test within 48hrs prior to their arrival, or demonstrate that they have received 2 vaccinations at least 14 days prior to their arrival.

Ticket-holders who are no longer able to make this year’s festival will have the chance to rollover or refund their ticket until 17:00 BST on Friday July 23, and a subsequent re-sale of any refunded tickets will be held on Tuesday July 27 at 10:00AM BST.

The full lineup is as follows