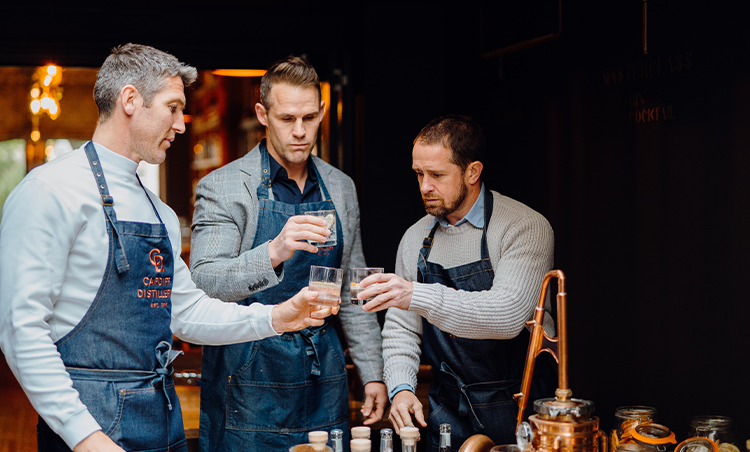 Teamed up with local Cardiff Distillery, the ex-Lions players decided to launch their own gin brand after a conversation over a few drinks. Shane Williams said, “When we do stuff, we like to keep it Welsh for obvious reasons.”

After plenty of gin tastings and logo and bottle designing, the boys jumped onto the idea of launching two separate bottles. “We [The boys and Cardiff Distillery] worked together to bring the brand together,” said Shane.

The first two gin bottles launched are No.11, a violet glass bottle representing former winger and number of Shane Williams. The second bottle is a turquoise blue bottle named ‘No.15’ after ex player’s number Lee Byrne.

“We thought the bitter had been done to death,” laughed Shane, “We knew that gin was drunk by all, it’s not just drunk by ladies; it’s quite a cool and fashionable drink,” he said.

No.11 is made up of eleven botanicals including coriander, angelica, orris, bilberries and almond. No.15 offers a stronger kick featuring rockrose, gorse flower and sea buckthorn; all ingredients have been sourced from the South Wales coast.

Lee Byrne said, “When we helped choose the flavours, we all chipped in and then we had the chance to add the exact botanicals. We want this to be the best gin and give it the best crack.”

You can find the gin bottles for sale in hotels, restaurants, bars and supermarkets from the end of next week. James said, “We will have it on sale wherever we can!”

The boys are eager to see how well their first two alcoholic gin flavours go down before releasing their third and fourth bottles to the collection. The next two bottles are designed with a little less colour, the third, will be a clear glass bottle and the fourth will be a misted, frosted glass, both aimed to sit elegantly beside the first two released bottles.

Fatboy Slim Is Coming Back To Cardiff On His UK Tour