Author It's On Editorial 322 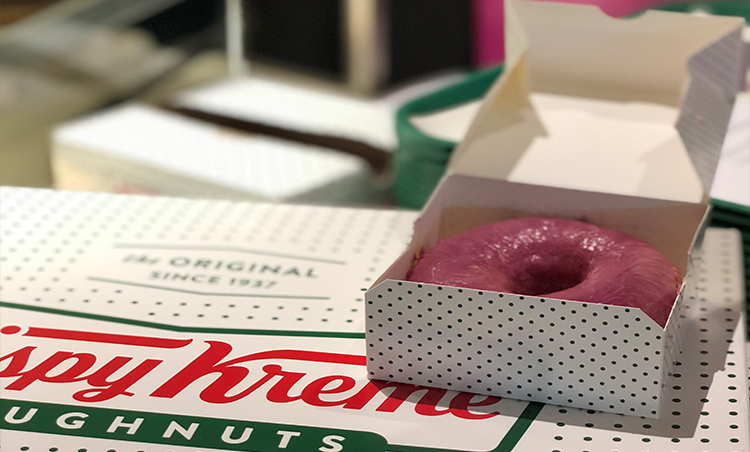 The ‘Vimto secret menu’ that launched on Monday 8th October will be available until 14th October, in all Krispy Kreme retail stores.

They won’t be on the official menu at first, so customers will have to know the secret code which is – “I see Vimto in Krispy Kreme”

Following a week of secrecy, the vimto doughnut will officially launch on October 15.

St David’s Shopping Centre in Cardiff celebrated the sweet refurbishment of its Krispy Kreme store this morning, which re-opened at 8am and saw eager doughnut fans join to watch their favourite doughnut store re-open its doors, plus get their hands on the freshly made treats.

Jammy enough to be first in line, and win himself an extra special prize, was Nick Townsend. Nick, arrived at the shopping centre at 6:30am this morning. Showing his excitement for the new-look store, Nick said: “I’m so happy that I’m first in line, I love Krispy Kreme and I’ve been excited for the St David’s store to re-open, it looks great and I love my prize! I’m really glad I came along, it’s been so much fun.”

Not only did the first in line bag himself a sweet prize, customers throughout the day were given the opportunity to win tasty treats when they took on the Krispy Kreme High Striker game.

“We’re so glad our Cardiff fans had fun at the re-opening this morning! It’s been great spreading the joy of Krispy Kreme throughout the city – the reaction to our high striker game has also been brilliant and we were delighted to dish out lots of delicious prizes to our deserving winners. We look forward to meeting even more doughnut lovers at tonight’s student lock-in!”

Alfie Boe will start his UK tour in Cardiff