Author It's On Editorial 487 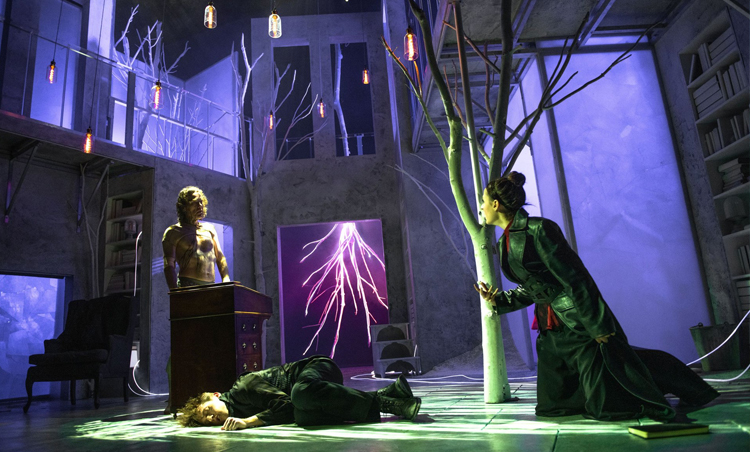 What do you get when you mix an age old classic, a touch of theatre and the spookiest event of the year together? It’s not Minsky’s Halloween Spooktacular… It’s Frankenstein at the New Theatre! If you’re looking for the perfect combination of creepiness and unsettling comedy this Halloween then look no further. This retelling of Mary Shelley’s timeless classic brings everything to the table, with enough wit and suspense to keep you on the edge of your seat till the fatal dropping of the final curtain. Think you’re brave enough to find out what this bone-chilling play has to offer? Then read on… if you dare!

(No seriously please read on my reviews aren’t that scary I promise!)

Mary Wollstonecraft Shelley (great name) wrote Frankenstein over 200 years ago, after being challenged to write a ghost story by Lord Byron (also a great name) while they were on holiday by Lake Geneva. The story that Shelley conceived has not only endured the test of time, but remains a phenomenon to this day. After countless telling’s, retellings, parodies and spoofs, it is brilliant to see the cult horror brought new life in Rona Munro’s production. This time around the character of Mary Shelley is included in the action; here played by the expressive Eilidh Loan, to tell the story as she writes it following on from her days in that Villa on the shores of Lake Geneva. The performance Loan gives is witty and cruel with some cracking facial expressions going on. She has a lot to do pulling the narrative together for the audience, and her larger than life characterisation carries that off easily.

The rest of the cast follow suit, with a notable standout performance from Ben Castle Gibb in the titular role of Frankenstein (the doctor not the monster, I always get those two mixed up). He offers up an eccentric, tortured, mad scientist which matches the manic narration from Shelley. Some of the horror elements are lost slightly due to the premise, which often pulls the audience out of the story while Mary looks for ways to tell her nightmare. But, I think this works to the shows strength as it allows more of focus on darker comedy and visual storytelling which is different to anything I’ve seen yet at the New Theatre.

Speaking of visual storytelling, this show really wasn’t afraid to make a mess of the stage, which was weirdly quite satisfying. Often the cast would throw around props and pull apart the set to suit the scene, making the telling seem like controlled chaos a lot of the time. This matched up very well with the premise of the show and further proved that you can revive old classics in innovative ways. The overall design of the production was brilliantly eerie and felt fresh. Not bad for a play about a novel written two centuries ago.

Overall, I can only sing the praises of this true horror classic. Although I often prefer a little more bite from my scary tales, this production is a must see if you’re looking for a bit of a spook and a lot of suspense, with a dash of dark humour thrown in for good measure. I give this one 4 Frankensteins out of 5 monsters. Don’t miss out on this chilling piece of Halloween entertainment!

The Semi Final Welsh team has been announced