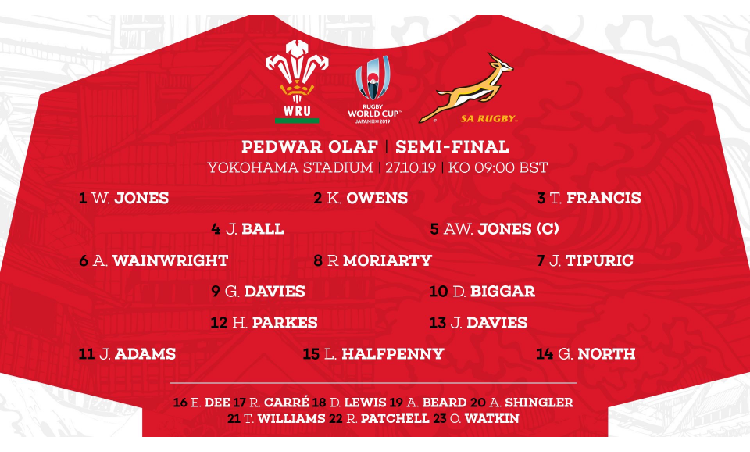 It’s Crunch time and sadly Liam Williams has been ruled out for the remainder of the Rugby World Cup following an ankle injury sustained in an accidental collision during training.

Wales have named their side for the 2019 Rugby World Cup semi-final clash against South Africa on Sunday (October 27, KO 18.00 Japan) with scrum half Gareth Davies earning his 50th cap.

Davies, who made his debut against South Africa in 2014, will continue his partnership with Dan Biggar at half-back for the game in Yokohama.

Jonathan Davies returns from injury to line-up in the midfield alongside Hadleigh Parkes whilst Leigh Halfpenny comes into the starting line-up at full-back in place of injured Liam Williams to earn his 85th cap.  Halfpenny will link up with Josh Adams and George North in the back-three.

Wyn Jones, Ken Owens and Tomas Francis once again comprise the front-row, the fifth time they have started together in this tournament.
Captain Alun Wyn Jones, who packs down alongside Jake Ball in the second-row, will move to joint-second on the all-time international appearance list on Sunday, level with Sergio Parisse on 142 tests (133 for Wales plus 9 British & Irish Lions appearances).

Aaron Wainwright, who has featured in every game for Wales at Japan 2019 lines up at six alongside Justin Tipuric and Ross Moriarty.

The Wonderful Wizard of Oz at the New Theatre

Hair The Musical arrives in Cardiff for the 50th anniversary tour.