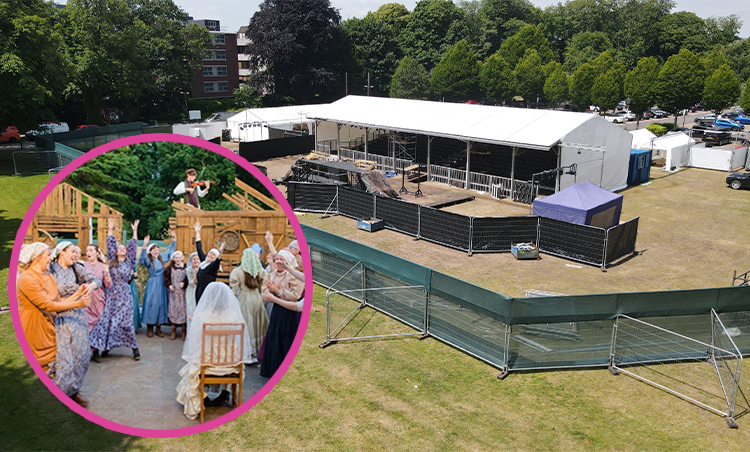 The Cardiff Open Air Theatre Festival returns to Sophia Gardens in just a few days’ time for the first time in three years.

The largest outdoor theatre festival of its kind in Wales is loved by audiences of all ages and attended by thousands right in the heart of Cardiff. This year Everyman Theatre are producing six weeks of theatre from June 23 to July 30.

Heading to the festival this summer is ‘Blackadder Goes Forth’ directed by Simon H West, the conclusion of the much-loved British series. This year’s Shakespeare production is the comedy ‘Twelfth Night’, directed by David Mercatali. The sci-fi smash-hit musical ‘Little Shop of Horrors’ is directed by Rich Tunley, with musical direction by Rob Thorne Jr.

Go Productions return to the festival once again with their family production, this year heading to East High for ‘Disney’s High School Musical, on stage!’.

Our ‘In the Park’ programme features ‘Under Milk Wood’ performed as a play for voices by Everyman Theatre, and Everyman Youth Theatre perform ‘The Comedy of Errors’.

Stand Up in the Park returns on the 3 July in association with Amnesty International, Cardiff. This year’s comedy night features Stephen Bailey, Eleanor Tiernan, and Carl Donnelly, and is compered by Clint Edwards.

The South Wales Gay Men’s Chorus and Affinity Female Voice Choir join us on the 10 July for an evening of memorable songs under the stars.

Our outdoor cinema event on the 11 July is in partnership with Pride Cymru, celebrating Pride with a screening of the extraordinary true story from Wales, showing the 2014 film of the same name.

Our purpose-built auditorium seats 400, with all audience members undercover (if it rains, only the actors get wet!), ensuring the show goes on whatever the weather. All seats are also numbered, so with tickets selling fast (and one event already sold out!), we encourage everyone to head to our website to book their tickets to guarantee the best seats in the house.

Tickets are available from our website www.cardiffopenairtheatrefestival.co.uk, or by calling our Box Office on 0333 666 3366.

We are proud to be supporting Welsh Refugee Council as our Charity Partner for the 2022 summer festival. Every year they help over 3,000 asylum seekers and refugees to build new futures through specialist advice, support, and advocacy services. On Friday 24 July we are hosting a special gala performance of Blackadder Goes Forth, with a number of high profile individuals attending, supporting the partnership and the work of both charities – Welsh Refugee Council and Everyman Theatre.

It’s 1917 and Edmund Blackadder is now a captain in the British Army at the Western Front, commanding gallant-but-dumb Lieutenant George St Barleigh and the even dumber Private S. Baldrick. Waiting in fear of the dreaded order to go ‘over the top’ from the patently insane General Melchett and his twitchy staff officer, Captain Darling. Blackadder devises serial attempts to escape the trenches, always with the offer of one of Baldrick’s cunning plans…

The conclusion of this much loved sitcom comes to Cardiff this summer.

As a ship is wrecked on the rocks, twins are separated and washed up on the island of Ilyria, forced to fend for themselves in a new land. Viola, the first twin, falls in love with Duke Orsino, who is in love with Olivia, who falls in love with Viola, and is secretly adored by Malvolio. Chaos ensues…

The meek floral assistant Seymour Krelborn stumbles across a new breed of plant he names “Audrey II” – after his co-worker crush. This foul-mouthed, R&B-singing carnivore promises unending fame and fortune. Through time, Seymour discovers Audrey II’s intent for global domination! This deviously delicious sci-fi smash-hit musical has devoured the hearts of theatre goers for over 30 years and springs to life in the heart of Cardiff this summer.

Get’cha head in the game and take a trip to the hallowed halls of East High in this specially adapted version of the smash hit Disney musical. Join Troy, Gabriella and the rest of the students as they deal with first love, friends and family whilst balancing their classes and extra-curricular activities.

Stand Up in the Park in association with Amnesty International

Review – In It Together