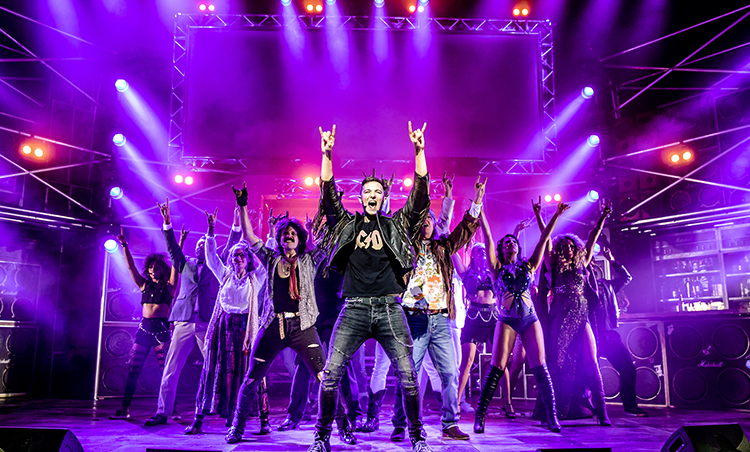 Rock of Ages is an LA love story lavished with over 25 classic rock anthems. Now a global smash-hit show, it has had extensive runs in London’s West End, on Broadway and in Las Vegas, and it’s been made in to a star studded Hollywood movie.

Now, you can lose yourself in a city and a time where the dreams are as big as the hair as Rock of Ages rocks into Cardiff’s New Theatre from 6 – 10 November.

The hilarious musical comedy features the songs, including We Built This City, The Final Countdown, Here I Go Again, Can’t Fight this Feeling and I Want To Know What Love Is, played loud and proud by an awesome live band and performed by a fabulous cast including Kevin Kennedy, Zoe Birkett and Danielle Hope.

Kevin Kennedy is best known for his portrayal of ‘Curly Watts’ in “Coronation Street”. His West End theatre credits include ‘Amos’ in “Chicago” at the Adelphi Theatre and “We Will Rock You” at the Dominion Theatre. Kevin has played both ‘Caractacus Potts’ and ‘The Child Catcher’ in the hit musical “Chitty Chitty Bang Bang”, becoming the first actor to have played both roles. He has also appeared in the national tours of the musicals “The Rocky Horror Show”, “The Commitments” and most recently Kay Mellor’s “Fat Friends”.

Zoe Birkett is probably best known as the highest placing female contestant in ITV’s Pop Idol, 2002. She most recently appeared as ‘Rachel Marron’ in the UK tour of the “The Bodyguard The Musical”. She has also appeared in the West End productions of “Priscilla Queen of the Desert” and originated the female lead in “Thriller Live”. Her other theatre credits include the ‘Acid Queen’ in “Tommy” and ‘Maureen’ in “Rent”. She can currently be seen in Channel 5’s “Get a Holiday Body”.

Danielle Hope is perhaps best-known for having won BBC One’s ‘Over the Rainbow’, which lead to her professional debut in the lead role of Dorothy in Andrew Lloyd Webber’s production of “The Wizard Of Oz” at the London Palladium. Since then, Danielle has starred as Éponine in the West End production of “Les Misérables”, as Maria in the UK tour of “The Sound Of Music”, and recently finished touring the UK as Sandy in “Grease”.

Rock of Ages (which contains serious rock ‘n’ roll debauchery!) is at Cardiff’s New Theatre from 6 – 10 November. Tickets are available from newtheatrecardiff.co.uk and on 029 2087 8889.