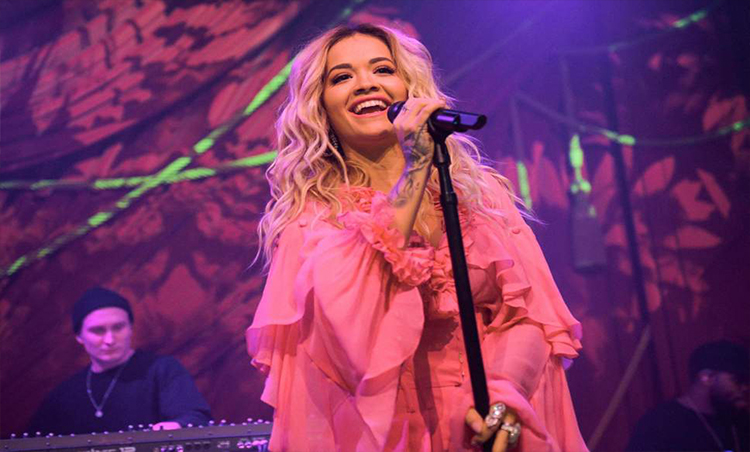 The most successful UK artist of all time on the UK official singles chart Rita Ora is coming to Cardiff on her global tour.

Tickets on sale 9am here

Model, presenter, actress, X Factor judge and responsible for some of the best pop songs of the past five years. Today she has announced that she is off on tour in 2019 and playing at the Motorpoint Arena.

It would be an understatement to say that it’s been a momentous few years for Rita Ora.

Following the release of smash hit new single ‘Let You Love Me’ and the announcement of her album ‘Phoenix’ due for release on the 23rd November via Atlantic Records, Rita Ora today announces details for her 2019 global tour.

Having performed on some of the world’s biggest shows, including ‘Jimmy Kimmel’ and ‘Ellen’ and most prestigious stages, from Glastonbury to The White House and even The Vatican, Rita will be performing at London’s iconic The O2 and travelling to Japan, Thailand, the Philippines and Europe as well as completing her first ever string of national Australian dates on the tour. The tour will be starting in Melbourne, Australia on the 1st March and finishes in Glasgow on the 29th May.

Tickets go on general sale: Friday 2 November at 9am

Rita says, “I’m so happy to be on tour again! Nothing makes me happier than performing and travelling to see all my fans. It will be first time performing news songs from ‘Phoenix’ and I can’t wait for you to hear them! I’m looking forward to this tour so much.”

The singer’s latest release,’ Let You Love Me’, became her 13th Top 10 on the Official Singles Chart. It means Rita set a new UK chart record for the most Top 10 singles by a British female artist. The star overtook music icons Shirley Bassey and Petula Clark, who each lay claim to 12 Top 10 hits.

Rita has sold a staggering seven million singles, had 13 top ten singles (five of which received platinum status and five of which are gold certified) and a number 1 platinum-selling debut album all under her belt. After appearances on Hollywood’s silver screen, she returned to music last year with a sold out, thirty-three date European tour. Her latest five hit singles have amassed over a billion Spotify streams worldwide, with global hit Your Song reaching more than 352M streams alone. It’s also her biggest hit in Europe.

Another global top ten hit arrived in August with Lonely Together, collaboration with the late musician, DJ and producer, Avicii. Singles Anywhere, For You and Girls followed, with each earning domestic and international success. Her latest hits will all be featured on her upcoming November album, Phoenix. Amazingly, it’s only her second studio album, but she’s proud, thankful and excited for its imminent release.

Rita says of new album Phoenix, “One of the most liberating feelings for me is performing and creating music. This album is a true labour of love, and it was important for me to do it my way. I’m so appreciative of the love and support from those who worked with me on the record and allowed me create something I’m really proud of. They gave me the space and freedom to create something from my heart. Both challenging and euphoric at times. I am really proud of and grateful for the journey that the making of Phoenix has taken me on. To my fans, thank you for your patience and thank you always for listening.”

Rita has already cemented herself as one of the UK’s most successful pop acts of the decade and performed around the world to critical acclaim – don’t miss your chance to see her live.

3 huge shows heading to Cardiff – here’s how to get tickets, dates & more