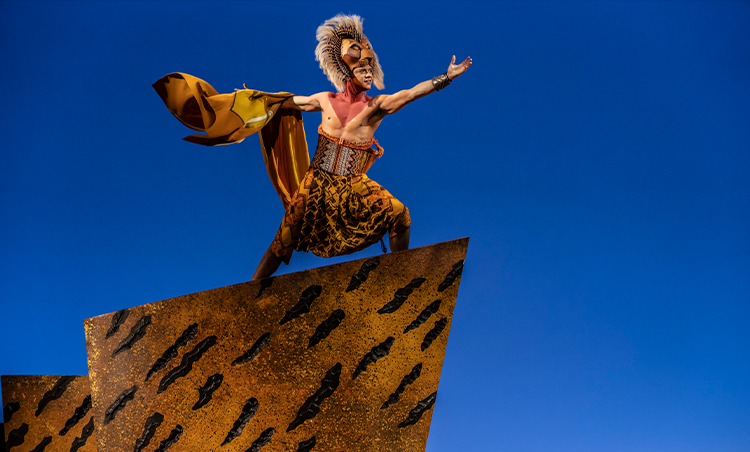 Elton John and Tim Rice’s adored and brilliantly successful musical The Lion King is a roaring success at the Wales Millennium Centre!

The show opens with The Circle of Life; the powerhouse vocals and mesmerising animal puppets set a precedent for what is to come. The amber backdrop creates a warm introduction to the African setting which is a prominent feature throughout. The stilt-created giraffes on stage coupled with the giant elephant entering the auditorium are enough to leave the audience awestruck.

Thandazile Zoni gives a very accomplished performance as Rafiki. The South African born performer conveys the eccentricity and humour of the character fantastically and with cultural authenticity, chanting in the language of Xhosa. Her vocals are flawless and emotive every time.

Zazu, the Hornbill bird is a comedic presence from the start – played by Matthew Forbes who, it is no surprise, has experience specialising in puppetry. The perfectly choreographed yet deliberately chaotic movements of both himself and the bird make for excellent Charlie Chaplin-esque characterisation.

The ensemble vocals coupled with the orchestra (lead by Jon Aspital) create an ambient atmosphere and give a voice to the African Serengeti. The immersive sounds of the plain transport you to this world, as does the effective acrobatics which bring the landscapes to life. Clever use of graphics and 3D backdrops give the illusion of movement during the stampede and the holographic style Mufasa, created through wooden shapes and lights, was also spectacular.

Chow Down is a great number, namely due to the brilliant performances from the hyenas (Rebecca Omoghebin, Simon Trinder and Owain Rhys Davies). The energy and commitment required to showcase their frantic nature is beyond comprehension. Their fantastic voices and raucous laughs almost steal the show.

Despite playing the part with great conviction, the vocal prowess of Simba, both young and old, was lacking. Songs such as I Just Can’t Wait to Be King and Endless Night could have done with a bit more gusto and power. No such complaint, however, with Jean-Luc Guizonne’s (Mufasa) rendition of They Live in You which was vocally powerful and captivating.

Swooping in to steal the show are Timon (Alan McHale) and Pumbaa (Carl Sanderson) whose presence is huge! Their costumes/puppets were so realistic and their comedic effect on the audience was clear. As a double act, the charisma was spot on and their silly skits complete with thick Brooklyn accents was top quality.

One criticism is that the second act seemed to drag at times with each sequence feeling a little samey. Act two initially seems to suffer from a lack of showstopping numbers with the exception of Shadowland; Nokwanda Khuzwayo (Nala) gave a hauntingly beautiful performance of the song and her choreography was almost hypnotising.

For anyone who is yet to see the stage production of Disney’s The Lion King, know this: it is well and truly a masterpiece. Despite any opinions regarding the performances, the sheer talent, dedication and hard-work that goes into creating this show is second to none. From the set design to the puppetry, the costumes and makeup, as well as the staging and choreography, producing The Lion King is no mean feat and everyone involved in bringing it to stages across the UK should be applauded.

The Lion King is at the Wales Millennium Centre until August 27, 2022.

Tickets can be bought at: The Lion King | Wales Millennium Centre (wmc.org.uk)

The Panto Aladdin at the New Theatre has been rescheduled to next year.