Author It's On Editorial 790 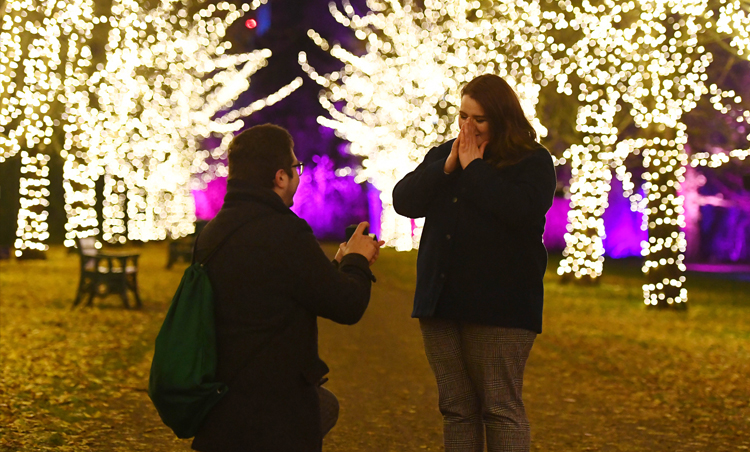 Love and light in the heart of the city – a romantic proposal for Christmas at Bute Park Lovestruck graduate brings festive feels to Wales’ biggest ever Christmas lights trail and gets on bended knee at its ‘Beating Heart’ installation Visitors to Wales’ biggest ever Christmas lights trail were treated to all the festive feels when a young graduate got down on one knee and proposed to his girlfriend during its opening weekend. Adam Clement asked his partner of four years, Cassie Kilby, to be his wife in front of stunned and delighted visitors enjoying the first ever Christmas at Bute Park, which opened to the public last week (November 25th). The pair have been together since 2017, when they met as students on the same course at the University of South Wales, and where they both recently graduated from. A delighted Cassie, who lives with Adam in Cardiff, said ‘yes’ at a section of the trail, appropriately entitled ‘Our Beating Heart’, which appears to be beating as it is lit with pulsing rays from all angles and creating a stunning backdrop of swirling, shimmering light perfect for the occasion. For festive fan Adam, now a Visual Content Developer with Cardiff medical specialist Intelligent Ultrasound, Cassie’s acceptance was not only the perfect way to round off months of planning but a magical way to kick off Christmas 2021 too. “I’ve been planning on proposing all year and have always been stuck on the ‘where to do it’ part as I wanted it to be something spectacular and memorable, and then I happened to stumble on the advert for Christmas at Bute Park,” Adam said. “After watching the video and reading more about it, I knew it was the perfect opportunity and setting. I myself am a mad Christmas fanatic, so I was immediately drawn to it.” “I was quite nervous but overall, I’m just so excited about the whole experience as it’s the next big step in the adventure that is our relationship, and I’m so glad we got such a beautiful place to do it in,” he added. Now Adam, who is originally from Swansea, and Cassie, who grew up in Hengoed, Caerphilly, are looking forward to spending their first Christmas as an engaged couple together before planning for their nuptials starts in earnest next year. The couple also enjoyed the rest of the spectacular Christmas at Bute Park lights trail immediately after Adam’s proposal took place, alongside more than 130,000 visitors who are expected to have followed suit before the trail closes again on New Year’s Eve.
Preview post

The Alchemist gift customers with a FREE cocktail in exchange of a tin of food!

The Historical Grand Bar & Kitchen Returns to Cardiff This Weekend!