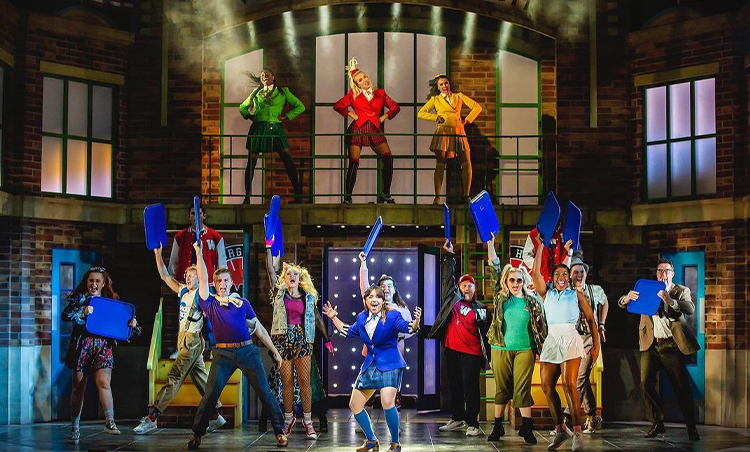 Heathers the musical wowed the audience at the Wales Millennium centre

Strutting into the Wales Millennium Centre this week, Heathers The Musical brings all the sass, quick wit, and dark comedy of the 1988 and so much more. We attended the opening night of the award-winning West End musical smash hit where the whole cast nearly blew the roof off the Donald Gordon theatre, in more ways than one! With a killer cast, big musical numbers, and creative sets you cannot go wrong with a trip to the home of the Rottweilers this week at the WMC.

Following the misadventures of Westerberg High’s Veronica Sawyer as she attempts to climb the social ladder by befriending vicious social overlords, the Heathers. Things don’t quite go according to plan when the badass new kid JD brings a little too much realism to the phrase ‘I’d kill to be popular’. If you know nothing about Heathers, either the 1988 film or Kevin Murphy and Laurence O’Keefe’s musical, then think of it as a Mean Girls crossed with high school musical, with a light sprinkling of murder!

The original music in this show is absolutely everything you’d expect from a classic Breakfast Club style high school dark comedy musical. The songs just keep getting bigger and bigger as the tension builds towards the grand finale, the cast performing them with enough energy to keep the Christmas lights on down St Mary’s street for a whole week. The live band performing the music must need an ice bath after every show because they worked their asses off, bringing the big hits like Candy Store, Dead Girl Walking and Seventeen to life.

Its is undoubtable that one of the main highlights of the show is seeing the Heathers, ruling the school with an iron fist that would make Regina George proud. The terrifying and godly trio are brough to life by Madison First, Merryl Ansah and Lizzy Parker who all absolutely killed it! The whole cast may have brought the energy but the Heathers harnessed it and earned their names on the poster out front. Also brilliant were the creepy, skin crawling, handsy, but somehow still hilarious Jocks Liam Doyle and Rory Phelan who nailed so many well timed physical gags, making them the standout comedic presence on stage.

But the absolute powerhouse in the centre of nearly every scene of the show, was Veronica herself Rebecca Wickes. Belting out big numbers and ultimately proving she may not run the high school, but she certainly rules the stage. As JD says; the extreme always seems to make an impression, and Wickes took musical theatre to the extreme.

Overall, Heathers was everything we wanted and more from a cult 80’s musical adaption. It elevates the original film out of cult status and turns it into somethings that’s a sexy musical masterpiece. Whether you love the film or not, you will love Heathers, it’s been a long time coming but it was absolutely worth the wait. We give this one five out five killer queens and we could not recommend it anymore!

If you are looking for a treat to end the year with a bang, this is it! Tickets are available via the Wales Millennium Centre website

There’s a Louisiana Crawfish pop-up coming to the city