Author It's On Editorial 831 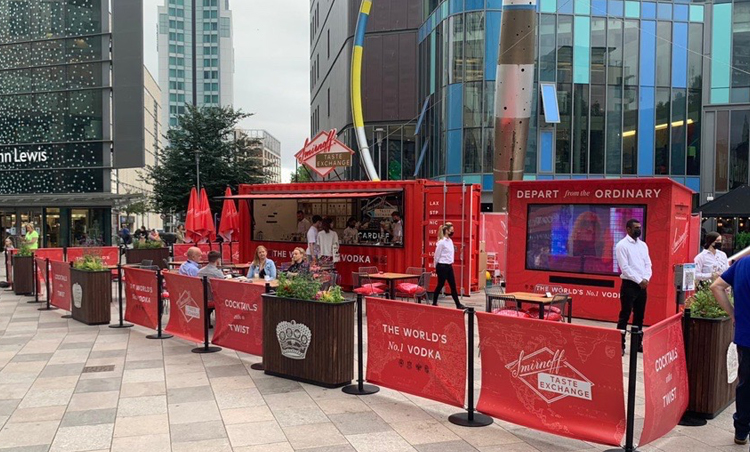 A Smirnoff immersive pop-up bar has set up outside the library this weekend!

The World’s Leading Vodka brand* is inviting you to depart from the ordinary and join them on a globe-trotting journey of flavour discovery, at the Smirnoff Taste Exchange.

A travelling pop-up experience of sensory delights, the tour will journey through Cardiff, Manchester, and Liverpool this August, with its final destination in London from September.

The Smirnoff Taste Exchange is an immersive, pop-up experience, that aims to inspire and educate consumers to depart from their ordinary vodka drinks and exchange them for new and delicious cocktails by adding a Smirnoff twist. Our interactive Departure Board will generate a suggested elevated cocktail from our carefully crafted Smirnoff drinks menu based off consumers taste preferences. Why not order a Vodka Martini Cocktail with a Raspberry Crush flair, or a Vodka Soda complete with a Fever-Tree Mexican Lime or Italian Blood Orange soda?

Celebrating global references and inspiration, each stop of the tour has also worked with a local bartender to create an exclusive cocktail for its city to enjoy. For Cardiff, we are creating the Cardiff Mule, made with Smirnoff Vanilla Vodka, red chilli, ginger and cooling lime.

With Cardiff the first stop on the tour at St David’s Place on 11th August and departing 15th August, we invite all flavour seekers and those up for a summer of discovery to join us, alongside some of Smirnoff’s local tastemakers.

The interactive departure board is activated by scanning a QR code with your phone, where you’ll be guided to discover and build your Smirnoff cocktail with a twist through a series of taste-preference related questions. With the departure board updating your selection in real time, your cocktail will then be revealed. You then show your phone at the bar with your drink selection and the local mixologist will create it for you.

The drink of choice will be served alongside a bag of flavoured popcorn for flavour elevation and a specially designed departure ticket, containing the unique drink recipe and cocktail story.

The Taste Exchange is a shipping container that will be touring the country with stops at:

There's a Huge Light Trail Coming To Cardiff This Christmas

Much awaited Cardiff Wine Festival comes to the Principality Stadium