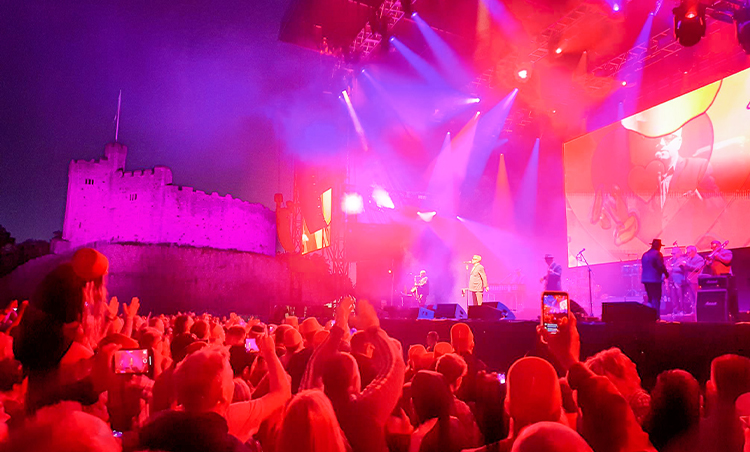 Cardiff Castle transformed into a House of Fun with a mammoth 20-song set from ska legends Madness.

Once performing atop Buckingham Palace, who better to commemorate British royalty than ska royalty themselves, Madness. Coming full circle since their Diamond Jubilee performance in 2012, Madness gave Cardiff a night to remember for the Platinum Jubilee celebrations.

The castle was a perfect setting for this blockbuster event, with a giant stage erected in the grounds, lit up against the backdrop of the stunning architecture. The lighting and sound were magnificent and a great summer’s evening filled with fantastic music ensued.

First, Norman Jaye MBE got the crowd warmed up with a DJ set, with his unique brand of ska fusion. The crowd, eagerly anticipating the arrival of the headliners, were singing and dancing to the music. When the time came for Madness to take to the stage, lead singer Suggs sauntered out to raucous applause with the confidence of a man who has been there and done it over decades of hit-making success.

With Madness’ longevity, you’d be forgiven for thinking this would appeal to audience members of a certain age and whilst that may be true, there was, as Suggs put it – all shapes, sizes and ages – and it was nice to see young people there too.

Opening with instrumental crowd pleaser One Step Beyond made sure Madness kicked off their Cardiff show with a bang. The crowd were pumped up and bouncing, a sea of fez hats moving in unison before the stage.

Prince Buster, a tribute to the man who made ska what it is today, also got the crowd rocking. Likewise, Wings of a Dove was a standout number, the iconic whoah-ohs prompting mass singalongs. New song Baby Burglar shows that Madness still have what it takes to write a hit song and are as relevant as they ever were.

The show of musicianship was stellar, but you don’t hone your craft for all these years without being good at it; the timing and unity were immaculate. In particular, saxophonist Lee Jay Thompson was outstanding, contributing to the unique ska sound with effortless flair.

With a backdrop of continuous graphics, video clips and animations (in particular, a topical skit of the Tory party accompanying They Call It Madness) ensured Madness put on an audio-visual spectacle…although just watching them perform is a spectacle in itself. Suggs commanded the stage all night, his charisma and stage presence shining through.

There was a slight lull halfway through the set, with some slower and perhaps lesser-known songs but they more than made up for it with a plethora of hits such as House of Fun, Baggy Trousers, Our House and finally, It Must Be Love running through to the end, keeping the crowd entertained.

Finishing with an encore of They Call it Madness and Night Boat to Cairo, Madness certainly did what they came here to do. The British icons showed their talent and the crowd showed their admiration, the legendary ska ten-piece showed their true Nutty Boys reputation in a fun-filled celebration.

Ending the night with Always Look on the Bright Side of Life playing out over the sound system, cemented the truly British affair in honour of Her Majesty the Queen (and the two-day bank holiday, of course!)

Order Up! Waitress starts it’s shift at the Millennium Centre this week