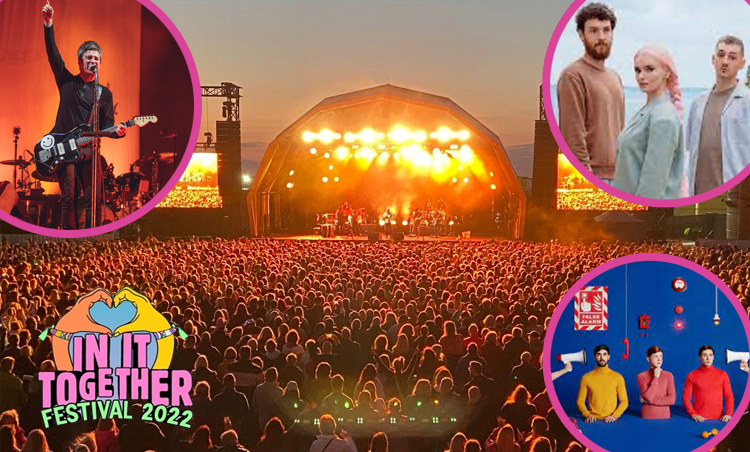 New three day festival ‘In It Together Festival” will bring something to the lush Welsh valleys this weekend.

Dubbed the ‘Welsh Glastonbury’, In It Together Festival kicks off its first year this Friday! We will be going along to catch all the action and cannot wait to see some world class music blasting out of Old Park Farm in Margam. We’ve put together a list of just some of the acts we are absolutely buzzing to see.

The Northern Irish trio have reached indie cult status over their 15 year career, pumping out bangers like What You Know, Undercover Martyn and Once. They’re on the main stage for the opening night of the festival and we couldn’t think of a better way to kick of this festival of togetherness.

An undeniable king of the Brit Rock scene. Noel and his High Flying Birds are the big billed Saturday showstopper on the Parc Stage. Just imagine that warm summer night buzz when Heat Of The Moment comes on and thousands of music fans jump along to the beat. Its going to be magical.

Closing out the mainstage on Sunday is electro music group Clean Bandit. They’re one of those bands that never fail to produce bangers that often become massive party anthems. They blew Cardiff away a few years ago at Depot In The Castle and we’re itching to see them again.

The legend of all things funk and soul, Mr Craig Charles, is warming up the main stage on Saturday night. Taking a break from his usual spots on BBC Radio 2 and 6, any regular listener will know that Charles knows how to bring the party vibes.

With a career spanning three decades, Armand Van Helden is often considered one of the pinnacle figureheads in the house music genre. Few can rival the American DJ’s career, he’s played every major venue and worked with some industry legends. My My My are we buzzing to see what he pulls out the bag for us on the Friday night on the Panchaia stage.

Closing the Panchaia stage on Sunday night Drum n Bass powerhouse Hybrid Minds are breezing through South Wales to bring the house down in style. Already this summer they’ve played Connected Festival, EDC Las Vegas and Creamfields so they’re pretty warmed up. We can’t wait to see what they’ve got for us.

It’s Written In The Stars, on Friday night we’ll be Drinking From The Bottle until we Pass Out. Tinie Tempah is bringing the party vibes to Old Park Farm. Seriously his songs were the soundtrack to the first few years of the 2010’s and we’re ready to relive them all together this weekend.

Its Saturday night and you gotta Keep On Movin’ to Jazzie’s Groove as Soul II Soul bring us Back To Life after a massive opening night. Providing much of the sounds of the 90’s the legendary British R&B/Soul group are hitting up the main stage, building us up for another night of festival madness.

If you told me that at some point in your life you didn’t blast out some of these tunes whilst daydreaming about your crush, I’d have to call you a big fat fibber. She’s So Lovely, This Ain’t A Love Song, It’s Not About You, Heartbeat… Elvis Ain’t Dead! The ultimate soundtrack to everyone’s personal teenage romance is being performed live on the mainstage Sunday night. Scouting For Girls are back babeey!

Did someone order a Welsh language indie rock group from Carmarthen? Yes please. After seeing this trio supporting IDLES at their recent Cardiff show we are so excited to see them again. They will be appearing on The Paddock stage on Friday night.

A self-described kick-ass rock band from Cardiff and affectionately referred as Prince, Incubus and Skynyrd’s lovechild by local music aficionado Minty’s Gig guide. They only made their debut in 2019 so we’ve struggled to see them during the pandemic. We can’t wait to see what they can do now the restrictions are finally gone!

Finding surprise fame after her hit single ‘Stay’ was featured on the Love Island soundtrack, the young Welsh artist has had an impressive start to her career. We were lucky enough to catch her at Cardiff’s Sŵn Festival last year and we’re excited to see her on The Paddock stage on Sunday.

The musical comedian rose to fame on Britain’s Got Talent and captured the hearts of the nation. He’s been touring ever since and is now bringing his keyboard and comedy skills to the Wonky Lizzard stage on the Friday night.

A Cardiff local, Robin is a regular writer, podcaster, and performer of comedy. You can catch him most weeks as the regular compere in the Glee Club down the Bay… Or you can also see him on the Wonky Lizzard stage. As a semi-regular of good time Thursdays at the Glee Club I can guarantee you’re in for plenty of laughs if you catch his set.

Co-host of the Spit Or Swallow podcast (not as dirty as it sounds), and regularly appearing on your telly on the BBC, CBBC, ITV & Channel 4 and your radio on BBC Radio 4, 3 & R4 Extra. She’s everywhere! And for good reason. She’s filthy, fabulous, and hilarious and absolutely not to be missed.

And that’s our list of some absolutely stunning acts you can catch over the In It Together Festival. This is just a fraction of the acts on over the weekend, there really is something on for everyone. Check out the website for a full rundown of the weekend. We cannot wait to get there on Friday and start exploring!