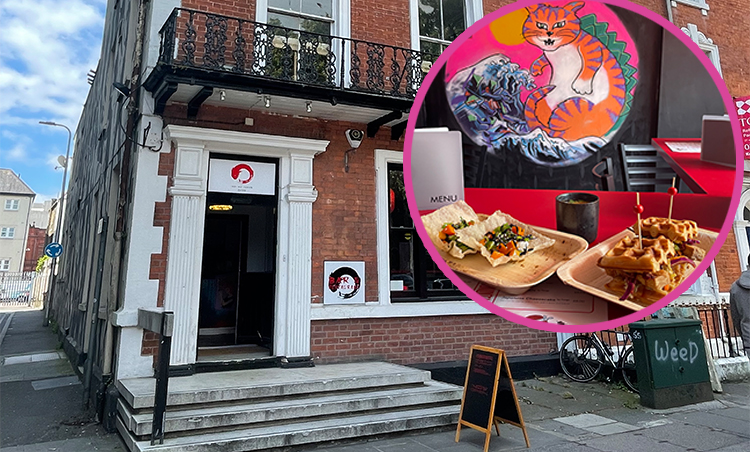 The former home of the iconic Buffalo bar reopens as a Japanese Izakaya.

Izakaya is Japan’s take on the pub, meaning “stay-drink-place”. Visitors can expect alcoholic drinks and “snacks” in an informal and laid-back setting. Koi No Yokan is providing just that with the promise of cocktails and modern fusion small plates, delicious highballs and some classy Japanese whiskey, according to owner Alexander Taylor. Similar in structure to tapas dining, this Izakaya is what Alex believed Cardiff was missing.

Taking over the unoccupied Buffalo bar on Windsor Place, the new venture will offer a place for co-workers and friends to unwind. Koi restaurant will operate on the ground floor whilst the first floor, to the delight of Cardiff locals, will reopen as the much-loved and missed Buffalo bar. Stay tuned for Buffalo’s reopening in September where there will be: “disco drinks, cold beer, and total commitment to showcasing local talent.” But for now, it’s all about Koi!

The Japanese bar and restaurant has been in the works for a while and owner Alexander admits it has been a taxing process. However, the grand unveiling is now in sight with Koi No Yokan open to the public as of Thursday 7th July 2022 at 12pm. It will be open 7 days a week (a lucky number in Japan!) until 12am on weeknights and 2am on weekends.

Punters can expect Japanese-inspired interiors complete with lanterns, red lighting and fluorescent colours that bring disco vibes. Red booths and Japanese room dividers adorned with manga will also add to the aesthetic, as well as an engraved gold epoxy resin dragon and a bright mural. Koi will bring a traditional Japanese atmosphere to the city for people to bask in and appreciate.

Despite opening on the 7th day of the 7th month – Alexander and co. won’t need luck with the exciting menu they have in store. The chefs have been working tirelessly to devise authentic, appealing and accessible dishes. These include Sando (otherwise known as Japanese fried chicken); poki bowls, an array of desserts and what Alex describes as: “delicious, modern, naughty Japanese-inspired small plates and bento boxes”.

These dishes often come with a twist, fusing modern food with traditional Japanese cuisine. Not only that, Koi have tried to make their menu as gluten-free as possible allowing for dietary needs. In the same vein there will be loads of vegan options available, with most dishes having a plant-based equivalent so everyone can try Koi’s creative recipes.

The late-night bar is lead by Alex and general manager Giverny Nixon, who have already achieved success with cocktail bar Pennyroyal on High Street. Whilst they’re experienced in the art of cocktail making in their other venture, Koi will of course take inspiration from Japanese bar culture, offering a large range of Sake and Japanese whiskey.

Koi No Yokan is an “untranslatable” Japanese phrase that describes the feeling upon first meeting that you will inevitably fall in love; in his vision for this new venture, Alex must surely predict that exact response from the public.

Find Koi No Yokan at 11 Windsor Place, Cardiff, CF10 3BY. Don’t forget to book your visit at: https://bookings.designmynight.com/book… and follow @koicardiff on Facebook.

Summer Of Fun Is Set To Return This Summer