Author It's On Editorial 598 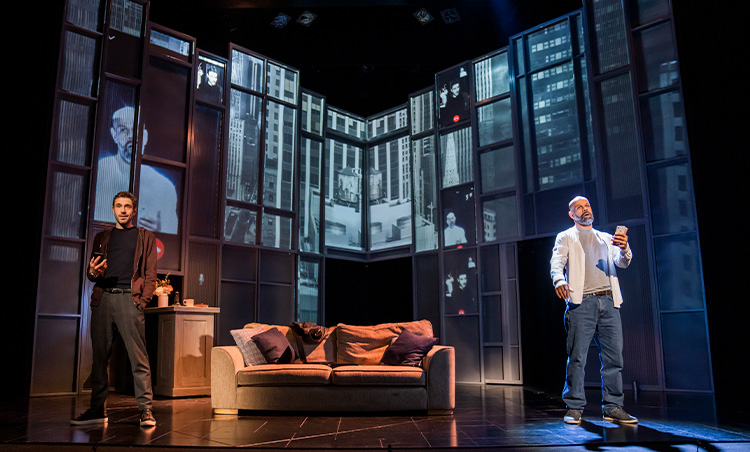 When Fatal Attraction opened in cinemas in 1987 it captivated and terrified filmgoers, garnered multiple Oscar nominations and became that year’s biggest global hit, raking in more than $320 million against a $14 million budget.

​More than three decades later the chilling and provocative tale of an extra-marital affair gone horribly wrong is coming to the stage for the first-time ever, with director Loveday Ingram promising: “Audiences will go away having had an invigorating, stimulating evening that shocks and surprises as well as making them question choices they have made in the past or could make in the future. It’s gripping and thrilling and it’s a real emotional rollercoaster.”

​With Susie Amy, Oliver Farnworth and Louise Redknapp heading the cast, the play remains true to the core story of New York lawyer Dan Gallagher whose fling with book editor Alex Forrest starts out casual but soon escalates into a reign of terror when she refuses to accept it’s over.

But there are surprises in store for fans of the film who think they know all the twists and turns. “It isn’t exactly the same as the film,” the director teases, “and the outcome resolves in a different way.”

​Ingram (who has worked extensively in the West End and around the UK) also believes Alex’s behaviour will be viewed differently now than it was in the 80s. “Our attitudes towards mental health have changed so much since 1987, as they have towards emotional support. It’s inevitable that people will look at the character of Alex in a different light.”

​Writer James Dearden penned the Oscar-nominated screenplay (which was in turn based on his 1980 short film Diversion) and the movie also scored Oscar nominations for Best Picture, Best Director for Adrian Lyne, Best Actress for Glenn Close, Best Supporting Actress for Anne Archer and Best Editing, with Michael Douglas omitted from the list but winning that year’s Academy Award for Best Actor in Wall Street.

​It inspired other psychosexual thrillers like the hugely successful Basic Instinct and the critically-panned Sliver but Fatal Attraction remains the genre’s most enduring classic, with Loveday noting: “The play, like the film, asks questions, challenges, surprises and shocks, and if we get it right every person in the audience will be going ‘Oh my God, that could happen to me if I made the wrong choice at the wrong time’.”

With Dearden also adapting the film for the stage, Fatal Attraction is the latest edge-of-the-seat thriller from Smith and Brant Theatricals and Ambassador Theatre Group Productions after their acclaimed tours of Gaslight and Strangers on a Train.

​“And James’s adaptation is stunning,” the director enthuses. “It’s slick and engaging. The dialogue is electrifying and bites to the core of the story. He’s taken the heart of the film, stripped it back and put it on stage to great effect.”

​Set in the present day, the stage version features contemporary technology like mobile phones with projections of video calls. “One of the things that drew me to it is that it’s about consent and people stepping into the danger zone,” Loveday says. “It’s about responsibility and trust and crossing the line. To bring that to life in a way that works for contemporary audiences, we’ve shifted it more towards the technology that we all use to communicate every day. Stalking and social media intrusion are all part of that.”

​Do we still get the infamous bunny boiling scene? She laughs. “Now that would be giving it away, wouldn’t it?”

​Having played Dan’s wife Beth for eight weeks while Kym Marsh starred as Alex, Susie Amy has now stepped into the latter role and is relishing the challenge. “I’m really enjoying exploring another character and it’s a huge role in terms of the emotional arc she goes through,” says Susie, who became a household name as Chardonnay on Footballers’ Wives and who has appeared in Echo Beach and Hollyoaks on TV and Wait Until Dark and After Juliet on stage.

​“Alex is a rollercoaster of passion, anger, hurt and feeling letdown. At first we see her as this vivacious, appealing woman who is very attractive to men because she listens, laughs and appears to be very confident and independent. Then we see all that unravel throughout the play.”

​Susie agrees Alex’s behaviour would be viewed very differently now. “Of course there are elements of Alex’s behaviour that I personally find hard to justify, but when you watch the play I think you can hugely sympathise with her in terms of how Dan treats her, like ‘We’ve had a one-night stand, now you need to go away and keep your mouth shut’. Actions have consequences and while back in the day she was labelled as a psycho or a crazy person nowadays we know a lot more about mental health.”

​Is she daunted about following in Glenn Close’s shoes? “It’s daunting following in KymMarsh’s footsteps,” Susie laughs. “She was absolutely superb in the role. But obviously Glenn Close was wonderful and it’s one of my favourite films.”

​Having also been in Rehearsal for Murder and Murder on the Nile, the Londoner thinks theatregoers love a good stage thriller because of the shared up-close experience. “And at the moment it’s just thrilling to go into a theatre after the last couple of years, let alone to watch something that’s such an edge-of-the-seat, thought-provoking night out. It shows how one bad decision can cause a real domino effect.”

​Starring opposite Susie as Dan Gallagher is Oliver Farnworth, who was in Hollyoaks and Coronation Street on television as well as working extensively in theatre in such shows as Beautiful Thing, Under Milk Wood and The Girl on the Train.

​Halifax-born Oliver views Dan as an alpha male who’s at the top of his game at work. “He’s kind of a lion who says what he means and gets what he wants but even though he presents as the wholesome American family guy he has resentments and flaws. He’s entering middle age and feels like he’s losing his youth, and his life in New York is gradually slipping away from him as he’s moving out to the suburbs. He’s not quite ready for that and he’s led astray by temptation.”

​In the film Dan maybe comes across as the victim of Alex’s obsessions but, without giving spoilers, Farnworth feels the play redresses that because Alex is an independent single woman and it’s Dan who cheats on his wife and lies to cover up the affair. “And we’re looking at the potential impact of mental health, which is possibly an underlying feature of Alex’s character, and we’re looking at Dan’s flaws. It’s a more measured view.”

​The inclusion of mobile phones and other technology, the actor believes, adds to the suspense. “It’s harder to remain anonymous. Everyone knows what everyone else is doing and that ramps up the tension. It leads to a lot of tense moments and adds some new twists.”

Dan’s wife Beth is played by Louise Redknapp, who came to fame in the girl group Eternal in the early 90s and has since had a hugely successful solo career as well as branching out into theatre and presenting.

​“When they first asked me about playing Beth I wasn’t sure because I’d never done a straight play before, just musicals,” admits Louise, who played Sally Bowles in Cabaret on tour and was in 9 To 5 The Musical in the West End and around the country. “But then I went to see it and it was really well put-together, really gripping and I thought it would be a new challenge for me.

​“It’s completely different to anything I’ve done before and I feel really lucky that at this stage in my life I’m still getting offered new jobs and opportunities. It’d be very easy to sit back and do what I’ve always done rather than trying to push myself but I know how important it is to keep growing and to keep learning.”

​In the film version Beth sometimes comes across as being too good to be true. “But that’s just because, at least in the beginning, she’s really happy,” Redknapp reasons. “She is married, starting a family, with a husband who is doing well at work. She’s given up her job and is creating a home for them, so initially she’s in a really settled and happy place in her life. But then things change and in the play she’s nobody’s fool. She’s quite sassy and she’s a strong woman – especially given what she eventually has to deal with in the story. I think there are a lot of layers to Beth.”

Take That tour: How to get tickets for their Cardiff stop

Coffee Barker is getting ready to open a Rum and Fizz bar.

Author It's On Editorial 853
Don’t miss the L.O.L Surprise! Dolls first ever appearance in Wales For those of you with children, you’re probably familiar with the incredibly popular...
Read More