Author It's On Editorial 519 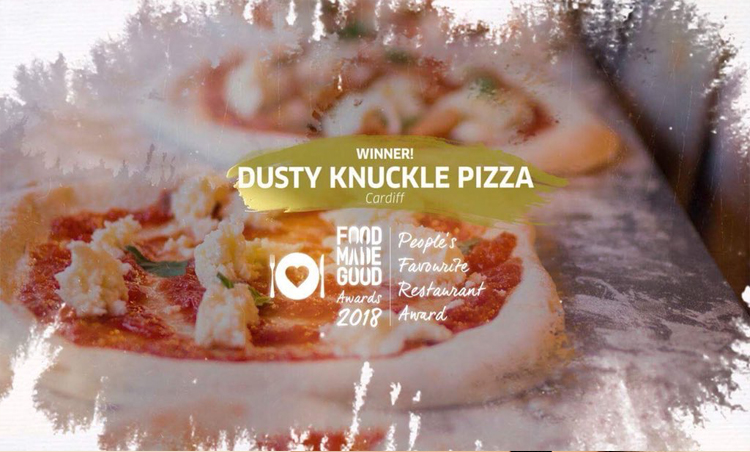 Dusty Knuckle pizzeria which champions the ‘Slow Food’ ethos has won a national award for demonstrating an exceptional commitment to sustainable practices.

Hundreds of sustainable eateries were originally nominated by members of the public. A team of foodie judges then chose the three businesses who they felt did the most to champion local producers, reduce waste and support their local community.

The overall winner was decided by public vote, but the Canton-based restaurant faced fierce competition for the top spot; also in the running was the Michelin Star Black Swan restaurant in Yorkshire, and the hugely popular Breakfast Club diner in Soho, London.

At the star-studded award ceremony last night, chef Raymond Blanc OBE revealed that Dusty Knuckle had received the most public votes in the shortlist, making them 2018’s Food Made Good ‘people’s favourite restaurant’.

Dusty Knuckle founder and head chef Phill Lewis said he was ‘gob smacked’ at the result, explaining, “Last night was so surreal. We were up against two really big names with huge social media followings, so we didn’t feel like we had much of a chance of winning, but people really got behind us and made it happen. We can’t thank everyone enough for voting for us.”

Absolutely stoked to win ‘people’s favourite’ at the @the_SRA’s @FoodMadeGood awards tonight – a HUGE THANK YOU to everyone who voted for us and made this happen!

He continued, “Next year is going to be a very big year for us – we can’t say exactly what we’re up to just yet but picking up this award before it all kicks off has given us a real boost; we can’t wait to reveal what else we have planned. All we can say for now is watch this space!”