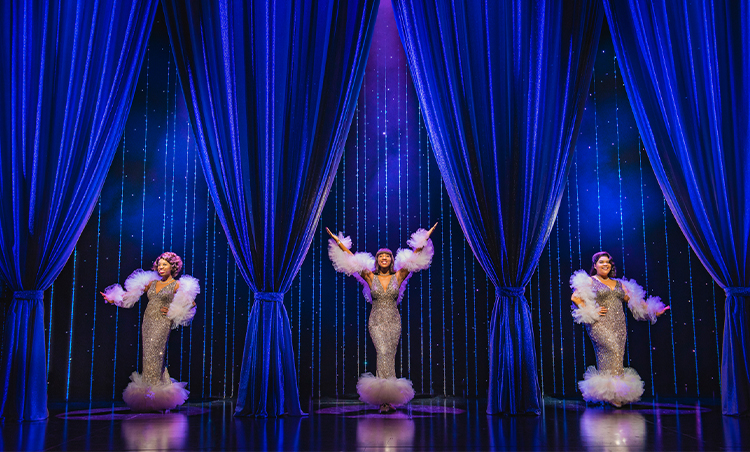 The Spectacular Dreams have taken residency in the Wales Millennium Centre in a dazzling display of music and soul. The world famous Dreamgirls tour has finally come to Wales after decades of exhilarating fans in Broadway and The West End. If you have any love for disco, funk, R&B or just music in general then this show is absolutely unmissable. We attended the opening night of Tom Eyen’s blockbuster musical, and we were absolutely blown away.

Although the creators of Dreamgirls have always strongly denied claims the show is based on the career of The Supremes in the 60’s and 70’s, the parallels between them and the rise of The Dreams are hard to ignore. There’s even a theory that the character of James “Thunder” Early is based on Welsh megastar Tom Jones who had a relationship with Supremes backing singer Mary Wilson in that time. Whether these rumours are true or not, the show you see on stage is a love letter to one of the greatest eras of Black Motown singers of all time, the drawing its inspiration from a wide collection of larger than life stars like James Brown, The Shirelles, Martha and the Vandellas and Little Richard. The music in the show as a result is a stunning ode to a golden age of showbusiness.

One of the greatest joys of Dreamgirls is the strong visuals created by set and costume that transport the audience across the USA as the Dreams rise to stardom. The ingenious moving sets was one of the best examples I think I’ve ever seen of a show utilising as much of the stage as possible, often having singers turning their backs to the audience and making us feel like part of the backstage crew. Everything about the musical just flowed together seamlessly, feeling more like one continuous scene that kept building in complexity and sound. The costumes on display, in particular the divine long ballgowns worn by the title trio, are honestly worth admission alone and would not look out of place in a gallery at a fashion museum. Truly you could tell that this show has built on its 40 year legacy to deliver a slick, stylish show, pulling the audience along for a ride from the moment the curtain rises.

Undoubtably, the reason you should see this musical above all others is the staggering musical talent of the performance on and off stage. Even if you had none of the gorgeous sets and costumes, and we had just been to see the singers on stage accompanied by the live band, Dreamgirls would still been one of the best musicals I’ve seen of all time. Every note was pitch perfect, every instrument finely tuned, and every song was simply flawless. The astoundingly talented Nicole Raquel Dennis in the role of Effie White deserves as much praise as it is possible to give. The vocal range and raw power in her voice sent goosebumps through the audience on multiple occasions and earned herself a standing ovation mid-show when she nearly brought the roof down with ‘And I Am Telling You I’m Not Going’ in the first act. Its impossible to think of a bad word to say about Dennis’ performance, she was absolutely divine.

I’m sure you’ve gathered by now I absolutely loved Dreamgirls. Not only did it have complex characters and a gripping plot, but a seemly endless well of musical talent that should be experienced by every single person who’s able to get to the Wales Millennium Centre this month. An easy 5 Stars, Dreamgirls is utterly superb!

Running time: Approximately 2 hours and 35 minutes (including one interval)