Author It's On Editorial 107 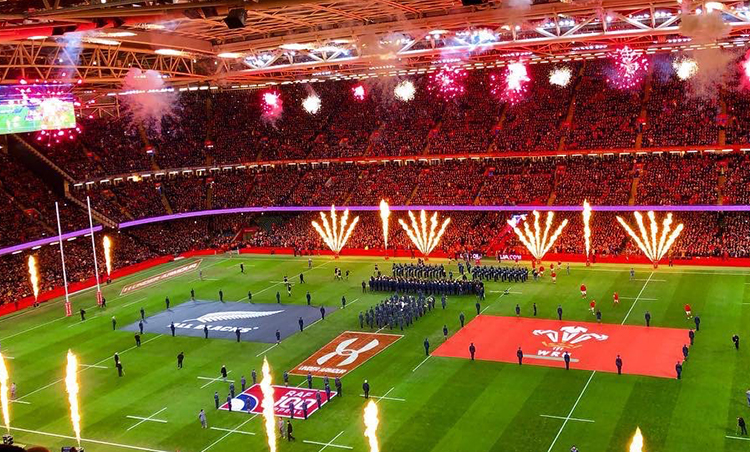 One of the toughest Autumn Series schedules in Cardiff to date is confirmed.

A climactic clash with the reigning Rugby World Cup champion Springboks brings down the curtain on a four-match series which starts with Fiji’s flying visit to Principality Stadium on Saturday 7th November, kick-off 1.00pm.

Next up the All Blacks are in town on Saturday 14th November at 5.30pm, before Los Pumas, who last won in Cardiff in November 2012, roll-up in the third round on Sunday 22nd of November, kick-off 2.15pm.

By the time Wayne Pivac’s Wales take on South Africa on Saturday 28th November at 5.30pm they will have faced every side in World Rugby’s top 10 – minus Australia (8th) – during his first year (12 Tests) at the helm, plus 11th placed Fiji.

The 2020 Autumn Series also see a new era of collaboration for the Six Nations Unions and Federations after taking the ambitious decision to combine all broadcasting rights for their autumn internationals, a strategy that has long been in place for the Guinness Six Nations Championship tournament.
Supporters benefit directly as all parties agree to games being scheduled around each other to minimise any overlap in fixtures, so more games can be enjoyed by more rugby fans.

“Working collaboratively with fellow Six Nations members on matters of mutual sporting and commercial interest outside the Guinness Six Nations Championship, for the first time, has led to scheduling that is far more spectator friendly,” said WRU chief executive Martyn Phillips.
“A co-ordinated approach, similar to the one already employed when facilitating the Championship fixtures, has removed the majority of schedule clashes and we are extremely grateful to all parties for their sympathetic treatment of the unique and particular requirements of our Cardiff city centre venue.

“We are delighted with three Saturday afternoonmatches and an early Sunday kick-off which shows real empathy to supporters in Wales and to our travel infrastructure.

“This is the first step in the process of unifying the operations and media rights of the Six Nations and Federations, something we have been working on for a long time, it is a hugely significant strategic development for our national game and will be of direct benefit supporters who will be able to watch more live matches as a result.”

A two-Test tour to World No.1 side New Zealand in July and a one-off 27th June overseas clash with Japan, who rank 8th, are first on the fixture list for Wales following the Guinness Six Nations Championship clashes with Europe’s finest currently at play, meaning Australia are the only top 10 side Wales will not face in 2020.

The Pumas, who are ranked 10th, and Fiji have both won once and lost to Wales five times since the turn of the century, but the home nation doesn’t need reminding that victory over the All Blacks has remained elusive since 1953.
When the flying Fijians, who open the series, did beat Wales it was a highly notable win knocking them out of the 2007 World Cup in France at the group stages.  This clash was also followed by a 16-16 draw three years later in the 2010 November series, but Wales’ record against Fiji is unblemished in four matches since.

South Africa were impossible to beat in the early 2000s, putting together an eight match unbeaten run after Wales’ debut victory over them in nearly 100 years of trying in 1999. More recently Wales managed a four-match winning streak in Cardiff from 2016 to 2018, but victory in the 2019 World Cup semi-final, when the two sides last met, was tantalising out of reach for the men in red.

The Autumn Series 2020 carries extra jeopardy as the draw for the 2023 Rugby World Cup in France will be made following its conclusion.
Wales currently lie fifth in the World ranking system, but will be looking to finish the November matches in fourth spot or higher in order to secure a place in Band One of the draw and therefore avoid fellow top four teams when the World Cup pools are established.

The fact that Wales face almost entire top 10 opposition in the coming year means their destiny is in their own hands and meeting the All Blacks and Springboks in November means maximum ranking points will be available if they are needed.

“We will be testing ourselves against four of the best sides in the world this autumn and face the current top two in New Zealand and South Africa,” said Phillips
“To maintain aspirations of winning the World Cup in 2023 we need to continually face the top teams, match them and regularly beat them.
“The stage is set for one of the toughest Autumn Series campaigns ever seen in Cardiff, but I know the whole of Wales will relish the challenge.”

Hospitality and travel packages for the 2020 Autumn Series are available now, for official WRU hospitality please visit  www.wru.wales/hospitality with prices starting at £275 per person to access the “Players’ Lounge” at the Argentina match.

For travel packages please visit the WRU’s official travel partner https://gulliverstravel.co.uk/event/wales-autumn-internationals
Tickets will be available to the public from WRU member clubs at the end of March, when the range of price categories will also be published, with open public sale expected to follow in June for those matches that don’t sell-out.

“As always the best way to get hold of a ticket is from a WRU member club as we can’t guarantee that all matches will reach the open market, so please get in touch with a club near you now to avoid disappointment,” added Phillips.