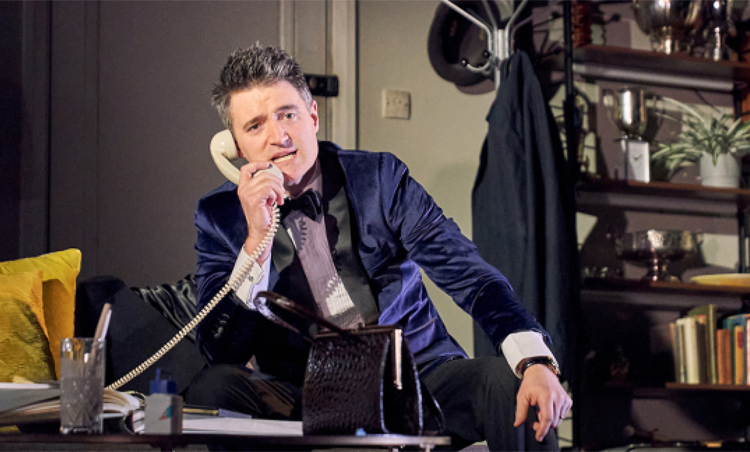 Alfred Hitchcock’s genre defining thriller is brought back to the stage to deliver its classic twists and turns across the UK this autumn. We attended a packed opening night expecting the usual suspense filled thrill ride synonymous with the famous director and we were not disappointed. Starring a few familiar faces on a stylish set transporting the audience back to post-war Britain, we sat back and enjoyed a night of pure-entertaining theatre.

The original story may have been made famous by Hitchcock’s film but Dial M For Murder has always been written for the stage. Debuting on the West End two years before the movie, Frederick Knott’s thriller captured the imagination and intrigue of the British audience, making it an instant success and attracting the starlet Grace Kelly to the role of hapless wife Margot.

Last night we were treated to X-Factor finalist and West End star Diana Vickers as poor unfaithful Margot. She brought her years of experience treading the boards to Cardiff, along with counterpart Tom Chambers former Strictly winner and West End star. They brought life to the superficial couple appearing manic, desperate, and calculating.

We all love a classic whodunnit at the theatre, which this delivers but with a twist. Watching Dial M For Murder is a bit like watching a car crash in slow motion, all the pieces come together slowly to form the ‘perfect murder’ before smashing apart as cocky Tom Chambers gets tangled up in a web of his own making. Its classic cinema told through classic theatre, and it will keep you gasping on the edge of your seat till the final curtain drops. Often the mark of a great mystery thriller is that one key detail that ties all the threads together, something that clicks making you go ‘ahhh’ and last nights show had one of the best ‘ahhh’ moments I think we’ve seen at the New Theatre since it reopened.

Overall, we would seriously recommend catching Dial M For Murder in the act this week. Whether you’re a fan of Hitchcock, thrillers, theatre, or cinema, we know you’ll love this one. I think sometimes the adaptations from screen to stage, and vice versa, can lose a bit of their magic in the transition, but not here. The show delivers all the suspense and dark humour of its beloved counterpart. We are giving this one five out of five thrills. Its pure thrilling and darkly comic theatre. Everything you’d want from a night of mystery and showbiz.