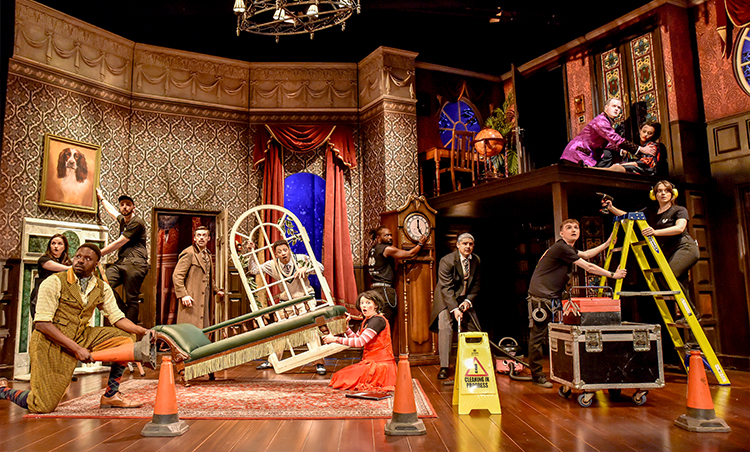 Mischief’s brilliant comedy The Play That Goes Wrong is embarking on its fifth UK tour, stopping at the Wales Millennium Centre.

The Play That Goes Wrong is a classic whodunnit murder mystery with a catch…everything that can go wrong, does go wrong! The cast of the Cornley Drama Society battle through mishaps to put on their show, with hilarious consequences.

The multi award-winning comedy is in its eighth successful (or catastrophic) year at the Duchess Theatre in London’s West End and is once again bringing its unique brand of slapstick humour to theatres across the UK.

Winner of the Olivier Award and WhatsOnStage Award for best new comedy, the renowned and celebrated play was created in 2012 by playwrights Henry Lewis, Jonathan Sayer and Henry Shields of Mischief Theatre Company.

Mischief pride themselves on creating ‘ridiculous escapism’ where people can laugh until they cry. They promise: ‘a world of carefully choregraphed chaos, merry mishaps and timeless comedy.’

Think 1920s farce a la The Mousetrap, but with a self-awareness that lets the audience in on the joke. The Cornley Drama Society’s performance of The Murder at Haversham Manor is complete with disasters aplenty from missed cues to falling props, and actors who are as accident prone as they are forgetful, not to mention unprofessional.

A post-modern take on theatre, the international hit comedy features a capable cast of eight, playing the (not so capable) thespians in this “play within a play”, to laughter inducing effect. Endorsed by a whole host of celebrities, The Play That Goes Wrong is guaranteed to be a shambles, but a funny one at that.

Make sure to catch a performance of The Play That Goes Wrong between 13-18 June 2022.

Get your tickets at: The Play That Goes Wrong | Wales Millennium Centre (wmc.org.uk)