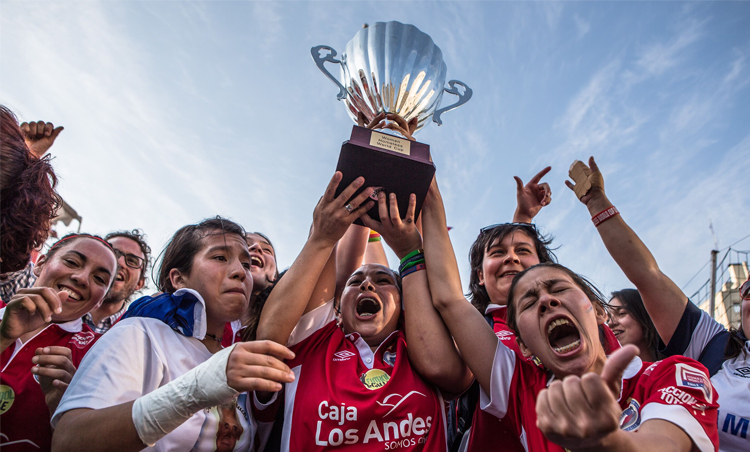 The 17th edition of the Homeless World Cup has arrived in Wales. 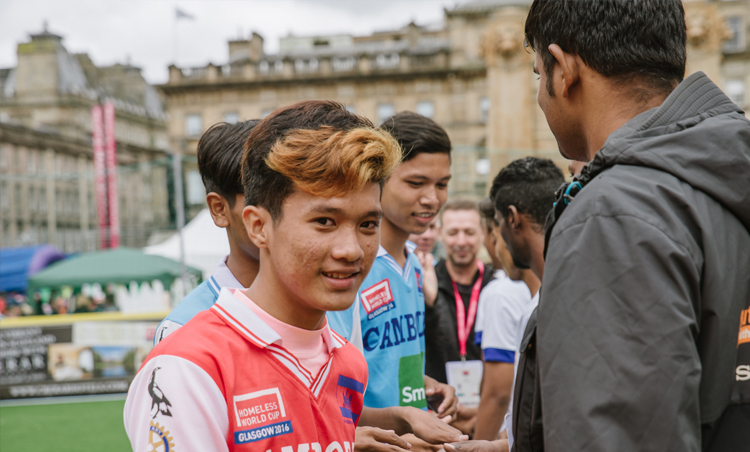 Almost 500 players representing close to 50 countries have travelled to Cardiff to play in the week-long festival of football. Created to harness the power of sport in transforming the lives of people experiencing homelessness and social exclusion, over one million people worldwide have had their lives positively impacted by the tournament and its programmes since the first tournament in Graz, Austria in 2003. Recent hosts of the annual tournament include Mexico City (Mexico), Oslo (Norway), Glasgow (Scotland) and Santiago (Chile).

The Cardiff 2019 Homeless World Cup bid was led by Welsh actor and activist Michael Sheen, who has taken a hands-on role in the organisation of the event. With homelessness at its worst point in decades in the city, across Wales and the UK, the tournament is working to create a legacy which has a real impact on people’s lives long after the final whistle is blown.

Michael Sheen said: “When I attended the Homeless World Cup in Oslo in 2017, I knew we had to bring it to Wales. Making it happen immediately became an ambition of mine, especially as I knew it was already a dream of many within an incredible organisation called Street Football Wales, that I had started working with in 2016.

“And just two years later that dream is very much a reality, and I for one could not be more proud of what an extremely dedicated group of people have managed to achieve in bringing this wonderful tournament to Wales.

“For those of you who are unfamiliar with the Homeless World Cup, and I am imagining that is many of you, I promise you that it is a sporting spectacle that is quite unlike any other. It is of course a football tournament, but it is one that is far more than simply a game. It changes lives for the better. I have seen it happen and it is my fervent hope that this year’s tournament will provide many more opportunities for its transformative effects to be experienced by those who need it most long after the final whistle is blown.”

The Welsh teams are selected through Street Football Wales, who have been behind programmes to aid social inclusion through sport since the inaugural tournament back in 2003.  Keri Harris has managed the team throughout that time, running four leagues with 40+ teams around Wales for people experiencing homelessness and social exclusion.

“This is my seventeenth Homeless World Cup and to experience it here in Wales is something else. I’m literally bursting with pride and our players are so excited to play for their country in front of a home crowd. I mean what could be better? Let’s show them how it’s done Wales!”

The opening day of the tournament

The opening match of the tournament kicks off at 12.30pm on Saturday 27th July and follows a huge Cardiff city centre parade featuring the teams, coaches and staff of all participating nations.

The parade begins at the Principality Stadium (Gate 4) at 11.20am before marching through the city centre streets, accompanied by a marching brass band and a samba band. The procession is scheduled to arrive in Bute Park for 11.50am ahead of an opening ceremony attended by Michael Sheen and Mel Young, co-founder of the Homeless World Cup Foundation.

Here players and the public will be entertained by the likes of Only Boys Aloud, before the Welsh national anthem which heralds the beginning of play at 12.30pm, sung by Welsh singer/songwriter, Shellyann Evans, winner of the BBC singing show, All Together Now.

The opening match of the tournament will be Wales men against Denmark men. This will be followed by Wales women versus Northern Ireland women.

Daily updates thereafter will be available on the Homeless World Cup website and social media channels.

What’s happening off the pitch?

Away from the football pitches a host of big names from the music and entertainment worlds have been announced to perform at the Homeless World Cup.

Hosted in collaboration with the independent think tank The Bevan Foundation, the Bevan Tent will provide a space for high profile speakers and the public to engage in discussion and debate about inequality and injustice.

Fresh from selling out the Royal Albert Hall, Deborah Frances-White’s smash hit podcast The Guilty Feminist will be recording a special live show at the Homeless World Cup on Thursday 1st August with Michael Sheen guesting.  Since launching in 2015 The Guilty Feminist podcast has become a comedy phenomenon with over 50 million downloads. Each episode, Deborah and her guests discuss topics ‘all 21st century feminists agree on’ while confessing their insecurities, hypocrisies and fears that underlie their noble principles.

Previous Guilty Feminist guest, highly acclaimed comedian, writer and actor Sara Pascoe will be performing a Stand Up To Homelessness comedy set on Sunday 28th July.  Sara’s extensive TV credits include the BBC solo stand-up special LadsLadsLads; BBC2’s Frankie Boyle’s New World Order, on which she is a weekly guest contributor; and Comedians Giving Lectures on Dave, which she hosts.

BBC’s Shreds: Murder in the Dock podcast has put the story of the Cardiff Five – five black men from Cardiff’s Docks wrongly convicted of the murder of Lynette White in 1988 – back in the spotlight.  On Tuesday 30th July, Michael Sheen will host an interview with journalist and host of the podcast Ceri Jackson, alongside two of the men who suffered one of the biggest miscarriages of justice in British history, John Actie and Tony Parris, and Kervin Julien, who campaigned for their release.

Further talks will focus on issues including street homelessness, compassion, modern slavery and human trafficking, the story of the Homeless World Cup and whether Wales can really end homelessness.

To complement the football an abundance of family friendly activities will also be on offer, including circus skills workshops, bicycle powered bubble machines, duck races and sporting activities led by Sport Cardiff, including kicking cages, batak reactions and agility games.

The Homeless World Cup Cardiff 2019 is a dry event. No alcohol will be served or allowed on site.

Author It's On Editorial 259
Summer is in the air, and with it comes the smell of fresh popcorn, as Cardiff’s very own starlight screenings return to the rooftop...
Read More