Author It's On Editorial 139 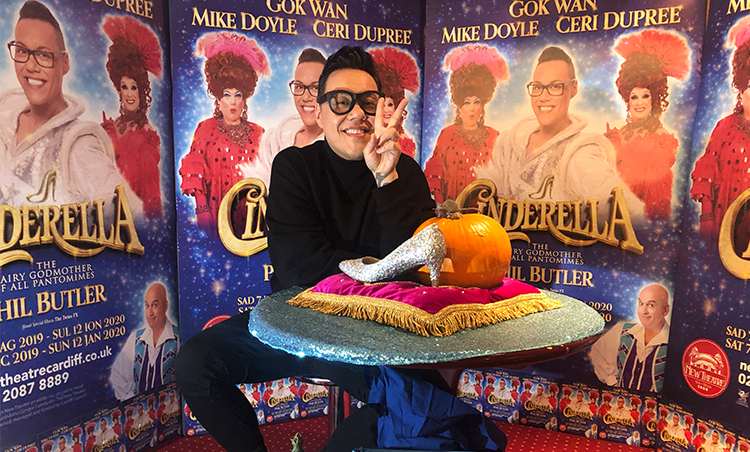 A touch of early Christmas magic came to town as the Fairy Gok-Mother, Gok Wan dropped by to have a chat at the officially launch of Cinderella at the New Theatre  Cardiff

The New Theatre has announced that much-loved television personality, author, style guru, presenter and chef Gok Wan will sashay his way into Cardiff this festive season to star in the most spectacular pantomime of them all, Cinderella. Gok will be joined by panto dame royalty in the form of returning legend Mike Doyle and the hilariously fabulous Ceri Dupree as The Ugly Sisters.

Gok Wan will play The Fairy Gokmother, offering helpful style tips to The Ugly Sisters and creating the most magical ball gown in panto-land for Cinderella! Cinderella marks Gok’s seventh pantomime appearance for producers Qdos Entertainment, the first of which was the subject of the Channel 4 documentary Gok Does Panto.

Gok’s TV career started with the overwhelming success of his Channel 4 series, How To Look Good Naked, which proved so successful that a further six series were filmed, as well as three series of Gok’s Fashion Fix. Gok’s other recent TV credits include How To Cook Chinese, Gok’s Style Secrets, Gok Live Stripping For Summer, Too Fat Too Young and Gok’s Teen’s The Naked Truth. Gok is a regular guest presenter on ITV1’s This Morning and hosted ITV1’s Gok’s Lunchbox.

Back for his seventh consecutive pantomime appearance at the New Theatre, the city’s much-loved Dame Mike Doyle will star as one of Cinderella’s Ugly Sisters. Having appeared alongside the likes of Julian Clary, Lee Mead, Ian H Watkins, David Hasselhoff, Samantha Womack and Lisa Riley in panto, Mike wows audiences every festive season, with his inimitable quick wit, outrageous costumes and audience interaction.

In addition to his pantomime credits, the comedian, singer, actor, radio and television presenter continues to tour the world for six months of the year, in high-demand to work on the world’s biggest and best cruise ships entertaining thousands of holidaymakers from across the globe with his unique blend of all-encompassing entertainment. When he’s not out at sea Mike continues to work across the world of stand-up comedy, radio work and his own concerts backed by the Mike Doyle band.

Alongside him will be cabaret and pantomime sensation Ceri Dupree as his fellow Sister. Ceri has been delighting audiences worldwide for almost 30 years with his unique talents which have taken him through musical theatre, pantomime, summer season, television and cabaret in the UK and across the world, and especially in his native Wales.

Ceri has appeared in many West End nightclubs, he appeared twice nightly, six nights a week (and never missed a show!) for two years at the world-famous Madame JoJo’s in London’s West End. His extensive repertoire of theatre shows include Hello, Dolly!; Rock Hard, a 60s tribute show; Hot Stuff, a 70s tribute show (five seasons and two national tours); The Ultimate Hen Party (season and national tour); The Wizard of Oz (as the most glamorous wicked witch!) and The Rocky Horror Show as Frank-N-Furter.

In addition to performing Ceri has written and produced his own shows including Extraordinaire, Ladies of Legend, Brenda: a Star Is Torn, Eager Divas, The Ceri Dupree Spectacular, Dupree’s a Crowd!, Totally Frocked Up! and Miss-Leading Ladies. His pantomime credits are plentiful and the last few years have seen him appear at the nation’s biggest and best venues alongside the art-form’s biggest names. He was last seen in pantomime at the New Theatre in Sleeping Beauty alongside Joe Pasquale in 2012.

Joining them as Cinderella’s loveable best friend Buttons will be comedian and magician Phil Butler. Phil regularly tours the world with his one man variety productions, entertaining thousands of people every year with his blend of madcap comedy, hilarious impressions and inimitable stage presence. No stranger to pantomime, Phil last starred alongside Craig Revel Horwood in Cinderella at the New Victoria Theatre which broke all Box Office records.

Cardiff audiences shall go to the ball this Christmas as Cinderella transforms from rags to riches, outwits her very Ugly Sisters and with the help of her hilarious friend Buttons and her Fairy Gokmother, wins the heart of the dashing Prince Charming. Cinderella will feature all of the ingredients of the perfect pantomime; a fabulous cast and orchestra, laugh-out-loud comedy, stunning scenery and special effects, beautiful costumes and plenty of boos and hisses for all the family to enjoy. Cinderella will once again be produced by Qdos Entertainment, the world’s biggest pantomime producer and the team behind the annual must-see New Theatre pantomime.

Watch our interview with Gok Wan

Michael Harrison, managing director of Qdos Entertainment’s pantomime division said: “We are absolutely delighted to have Gok, Mike, Ceri and Phil lead our star casting of this year’s pantomime. All four of them are absolute masters of the art form of panto and audiences are in for a treat to see them in action.”

A spokesperson for the New Theatre said “We’re delighted to have secured Gok Wan to lead a stellar cast for Wales’ biggest pantomime, and with Mike, Ceri and Phil joining forces we just can’t wait to see what magic they conjure up on stage.”

The clock is ticking! Don’t miss your chance to see Cinderella, the Fairy Godmother of all pantomimes. Book your tickets to the Ball today!

Europe's largest ice trail will be part of the Cardiff Winter Wonderland this year.