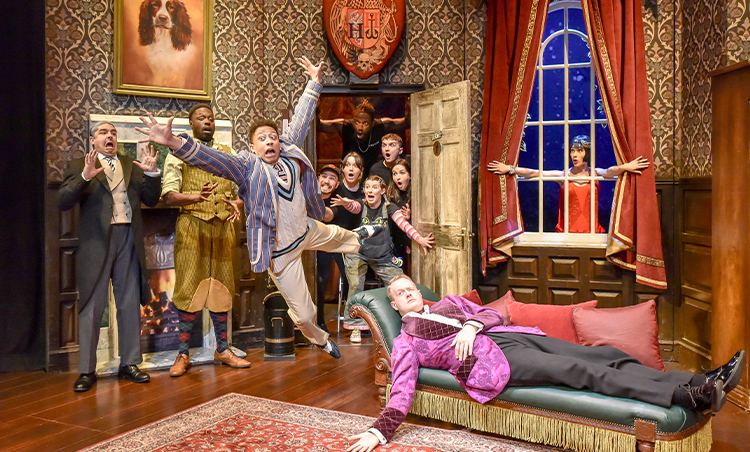 The Play That Goes Wrong gets everything right on opening night!

Don’t panic… it’s supposed to look like this! The show that started the meteoric rise of the Mischief Comedy Company returns in a grand tour of the UK, celebrating 10 years of plunging audiences into fits of hysterical laughter. We went to the shows opening night at the Millennium Centre, and we’ve just about calmed down enough to write this review!

If you haven’t heard of Mischief Comedy, you must have been living under a rock for the last decade. They’ve enjoyed several successful runs in the West End and subsequent UK and global tours with their shows Peter Pan Goes Wrong, Groan Ups, The Comedy About A Bank Robbery and of course The Play That Goes Wrong, winning multiple awards for each. Their success has also lead them to numerous Royal Variety Show appearances and their own TV show on BBC One. Basically, we cannot get enough of them. This time around the infamous Cornley Drama Society are putting on a 1920s murder mystery play, and as you might have guessed… everything goes wrong with hilarious results.

As per usual with shows from this company, the cast is full of Goes Wrong alumni’s, with many appearing in the West End and touring with various Mischief shows around the UK. To pick out favourites in last nights performance would honestly be a disservice to the whole ensemble, as everyone worked so smoothly as a team pulling off ever more elaborate set pieces. The weeks of practice and dedication it must have taken for each joke to land, prop to juggle or stunt to perform absolutely paid off as we couldn’t spot a foot out of place.

If for some bizarre reason, you’ve never heard of any Mischief Comedy shows, then I’ll try to break down some of the things you can expect without giving away any spoilers. Try to imagine an episode of Fawlty Towers, crossed with a dash of Benny Hill, mixed in with a heap of Charlie Chaplin and topped off with a helping of classic Scooby Doo and you’re halfway to picturing The Play That Goes Wrong. It’s a comedy that cannot fail to make you belly laugh no matter what age you are.

Overall, we absolutely loved The Play That Goes Wrong. Full disclosure, we’ve been following the career of this company for years and have seen basically everything they’ve ever done, so it was fairly unlikely we were not going to enjoy it. But just think how great this show must be if in the last 2 years Cardiff has seen 3 productions from the Mischief Comedy company crash through the city, and there are still huge crowds of comedy lovers flocking to the theatre each time to witness the chaos for themselves. Don’t be the one that misses out! Get down the bay while you still can and see the madness live on stage.

Author It's On Editorial 459
“The Adrian Flux British FIM Speedway Grand Prix returns to Cardiff’s Principality Stadium on Saturday July 22 for its 17th year in the Welsh capital and...
Read More