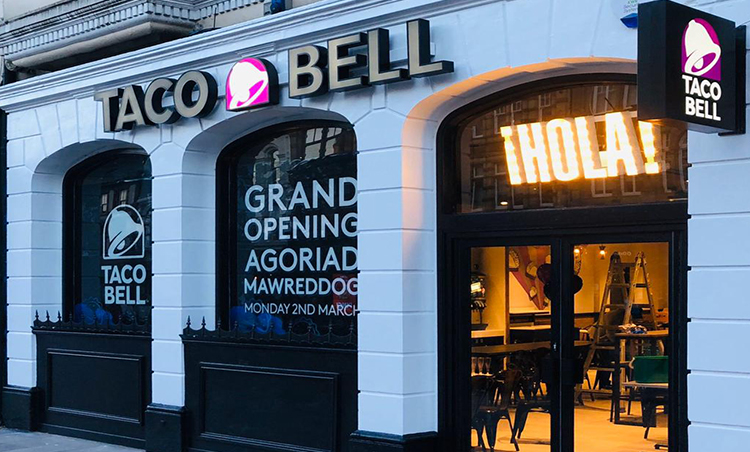 Tex-Mex fast-food sensation Taco Bell lands in Cardiff on Monday! We went along to the launch last week to see what all the fuss was about. It seems that never before has a fast food place generated so much hype before opening its doors in the city centre. So we had to see if it lived up to its reputation.

Being a Taco Bell virgin, I was excited to check out the Mexican inspired chain. It is strange; Taco Bell originally launched in the UK 10 years ago, despite being a staple of the American food industry since 1962. It was designed to break the mould of the US food market, which mainly consisted of hotdogs and burgers. Today, largely due to its slow progression in the UK market, Taco Bell has developed something of a cult following. On the night of the launch, I spoke to a man who, up until this week, makes a monthly trip to the nearest Taco Bell in Southampton because he loves the variety of crunchy tacos so much. If that doesn’t at least make you curious enough to give it a try I don’t know what will.

A big game-changer on the night was the discovery that Taco Bell has an alcohol license! No other fast-food place on St Mary’s Street can boast that. This sets it apart from its competitors and doubles it up as a start and end of the night venue. Most people out in town will finish their night with some quick food for the taxi home, maybe now you can change it up and get some quick food and a beer before hitting the clubs.

In terms of food, I did my best to try as much as possible at the launch so I can give a good overview of the menu (the things I do for you guys ey!). First of all, you should be aware that I have a few allergies which meant I couldn’t give everything a go; however silver linings, the staff were incredibly helpful. So if you’re following gluten, soy, nut or even meat-free diets, then Taco Bell has got you covered. I absolutely devoured any hard-shell tacos I could get my hands on and let me tell you, they’re cracking (pun intended). Sprinkling a bit of fire sauce on them as well just pushed the taste up another notch, or try a milder sauce if you don’t fancy blowing your head off. I also tucked into a mega helping of loaded fries which really did hit the spot. They were heavier than the tacos and very filling, but don’t worry I powered through and washed it down with a margarita.

After breaking my Taco Bell virginity I think I am on my journey to becoming a member of the cult following surrounding this food joint. I honestly think it has carried the original goal through to 2020 of breaking the mould of the fast-food market. If you’re in town in the near future, rushed off your feet, in need of a quick fix before you get your dancing shoes on, then you should definitely give it a go.