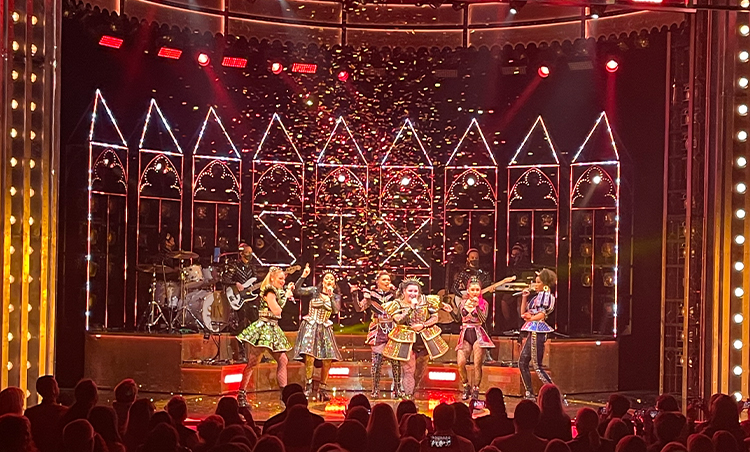 Royal flush- Henry’s queens will have you signing and laughing your head off.

Six the Musical has arrived in Cardiff, giving us all a history lesson like no other. The six queens tell the story of Henry VIII’s wives remixed as a kind of 16th-century version X-wives Factor singing showdown.

We’ve all heard the rhyme, ‘Divorced, beheaded, died, divorced, beheaded, survived’, but we’ve never stopped to think that there are always two sides to every story. In History, Henry VIII’s wives are pushed aside one -by-one with our royal monarch taking central stage; Now, in this award winning performance and explosive remix the queens take the spot light, giving Henry a royal roasting like no other.

Six is not so much a musical, it’s more of a full on pop concert with a point to prove. Each of Henry’s wives get the chance to tell her own version, in what becomes a six-way sing off, battling it out for who was the most scorned spouse to be crowned the lead of the band .

Competition is tight to be the Queen of the castle- would you rather be forgotten, discarded or beheaded? Yes okay, losing your head does kind of take the top spot. But the beauty of this show is the way it presents six genuinely three-dimensional characters, not only with their signature moves and quick put downs, but also with an emotional depth and historical context, which will having you reaching for your golden buzzer each time a queen steps into the light.

The cast in this production are excellent, and as the audience left their seats, the post show natter was full of conversations of who your favourite queen was and every queen does have a fair point. Chloe Hart sets the bar high as a tough and sassy Aragon smashing the vocals, while Jennifer Caldwell brings a Kate Nash dry humour to Boleyn’s character, Don’t Lose Your Head and hilarious one-liners. Casey Al-Shaqsy turns up the feels as Seymour, while Grace Melville is a sassy Cleves, giving zero remorse about her situation. Jaina Brock-Patel’s Katherine Howard is both sexy and miss-understood as she channels her inner Ariana Grande, and Alana M Robinson, as Parr, is the glue to the moralistic revamp, binding the show together with a last minute Jerry Springer final thought, delivered with a stunning vocal.

The standout song of the show for us was undoubtedly the House of Holbein Euro Techno performance with a Diva twist. Imagine Bass Hunter and Nicki Minaj combined into one powerfully funny parody. And whilst we are encouraged NOT to pick a favourite, the dry northern humour and funny one-liners of Anne Boleyn was a clear favourite and easy to see why she has always stood head and …. or just shoulders above the other 5.

SIX The Musical, which runs for a tight 75 minutes with no interval, is primarily a song-driven extravaganza, giving us a unique way to engage with history that might have incited glazed looks from children in the class room. Six has rewritten the queens’ past and is throughly entertaining, hilariously funny, educational and superbly cast.

If you haven’t seen SIX, take your seat and get ready for a modern history lesson like you’ve never had before – with six solos, three group numbers, and, of course, one megamix , it’s up to you to decide who had the worst go of it. That said, no-one is coming to Six for a history lesson and together the Six Queens display stunning harmonies, impressive riffs and tight choreography. They leave us with a positive and fabulously entertaining, feminist take on our country’s misogynistic history.

Six The musical is on at The Wales Millennium Centre until the 14th May.

A night at the museum with a wild twist!