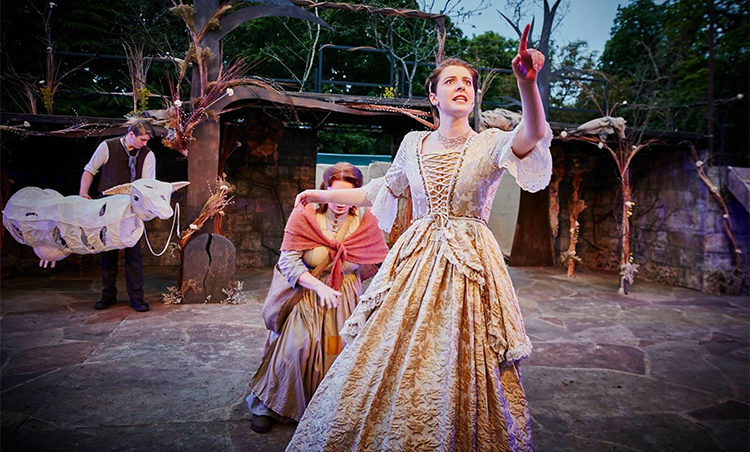 Theatre fans can rejoice as the Cardiff Open Air Theatre Festival is returning to Sophia Gardens after three years away.

If you’re a fan of theatre, you’d better clear your diary this summer. The award-winning Cardiff Open Air Theatre have announced a jam-packed programme to take place at Sophia Gardens between 23rd June and 30th July 2022. The annual outdoor festival is the largest of its kind in Wales and attracts over 14,000 visitors over the six-week period.

Each year their quota includes: a Shakespeare production, a musical, a family show for children of all ages, as well as some light entertainment such as a comedy production. The festival is organised by volunteers from the Everyman Theatre in Cardiff, who are proud to offer a range of productions for all manner of audiences. They describe these offerings as: “innovative interpretations of productions that both challenge and entertain audiences.”

The Everyman Theatre have a longstanding presence in Cardiff’s theatre scene. Founded in 1942, Everyman continued to be influential for local theatre during the 70s and found their home in Chapter Arts Centre, Cardiff where they have their own rehearsal and Clubnight premises. So, who better to curate a festival for theatregoers? Everyman Theatre work with professional directors, designers and technicians to stage these productions, presenting their experimental live theatre in unique ways.

The festival has grown and evolved from its inception in 1983 and provides a wealth of entertainment for theatre fans.

This year’s schedule sees British sitcom royalty Blackadder, Baldrick and co. entertaining the masses in Blackadder Goes Forth. Directed by Simon H West and playing out between 23rd – 25th June, and 27th June – 2nd July at 8pm, with matinees on offer at 3pm on 25th June and 2nd July.

No theatre festival is complete without Shakespeare and 2022’s offering is Twelfth Night under the direction of David Mercatali. Classic theatre at its finest can be enjoyed from 7th – 9th July and 12th – 16th July, as well as matinees on 9th and 16th July.

The musical on the bill this year is the eccentric sci-fi hit Little Shop of Horrors. Rich Turnley is directing the performance and Rob Thorne Jr. is in charge of musical direction. Audiences can enjoy the carnivorous, singing, cursing plant in all its glory between 21st – 23rd July and 25th – 30th July. 3pm showings are also on offer, as well as a BSL performance on 23rd July!

Go Theatre are staging the family production for 2022 with a performance to capture the attention of adults and children alike: Disney’s High School Musical: on stage! This specially adapted version is what you’ve been looking for to have a great summer’s day out. Catch the Disney stage show from 23rd – 30th July at 10:30am and 12:30pm. 24th July and 26th – 29th July performances will take place at 12pm and 2:30pm.

The Cardiff Open Air Theatre Festival also present their ‘In the Park’ programme with Dylan Thomas’ seminal work Under Milk Wood being performed by Everyman Theatre at 8pm, June 26. Everyman Youth Theatre are also getting involved in proceedings with their performance of Shakespeare’s The Comedy of Errors – July 24, 8pm.

Even film lovers can get excited as there will be an outdoor cinema event in partnership with Pride Cymru, where Pride (2014) will be screened at 9pm once the night sky darkens. The festival also supports Welsh Refugee Council as this year’s charity partner.

People of Cardiff (and beyond) can experience open air theatre under the stars with likeminded individuals when the Cardiff Open Air Theatre Festival returns to its home at Sophia Gardens this summer 2022.

For those who are concerned about the Welsh weather, never fear. The 4,000-seat auditorium is under cover for audience members so even if the heaven’s open: The show must go on!

Tickets are available at www.cardiffopenairtheatrefestival.co.uk, or by calling the Box Office on 0333 666 3366.

SIX the musical opens in Cardiff