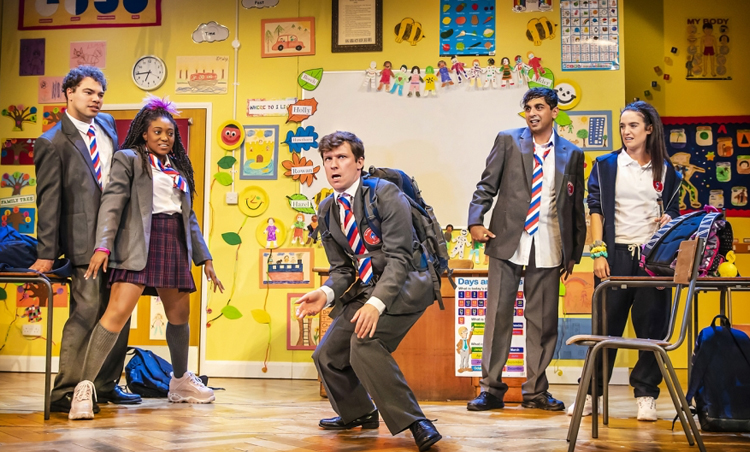 Hit West End shows year on year, multiple Christmas specials, two seasons of a BBC show and probably more awards than all the cast combined could carry. It was always going to be a great night of comedy on the opening night of the new touring Mischief Theatre show, Groan Ups. After having an incredibly success West End run in 2019, the show was due to tour the following year but was delayed and has launched earlier this summer. We were delighted to see Cardiff welcoming the return of Mischief with open arms!

The show delivered on all the usual silly laughs audiences have come to expect from the makers of The Goes Wrong Show, but I think it took many of us by surprise in adding a lot of heart and emotion this time around. The show follows the lives of five friends from nursery to post-twenties school reunion, in a format that differs from the usual meta fourth-wall breaking slapstick of other shows, like Peter Pan Goes Wrong that visited the New Theatre in 2019. It was a welcome change of pace and one that you should absolutely see for yourself if you are a fan of the rest of the companies work.

The set design was spectacular, making the fully grown adult actors look the size of the six-year-olds they were playing. Physical comedy is something the Mischief do best, and the set allowed them to play with the trope of playing children perfectly. The main five on the stage shone, doing an incredible job at playing six-year-olds throwing tantrums and causing chaos, and then awkward anarchic teens fighting to look cool.

This is the first purely comedic show we’ve seen at the New Theatre since the doors reopened and it was a joy to see a room full of grinning faces. We all needed a bit of a laugh after the last two years and Groan Ups dished them out by the barrel load. We saw children of all ages giggling, cackling, and whooping at a range of jokes that can make any belly rumble in fits of laughter. But where Groan Ups really begins to shine is its handling of some sensitive topics and the pains of growing with the insecurities you carry throughout your adult life. The show as a result is heart-warming, heart-breaking and heart-felt all bundled into one.