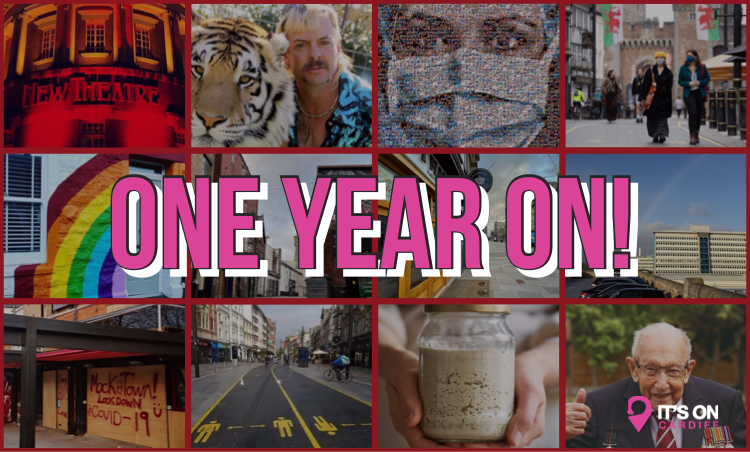 The anniversary that nobody wanted. One year on from the initial lockdown announcement, we want to reflect on a year living with the coronavirus.

For so many of us, the shock of lockdown meant furlough, nights in, too many takeaways and a year long binge of Tiger Kings, Pizza Boys and Queen’s Gambits. We Ate Out to Help Out, had our Christmas hopes dashed at the last minute and we have just seen our first Six Nations with no crowds. At times its was scary, heart-breaking, boring, and game changing… and that is just the latest season of I’m A Celebrity.

But this year has not been a setback for everyone, as we have seen some incredible small businesses established and some old favourites grow. New burger boys Ansh in Canton and One O’clock Gate in Lansdowne have entered the street food scene to rave reviews. We have also seen Wing Stack move to a permanent residence at Lakeside and Blue Honey move from Quay Street to St Mary’s Street and rebrand as The Deep, offering a full vegan menu. This gave the tequila big shots La Pantera the opportunity to expand and over double in size in their first year of business! The North Star reopened under new management and Coffi Co launched a brand-new Gin & Bake experience at Mermaids Quay.

Its incredible to see the Cardiff foodie scene to continue to grow and evolve, despite being one of the worst years on record for social dining experiences! All this without mentioning the true underdogs of this year, The Deck in Penarth. They have endured lockdowns, fire, and storms. They have lost the roof, had the kitchen gutted by fire and they still refuse to quit; serving homemade cocktails and heat at home meals to takeaway… nobody has quite embodied the Keep Calm and Carry On attitude than The Deck this year.

This really is to name just a few small businesses that have not only survived but managed to thrive in these trying times. We have also been so excited to see the news that Dragged2Church is getting its own movie, inspired by the incredible efforts of Cardiff’s drag community and Radio Cardiff’s own Wyburn and Wayne who came together to save the roof of St Andrew’s church in Roath. We are also currently being inspired by Dirty Vegan, Matthew Pritchard, and his team, who are at this moment in the process of rowing across the Atlantic on a 100% plant-based diet.

Nobody could have guessed this time last year that we would still be in the same position twelve months later. Or that the hero of the pandemic could have been a 99-year-old war veteran walking around his garden to raise money for the incredible and never ceasing NHS. But just because we are still in lockdown this March does not mean we are back where we started.

We are getting vaccinated at a rate that Speedy Gonzales would be impressed by, at times hitting an unbelieved 27 jabs a second in the UK. With more than half the adult population receiving their first jab, there is light at the end of the tunnel.

So, although it might feel like Groundhog Day this March, we must remember all the good that has happened in the last 12 months. It has been tough, but we have made it through this far together, and that has been amazing to see. As always if you have a personal experience you would like to share please get in touch. We love to hear how the people of Cardiff continue to prove that this really is one of the best cities on the planet! So, keep your chins up, stay safe, and remember the good times will continue to come back to us slowly but surely.

The Great Insect Games are coming to Cardiff Bay!