Author It's On Editorial 199 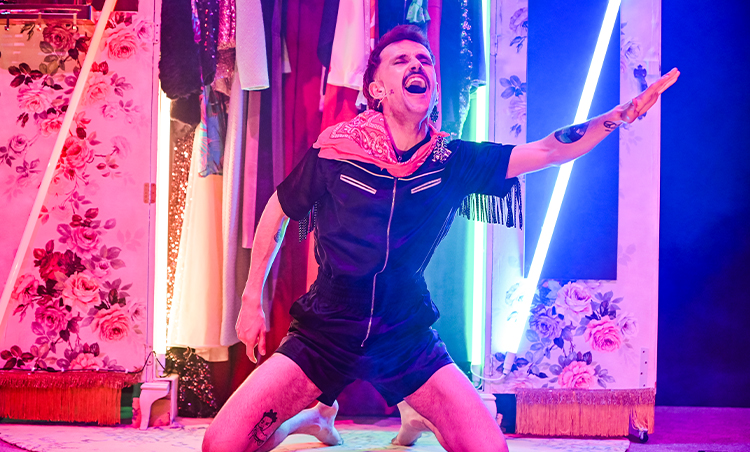 Wales Millennium Centre will co-produce a brand new, solo musical by first-time writer (and long-time theatre-maker) Luke Hereford, Grandmother’s Closet (and What I Found There) is an autobiographical play about queer identities, and how Luke learned to love his with the help of his grandmother and her colourful wardrobe.

There will be two, dementia-friendly matinee performances on Fri 22 and Sat 23 April.

This musical romp down the Yellow Brick Road promises mischief and mashups, dresses and divas, and a whole lot of heart.

Grandmother’s Closet (and What I Found There) is made possible by the generous support of Arts Council of Wales.

Announcing the show, writer and performer Luke Hereford said: “This play is a manifestation of the joyful, glamorous spirit of my grandmother; my ultimate enabler. Every queer person has been on a journey of self-discovery at some point in their life, and though we take most of that journey alone, if we’re lucky we’re guided through it by unexpected formative moments with unexpected personal cheerleaders. Grandmother’s Closet honours those moments and cheerleaders, the power of memory, and is a salute the sacred art of dressing up.”

Wales Millennium Centre Producer Peter Darney said: “This is a beautiful and personal show about Luke’s relationship with his grandmother and the effect her support for him has had on him as an artist. We are very proud to commission Luke’s first production as a writer, and François’ first as a director, combining their considerable talents to make a compassionate and celebratory show.”

Writer and performer Luke Hereford (he/they) trained at Royal Welsh College of Music and Drama. Luke has worked as a director with National Theatre Wales, Tron Glasgow, Lincoln Center Theater, and Sherman Theatre, as a participant of the JMK Directors Programme, funded by the Carne Trust. As Visiting Director for University of Wales Trinity St. David, shows include Growth, Spring Awakening, Every Day a Little Death and A New Brain. As Associate Artist for Leeway Productions, Luke is developing Queerway; a verbatim song cycle celebrating queer life in Wales and was Assistant Director for their acclaimed production of The Last Five Years.

Director François Pandolfo (he/him) trained at East 15 Acting School and has worked extensively as an actor across theatre, television and radio. Television credits includes Quintis in Doctor Who, Tati’s Hotel, Casualty, Doctors, Eastenders and Baker Boys. He was also series regular Roberto in BBC’s The Tuckers, Dread-head in Wasted and Fraser in Big Boys for Channel 4 Comedy. François’ theatre credits include The Taming of the Shrew, The Motherf***er with the Hat and Alice in Wonderland for Sherman Theatre, A Small Family Business, Macbeth and A History of Falling Things for Theatr Clwyd, Lifted by Beauty and Mission Control for National Theatre Wales, Wuthering Heights for Aberystwyth Arts Centre, The Compleat Female Stage Beauty and A Midsummer Night’s Dream for Mappa Mundi, The Magic Flute for Welsh National Opera, Double Vision for Wales Millennium Centre and Bad Girls for Polka Theatre. François is the co-director and partner of difficult|stage. Productions include: A Cold Spread and The World of Work, and critically acclaimed shows Alix in Wundergarten amd Looking Through Glass, both written by François.

Musical Director David George Harrington is a composer, arranger and musical director who has worked and performed professionally for 12 years all over the UK. He has arranged music commercially for clients including Katherine Jenkins, Connie Fisher, Jonny Wilkes, Aled Jones, Shirley Bassey, and has had music performed by the London Philharmonic and London Concert Orchestra, Welsh National Opera, BBC National Orchestra of Wales and Cory Brass Band. He regularly arranges for Decca Records, Warner Music Group and has had music broadcast on ITV, BBC, and BBC Radio 2. David frequently collaborates with leading West End performers and is currently writing two musicals.

Author It's On Editorial 283
Flying Home for Christmas, I can’t wait to see those… Passport queues. Cardiff Airport is preparing to welcome over 37,000 passengers over the Christmas...
Read More