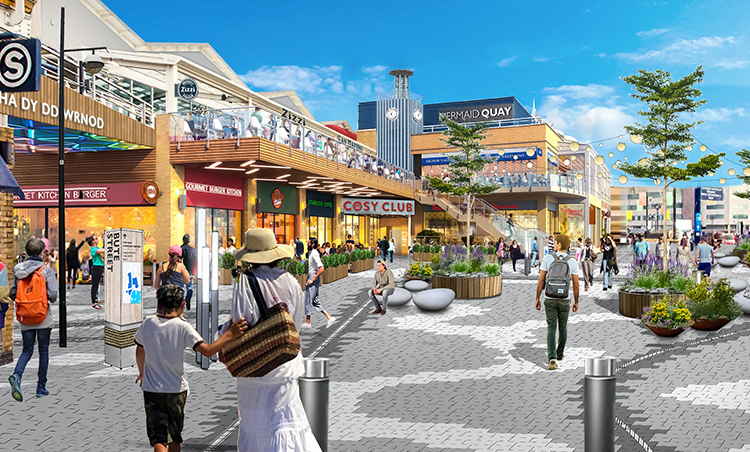 The redevelopment of Mermaid Quay continues with the arrival of the boutique lounge bar Cosy Club. The  popular restaurant and cocktail bar will move into the site previously occupied by Strada on the Cardiff’s Waterfront next summer.

The project has been announced by Schroder UK Real Estate Fund (‘SREF’) after signing a deal to introduce Cosy Club to Mermaid Quay, the popular 150,000 sq ft mixed-use destination on the waterfront in Cardiff Bay, as the fund continues its multi-million pound strategic repositioning of the scheme.

Cosy Clubs offers informal casual dining, drinking and lounging in a family friendly setting. It will be opening its second Cardiff restaurant at Mermaid Quay, taking a 4,435 sq ft restaurant on a 15-year lease. Located alongside a popular mix of F&B brands, it will also have a 500 sq ft outside seating area in Tacoma Square, the scheme’s waterfront promenade.

This letting follows the recent announcement that Everyman will be opening an 11,500 sq ft boutique cinema at Mermaid Quay, its first in Wales, and is in keeping with the repositioning of both the scheme and Cardiff Council’s ambitious vision for the future of the Bay.

SREF’s recently secured consent for a programme of improvement works that will transform the public realm across the scheme. A stylish new landscaped public space is being created in Tacoma Square, where an extensive programme of events and entertainment will take place, as well as a contemporary dockside feel being introduced throughout the scheme. New paving, lighting, landscaping, signage and wayfinding, entrance markers, seating and street furniture will also be installed.

Mermaid Quay is the focal point of Cardiff Bay and is one of the most popular leisure destinations in the city. The scheme, which will mark its twentieth anniversary next year, attracts around 5.5 million visitors a year.

Harry Pickering, Investment Manager for SREF, comments: “Welcoming Cosy Club to Mermaid Quay is testament to SREF’s repositioning of the scheme and the confidence that occupiers have in our vision for the bay-side location. Cosy Club’s enviable position, on Tacoma Square, overlooking the waterfront, is perfectly placed to benefit from the public realm works that are taking place throughout the asset. We look forward to announcing further lettings as more occupiers recognise the potential of this unrivalled location.”

Amber Wood, MD for Cosy Club said: “We’re excited to be opening our second Cosy Club in Cardiff next year. It’s the first city that we have decided to open a second Cosy Club and this is all thanks to our fantastic success at St David’s Centre on the Hayes. Cardiff Bay is a prime location and we’re looking forward to bringing the best of what Cosy Club has to offer to Mermaid Quay.”

30th Anniversary Tour of FAME - THE MUSICAL arrives in Cardiff

Here's where you can drink with the Shelby gang in Cardiff