Author It's On Editorial 359 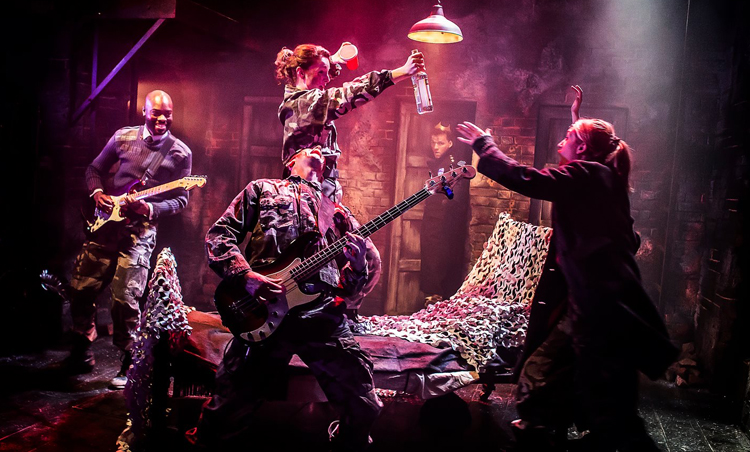 Something wicked this way comes Cardiff… This week we’ve been graced by not one but two classics from The Bard himself. Presented by the Watermill Theatre; A Midsummer Night’s Dream and Macbeth shone and took centre stage. I went along to the latter to get my helping of the ultimate of theatre performances, the cursed play itself! Will I exit the theatre pursued by a bear? Read to the end to find out!

The director, Paul Hart’s modern take on a time old classic raged like a wild fire on a blasted heath tonight. The changes made to the traditional Macbeth formula made the play feel brand new and incredibly engaging to a 21st century audience. The inclusion of music from The XX and alt-J brought a breath of fresh air to the performance; while bangers like Johnny Cash’s Hurt and Paint it Black by The Rolling Stones produced energy and emotion through to the final curtain. The way the songs tied into the story brought so much extra oomph and I absolutely loved seeing the musicians perform on stage as part of the ensemble. If nothing else sells you on this retelling, then trust me it’s worth seeing just to witness a man stage fight while playing the guitar. Everything about the design of this production felt original, from the music to the costumes, which is really saying something about a play first performed in 1606!

The entire ensemble was a joy to watch and was truly engaging. I can’t quite believe they have to perform two separate shows a day, with many of them adopting several major speaking roles. That’s a heck of a lot of Shakespearian to remember. More Thee, Thou, Thy and Thine’s you can shake a stick at that’s for sure. What really blew me away tonight was how sexy they made Shakespeare! Some of that choreography certainly wasn’t on the syllabus back in my GCSE days. The whole cast should be applauded for being brave, bold and empowering. Flipping gender roles and breaking norms all supported by powerful imagery and strong performances, this really is a Shakespeare production for the modern times.

As always though, I have to have my favourites in the cast and I didn’t have to look far to find them tonight. The leads of Lady and titular Macbeth, played by Emma McDonald and Billy Postlethwaite, were superb and their devious chemistry was undeniable. The latter carried himself with the gravitas of an actor many years his senior, and reminded me quite a lot of the old school legends of the silver screen; he commanded the stage and everyone on it. McDonald shone tonight and truly stood out as one to watch for the future. Many of the nation’s most beloved actors started out touring with Shakespeare productions, like David Tennant, Judi Dench, Ian McKellen etc. and it would shock me if in the future Emma’s name was not added to that list. Her performance was not one to be forgotten in a hurry.

Overall, I have to give this one a solid 4.5 bloody daggers out of 5 murdered kings (spoiler alert!); it did old Bill proud and refreshed a stone cold classic in the process. The whole world may be a stage, but you can only catch this game changing performance in the New Theatre until Saturday. Come what may, the naked truth is you don’t want to miss out for goodness sake! (Those were all famous Shakespearian lines by the way… see there is some method in my madness)