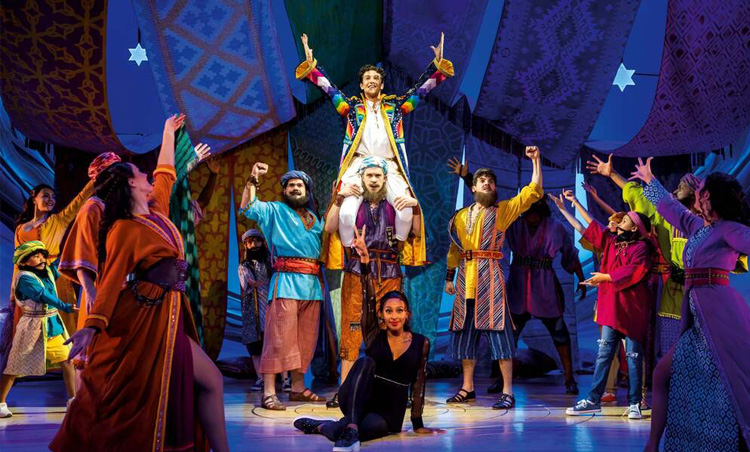 Nobody does a musical quite like the unbeatable Andrew Lloyd Webber do they? Joseph is back in Cardiff to blow dreary grey days away and fill the New Theatre with colour, music, and comedy. You’d be hard pressed to find a show with more flare and fun than this one!

With the triumphant return of the glamorous multi-genre musical to Cardiff comes a star studded cast, an energetic and extensive ensemble and a full spectrum of technicolour costumes and sets. Everything on stage absolutely burst with colour and life as the whole cast danced and sang their hearts out, eagerly encouraged by a full West End worthy band that nearly brought the roof down with each song! With five decades of touring history, its easy to see why the musical has been such a hit across generations of theatre goers. Music by Lloyd Webber and Time Rice lyrics is always a formidable combo, but in Joseph the duo of the theatre legends reach new heights, as the show bursts with more hit songs than you can count. From Close Every Door to Any Dream Will Do, you’ll be leaping out of your seat to join along with the dancing on stage before you know it.

One of the big names of the show, and no stranger to West End tours, Alexandra Burke proved once again that she has some of the greatest vocals on the musical scene. She delivered belter after belter and spot on comedic timing rarely seen in a musical production. Perhaps even more impressive, she is currently seven months pregnant and can still gracefully pull off dance moves that most wouldn’t even attempt on stage. Now that’s girl power! In the lead role, Jac Yarrow did his city proud. The Cardiff local was bursting full of energy and musical talent, shining nearly as bright as his amazing wavy garms. But absolutely stealing the show right up until the final curtain, the younger members of the cast blew the whole audience away. Throwing out backflips, flawless dance moves, pitch perfect high notes and well placed quips the children in the cast stole the hearts of everyone in the theatre. I think Cardiff may have just witnessed the birth of a new generation of West End stars!

The costumes and dance routines were something else, bursting with colour and often switching musical genres from French laments to Vegas show tunes. Just when you thought the show peaked, the cast pulled another complex and spellbinding routine out the bag. The set design was equally of the highest calibre, utilised to its fullest potential to transport the audience to ancient Egypt. This may have been the best example yet of a show looking like a pop up picture book brought to life, controlled by the Alexandra Burke’s narrator.

Overall, Joseph and The Amazing Technicolour Dreamcoat has large shoes to fill, after such a rich history of global performances, and it did so with ease. With a crash of drums and a flash of light, Joseph burst onto the stage tonight. If you love a classic feel good musical, then this is the one for you. Don’t miss out!

This is Why 100's of Tulips Were Left at Cardiff Bay