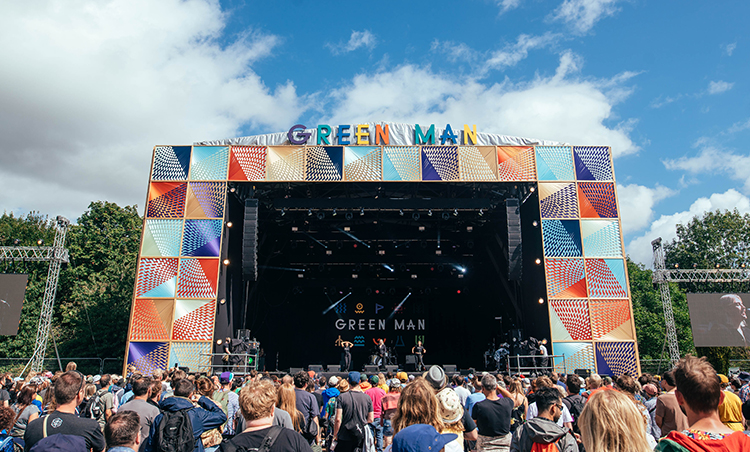 Wales’ largest music festival, Green Man, is delighted to today announce the first details of this year’s festival, returning once again in the epic surroundings of the Black Mountains deep in the heart of the Brecon Beacons for its 18th year.

Tickets are on general sale now, with early bird tickets have sold out in record time. For those looking for the full Green Man experience, the Settler’s Pass is available, which turns the festival into a week-long holiday, allowing early access to the site from 17th August, and includes workshops, music, discounts on local heritage sites, galleries, castles and more.

The magic of Green Man lies not just in its scenery and music. Made up of 10 individual areas, the festival also offers a diverse range of events to accompany its incredible line-up, boasting art installations spread throughout the tranquil valley, a beer and cider tent to enjoy a crisp Welsh pint, a prehistoric themed area of discovery and exploration for the ‘little folk’ and a relaxation and workshop space for the teenagers. All of that, as well as a line up of science, film, comedy, wellness and literature that will be revealed in the coming months.

Almost ten years on since his Green Man debut, Michael Kiwanuka returns to the Brecon Beacons following the release of his acclaimed third studio album KIWANUKA last year. Elevated by his expansive new material alongside older favourites, his fourth appearance at the festival will this time be as a worthy and mesmerising headliner.

#GreenMan20 has landed! ⚡️ @michaelkiwanuka, Mac DeMarco (his only UK show), @caribouband, @LittleDragon are headlining in the mountains & a whole host of bewitching acts! Bag a ticket > https://t.co/0uGLXrJK3q pic.twitter.com/zitO88WnpP

Green Man are also thrilled to welcome back one of the biggest names in electronic music Caribou, whose first new music since 2015’s Our Love, which became synonymous with memories of sun-soaked festival fields, has been warmly received. The sights and sounds of Caribou’s dreamy electronica echoing among the Black Mountains is sure to be a highlight and a special moment of his shapeshifting 20 year career.

Talking about the festival, Dan Snaith aka Caribou says “There’s a kind of magic about Green Man – both that I’ve experienced myself in the past and that I hear about from friends who go every year. I feel very lucky that we’re going to headline this year – it’s one of this year’s shows that I’m most excited about. Hopefully we can bring along a bit of magic of our own.”

Welsh musicians joining the line-up this year include Super Furry Animals frontman and solo artist Gruff Rhys who released his album Pang! last year. Dubbed a minor masterpiece by The Guardian, Pang! was produced by South African electronica artist Muzi. This and Rhys’ extensive and ever popular back catalogue is bound to be a crowd pleaser in the Beacons.

Cardiff band Boy Azooga returns to Green Man following their debut at the festival in 2017. After an amazing year where the four-piece has supported Liam Gallagher, as well as the aforementioned Gruff Rhys, Boy Azooga will adorn the Black Mountains with their mix of indie rock tunes from their album 1, 2, Kung Fu.

Dubbed a psychedelic, vintage-country pop band with a surf twang fresh out of the box for 2019, Melin Melyn are made up of North Walians and Cardiffians. Their recent single Mwydryn was met with praise from all quarters, with Boy Azooga championing them as a band to watch for their upbeat bilingual melodies.

Always certain to put on an entertaining show, Mac DeMarco is set to bring his trademark slacker indie-rock to this year’s Green Man. Known as the ‘loveable prince of indie-rock’, this summer he will undoubtedly play an unforgettable set on Green Man’s iconic Mountain Stage.

Chatting about his return to the festival, Mac DeMarco says “Wales, we’re coming again, very stoked, should be a good time all over again, seeya soon, ciao Bella”

Electronic duo Goldfrapp will continue the celebrations of the 20th anniversary of their seminal album Felt Mountain at Green Man this year with an undoubtedly stellar performance with seven albums; an Ivor Novello award; and Mercury Prize, Grammy and Brit Award nominations all under their belt.

Joining us for her first appearance at Green Man will be three-time Grammy Award-winning American alt-country singer Lucinda Williams, adored for her legendary perfectionism and rich poetic detail. Multi-instrumentalist and pioneer of the 2000’s Californian psych-infused garage rock scene Ty Segall is sure to also bring an emphatic performance with a wealth of material to draw from, having released 12 albums in 12 years.

Due to share her fourth studio album Mytopia next month, Danish singer-songwriter Agnes Obel will no doubt bring a taste of her new music, alongside her platinum-selling atmospheric chamber-pop records to her Green Man debut this summer. Still bathing in the glowing reception from both fans and critics alike for 2018’s Wide Awake, Parquet Courts will bring their danceable, immediate and uncompromising energy to Green Man for the first time since 2013.

Following the release of the adventurous and acclaimed House of Sugar last year, (Sandy) Alex G’s performance will be one of the most anticipated and intimate of the weekend. Also appearing at this year’s Green Man will be LUMP, the collaborative project between Laura Marling and Tunng’s Mike Lindsay which resulted in their hypnotic self titled record.

Shame has made a name for themselves as one of the buzziest bands of recent years for their unflinching post-punk, with their debut album Songs of Praise proving their calibre beyond the hype. Another band spearheading a new wave of guitar bands is the incomparable Black Midi, who after much mystery recently released their experimental Mercury Prize-nominated debut album Schlagenheim.

Some of Green Man’s most unforgettable performances over the past few years have come from the jazz artists who are currently making huge waves in the mainstream, and this year should be no different. Soul shaking afrobeat eight-piece KOKOROKO and London collective Steam Down, born out of weekly jam sessions and now renowned for their furiously energetic sets, are today announced to play at Green Man ‘20.

Elsewhere, Sudan Archives, The Murder Capital, Richard Dawson, TORRES, The Orielles, Charlotte Adigery, Sinead O’Brien, Do Nothing and many other exciting artists join the bill, with plenty more names across all stages to be announced over the coming months.

The full first line-up announcement is as follows:

How much will tickets cost?

The new Cardiff restaurants and bars to enjoy Summer 2022