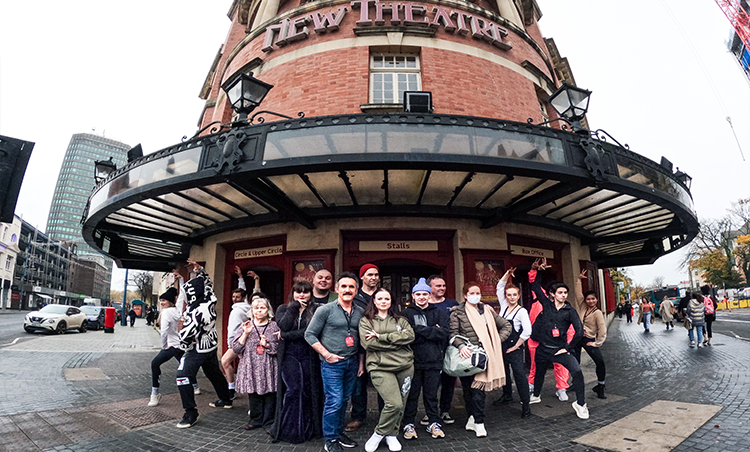 Everyone’s favourite family of oddballs has just rolled into town, welcomed by a manic mob of theatre goers demanding some dark comic entertainment. The gang’s all here; Gomez, Morticia, Wednesday, Pugsley, Fester and more return to haunt Central Park and a grown-up Wednesday’s new boyfriend. It has all the makings of a graveyard smash-hit, but can it live up to the hype?

Opening many years after the beloved film and series, the musical shows the family in turmoil as Wednesday has grown up and wants to marry… a normal boy! The shock, the horror and the hilarious antics that follow are everything we know and love from a classic Addams Family caper. Kingsley Morton absolutely belts out a couple of the show’s biggest tunes, including ‘Pulled’, an instant modern musical classic.

Balancing horror with comedy can be a tightrope act, but Scott Paige as Uncle Fester managed it with ease, perhaps as more of a side character than we are used to after Christopher Lloyds tenure but still a joy to see on stage. A surprisingly large presence for a character communicating in grunts and groans, Dickon Gough’s Lurch was also a highlight, displaying a masterclass in physical comedy.

But for us, the absolute show stealer was Joanne Clifton. For a woman who has recently revealed an osteoarthritis diagnosis, Joanne danced and moved as if she was back in 2016 winning Strictly Come Dancing all over again. Her grace and fluidity were every embodiment of the ghoulish goddess Morticia Addams, stealing every scene she was in and gliding around the stage in some of the best dance numbers we’ve seen in recent years at the New Theatre. If anyone nailed the brief for Addams Family member to a tee, it was the spooky, sexy, and hilarious Joanne Clifton.

So, the actors were world class, the songs were catchy, and the comedy landed. Only thing left to mention is the unbelievable set design that transformed our beloved New Theatre into the huge and imposing Addams family home. The set designer Diego Pitarch should be commended for bringing organised chaos to the stage, with huge moving parts and nice little touches like moving pictures and epic Game of Thrones style sword arrangements. The most impressive set we’ve seen on tour from the West End!

But the real burning question is does it capture the same tongue-in-cheek charm of the films? Yes… Yes, it does. It has all the laughs, chills, and gravitas of the oddball family we’ve grown up loving. The cast did their characters more than justice and elevated them to new heights, bringing them to fans of all ages! We saw audience members from all eras of Addams; the black and white TV show, the 90’s Hollywood movies and the new animated kid’s classics. Watching fans of all eras brought together laughing at the same silly jokes and marvelling at the same musical numbers was a joy to watch. We give the ghoulish gang, five lumbering butlers out of five. No matter which era of Addams you love, you’re guaranteed to adore them on stage.