Author It's On Editorial 169 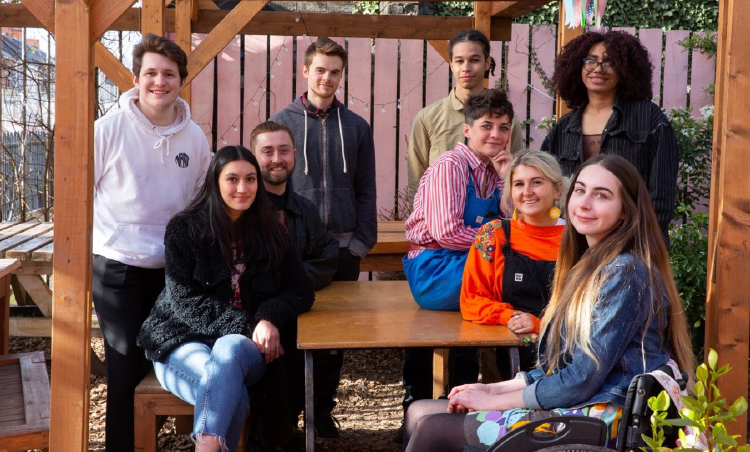 Introducing the twelve individuals who will work behind the scenes on the pan-Wales arts project GALWAD: A STORY FROM OUR FUTURE

Twelve extraordinary young people from across Wales have been selected to form GALWAD’s Young Company, collaborating with the GALWAD team to develop and deliver GALWAD: A STORY FROM OUR FUTURE – commissioned as part of UNBOXED: Creativity in the UK.

GALWAD: A STORY FROM OUR FUTURE will see Wales’ boldest talents across arts, screen, broadcast, and digital sectors create a multi-platform story with participants across Wales to unfold in real-time over a week at the end of September 2022 – exploring a possible future in 30 years’ time.

A creative and ambitions act of collective imagination from and by Wales, GALWAD is inspired by the Well-being of Future Generations (Wales) Act 2015 and will invite audiences to explore the moral dilemmas and possibilities of a different kind of future.

Embedding young voices in the making of a major cultural project

GALWAD’s Young Company is made up of twelve individuals with different interests, skills, outlooks, aspirations and lived experience. The group includes poets and writers; creative industries students and graduates; artists and musicians; young people with a passion for the environment and social issues and several Welsh speakers, forming an exciting and diverse new network representing different voices from across all of Wales. Voices that will be crucial in helping influence, shape and communicate the GALWAD story.

GALWAD has devised a programme where Young Company members will co-create their own personal creative journeys across all areas of the project – including the arts, creative technology, film and screen-based media, journalism, and environmental and climate science.

They will also receive tailor-made support, training, and mentoring enabling them to get the most out of their bespoke learning experiences. The Young Company will meet over a series of six co-designed residencies to explore and understand the creative processes and people behind GALWAD, to meet with partner organisations, build a professional network across Wales and develop their own creative practice and leadership skills.

The youngest member of Young Company is eighteen-year-old A-level student Rha Arayal from Swansea. Rha is a British Nepali writer who published her debut poetry collection with Gen Z Publishing last summer. Rha enjoys writing about social issues such as racism, global warming, and the effects of the pandemic.

The oldest member is twenty-six-year-old Deane Bean, (25 at the time of applying), also from Swansea. Deane is a graduate of Fashion and Visual Communication who has been working in social care and retail, and who is hoping to reignite his arts and creative career through his involvement in Young Company.

Beth Handley, twenty-two, from Monmouth is currently studying for a degree in Journalism, Media, and English Literature at Cardiff University. She’s an internationally published poet and a writer with Sherman Theatre’s Unheard Voices scheme. As a young Disabled woman, Beth is passionate about promoting the voices of other young Disabled people.

Gwyn Daggett, twenty-two, from Brecon is currently studying Coppicing and Greenwood trades at the Black Mountains College near Talgarth. Gwyn is a guitarist and songwriter with a great enthusiasm for physical outside work such as tree surgery, hedge laying and dry-stone walling. He enjoys exploring mountains and swimming in rivers and lakes.

Alex Stallard, twenty-five, from Cardiff is a recent marketing graduate. Alex comes from a rich multicultural background with familial roots in the South Wales valleys. He was raised by Deaf parents and has sign language skills. Alex is passionate about music, sport, the environment, and the positive, impactful change these avenues can bring.

Buddug Roberts a twenty-one-year-old writer from Tregarth in North Wales, currently studying for a Masters’ degree in Creative Writing at Bangor University. Buddug is passionate about using Wales’ rich cultural heritage and its language to serve the country better in the future.

Laurie Thomas, nineteen is a film student from Carmarthen. Having had a childhood surrounded by passionate Welsh culture and mythology, she has a deeply ingrained passion towards storytelling and how identity can be communicated through the tales we tell.

Film graduate Barney Andrews is twenty-four and from Trawsfynydd, North Wales. He currently works as a projectionist at Cell B in Blaenau Ffestiniog – one of GALWAD’s community partners, which is how he found out he found out about Young Company.

Nineteen-year-old Shakira Morka is originally from Swansea but currently studying Psychology at Bristol University. With lived experience of multiple intersecting under-represented identities, Shakira has a unique perspective on social issues and values and is interested in expressing these ideas through writing and arts.

Two young people who are originally not from Wales but have made Wales their home are included in the GALWAD Young Company.

Twenty-five-year-old Anna Amalia Coviello, originally from Italy, is a Cardiff-based community artist and therapeutic arts practitioner who hopes to spread awareness of the healing power of the arts and support people in exploring their creative potential via her cycle powered community arts space ‘Well Wagon’.

Paul Kaiba, twenty-five, originally from Austria, is a Wales-based theatre practitioner and scenographer, currently living and working in South and West Wales. Paul studied performing arts & scenography, as well as stage management and technical theatre at Aberystwyth University and the Royal Welsh College of Music and Drama. His work revolves around researching and exploring socio-political issue through theatrical means.

GALWAD worked with a team of young people to co-design an accessible, open, informal, and inclusive selection process. This process placed GALWAD’s core value of radical inclusion at its heart and was centred around conversations and not criteria. This resulted in a broad range of young people putting themselves forward for the opportunity.

In addition to the twelve Young Company placements GALWAD has made a commitment to continue a conversation with all the young people who have reached out to us. GALWAD will

work together with each young person to find a creative engagement opportunity ensuring that the project benefits as many young people as possible.

Creative Director of GALWAD, Claire Doherty, said: “Wales has an exceptional track record of ground-breaking work with young people – from Ethnic Minorities & Youth Support Team Wales (EYST) to the Future Generations Leadership Academy, from Omidaze’s Democracy Box to the work of the freelancers and organisations at the heart of the Youth Arts Network Cymru (YANC).

“GALWAD is building on these networks and practices to embed a pan-Wales network into the heart of the creation of a significant cultural project. How could you imagine a story of our future without young people at its heart?”

What to Say to a Grieving Friend

The Blood Moon is coming back and it could be the end of the world!

US military teams up with Silicon Valley to revolutionize the battlefield