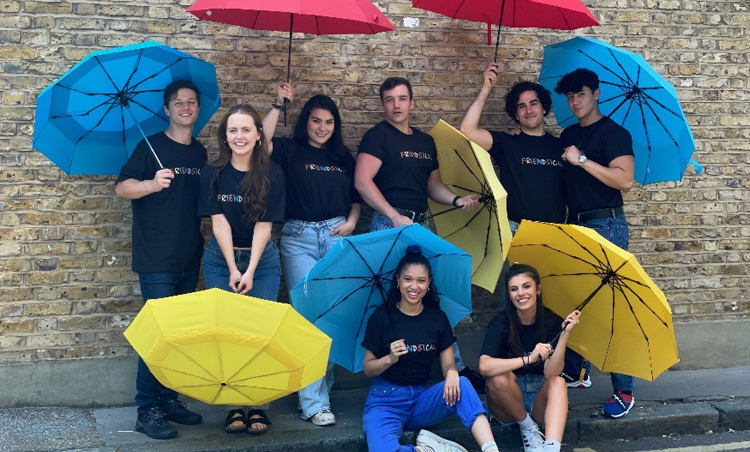 The comedy musical Friendsical, written and directed by Miranda Larson [Christmasaurus, The Night Pirates, Cartoon Network Live], has been revamped and will have its run at Cardiff’s New Theatre from 8 – 10 September 2022 and then will embark on the rest of its UK-wide tour.

Friendsical is an original, unique parody musical inspired by the hugely popular and beloved US TV show Friends.

Ross, Rachel, Joey, Monica, Chandler and Phoebe have been with us for nearly 30 years. They are still there for us, and this time a stage show musical parody crams all 10 seasons and 236 episodes into 60 minutes of nostalgic fun.

Join all six friends as they sit around the iconic brown couch in Central Perk and take a trip down memory lane, with all the very best inside jokes, unforgettable scenes and storylines included.

When Ross’ wife leaves him for another woman, he fears he will never find love again. But then Rachel runs back into his life… will he end up with his one true love?

Featuring original songs such as ‘(He’s her) Lobster!’, ‘Richard’s Moustache’ and ‘You’re Over Me? When Were You Under Me?’, the gang take on naked Thursdays, a power cut, and a dinosaur convention.

What could possibly go wrong?

Writer-director Miranda Larson says, “From day one of airing, I have been a huge fan of the TV Show, and it has been a dream to stage and celebrate this iconic series. There is something for everyone in Friendsical, from the well-known references to ones that only mega fans (like me) will get. Oh and if you are new to “Friends”, then it’s a fun musical love story that can be easily followed!”

With book and lyrics by Miranda Larson and music by Barrie Bignold, Friendsical is choreographed by Darren Carnall and associate choreographer Michael Vinsen. The set and costume is designed by Anthony Lamble with lighting design by Dominic Jeffrey and sound design by Olly Steel. Casting is by Nicholas Hockaday and it is produced by Nick Brooke, William Burdett Coutts, Philip Noel and Dave Mauchline.

Friendsical is produced by Brooke Mauchline Productions Ltd in association with Assembly Festival.

The Ivy Asia is set to open in Cardiff this summer

The new Cardiff restaurants and bars to enjoy Summer 2022

Review : School of Rock the musical