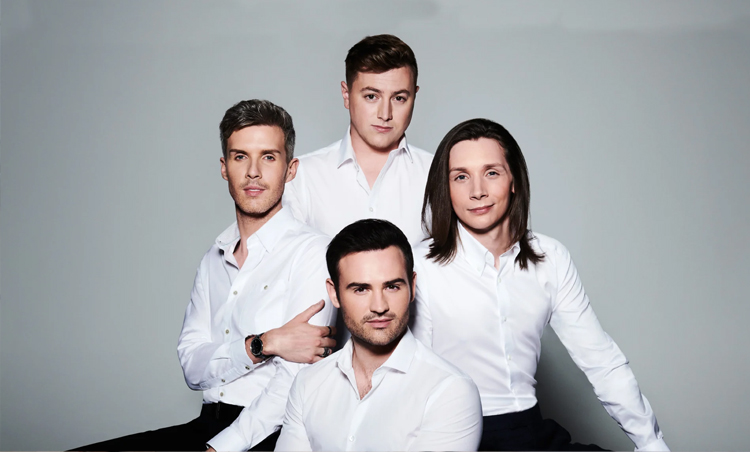 We spoke with Matt Pagan on the upcoming tour

Winners of the eighth series of Britain’s Got Talent in 2014, UK-based musical theatre group Collabro have gone on to have four sellout UK tours, two US tours and six albums under their belt.

The group hit number one in the UK charts with their first album ‘Stars’ in 2014, landing Collabro the tagline of world’s most successful musical theatre group. Collabro’s most recent debut album, ‘Love Like This’ released in October 2020 was set to be a UK tour before the pandemic.

We caught up with Matt Pagan, one fourth of Collabro, and got an insight into life on tour, the rescheduling of their 2020 tour ‘Love Like This,’ and what the group are most looking forward to on the re-branded ‘Greatest Hits’ tour starting in October 2021.

Matt said, “It’s been so long since we’ve been able to go on stage and perform the songs that the fans love, and this is the first time that we’re going to be able to do like a full show, and it’s got to be the biggest and best songs that we’ve ever done.”

Over lockdown, Collabro took to social media to give back to their devastated fans following the cancelling and further rescheduling of their 2020 tour; the group put out a poll on social media asking fans what songs they’d like to hear on their ‘Greatest Hits’ tour, as a thank you for their patience over the Covid-19 pandemic.

“We’ve put together a setlist from the songs the fans chose and it’s just amazing, and we’re very excited to be going back on stage!” said Matt.

The boys have included two Welsh dates on the tour, the first in Llandudno on the 10 of October 2021 and the second in the city, playing at Cardiff St David’s Hall on the 14 of October 2021.

Matt said, “Every time we come to Wales, it’s amazing! We’ve done so many shows in Wales, the audiences have just been absolutely incredible! So, we always love coming to Wales.”

St David’s Hall in the city centre is one of Matt’s favourite venues to play because of the private piano in the artist’s dressing room.

He said, “We always have such a laugh, we make up songs on the piano and make that part of our warmup. It is such a great location, and we absolutely love it!”

Matt said his friends and family will certainly be travelling down to see the Welsh show in Cardiff, even if the group are restricted from saying hello and hugging their loved ones due to Covid-19 precautions.

Spending twenty-four seven together as a four-piece group has its challenges, Matt said the group prioritise taking care of one another and giving one another space, more so after the challenging lockdown.

“It can be quite tricky [being on tour], but the one thing that we’ve learned over the last seven years is to be patient with each other. We’ve created this bond, it’s really special, and we know immediately if someone’s not feeling right or if someone’s a little bit down, so we’re going to be more vigilant of that,” said Matt.

Excited to get back on stage and in front of a live audience, Matt said, “We haven’t seen a lot of the fans for up to two years now, so it’s really important that we kind of put a smile back on everyone’s faces!”

Collabro have been creating videos on TikTok to expand to a younger audience.

Matt said, “TikTok is something fun for us to do when we’re on the tour; engaging a younger audience was our plan to start with, when we first put the band together! We’re wanting to bring musical theatre to the forefront and put it into the mainstream media, so if we can do that on TikTok, that would be incredible!”

Check out some of their videos via @officialcollabro

STORMZY confirms rescheduled Cardiff date - how to get tickets

Author It's On Editorial 322
Anthony Joshua MBE will defend his World Heavyweight titles against Kubrat Pulev at Principality Stadium in Cardiff on October 28, live on Sky Sports...
Read More