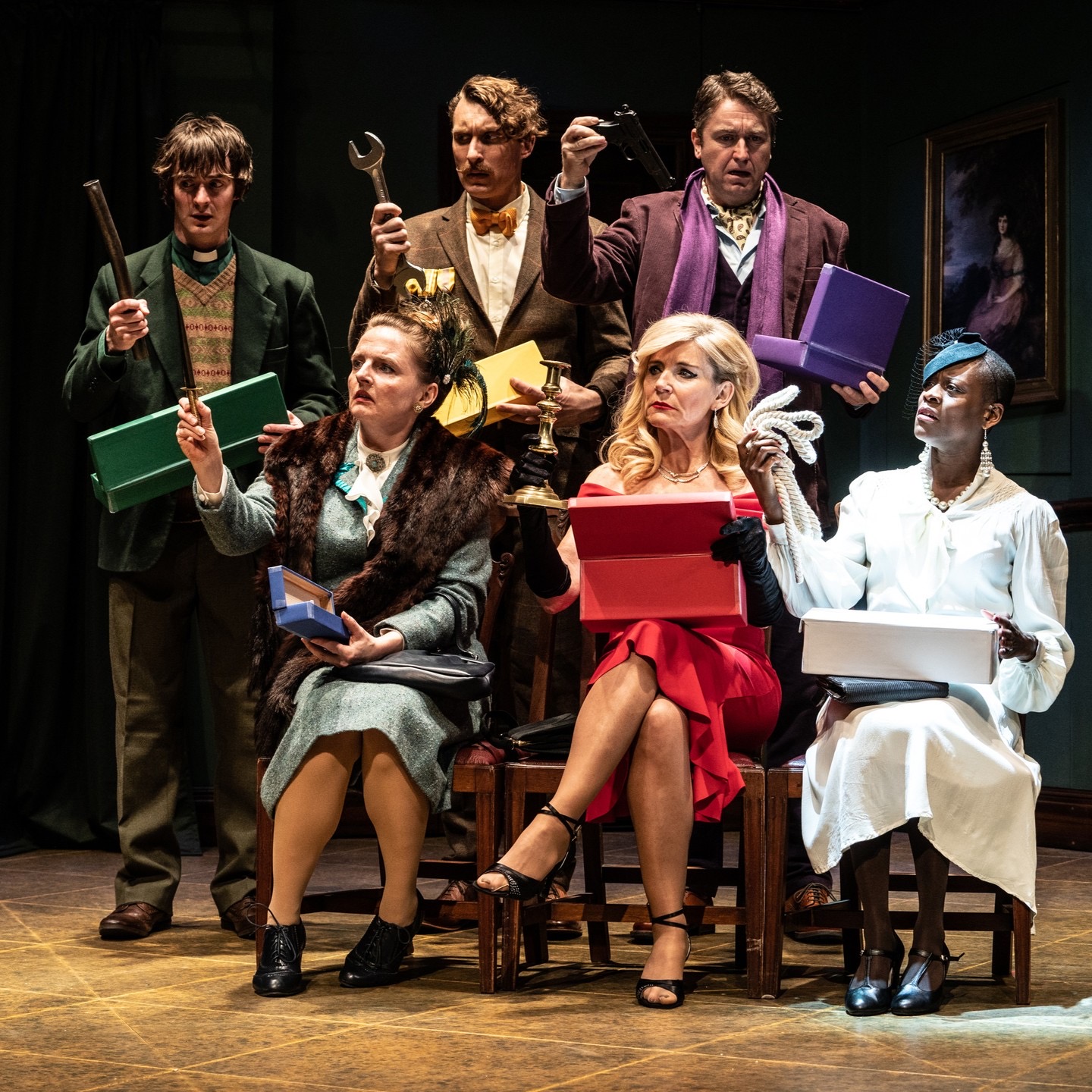 In the words of the Director, this is a new British play based on an American play, based on an American film, based on a British boardgame. Cluedo is jumping off the board and onto the stage and it will have you scratching your head and belly laughing until the final curtain. Twists and turns and gags aplenty only one thing is for certain… it will be on stage, with a colourful cast of characters, in the New Theatre for one week only!

This brand-new version of Cluedo The Stage Play has been updated for a UK audience by the man behind the astronomically popular, The Play That Goes Wrong. Mark Bell has worked hard to ‘Britishise’ the American script, bringing back the classic Agatha Christie vibe of several strangers (who may not be strangers at all), trapped in a manor house in the English Countryside. Once the classic Whodunnit had revealed itself, Bell has also spent time engraining much of his famous slap-stick comedy for which he is so well known. The whole play feels just like the other Mischief Comedy with some perfectly timed physical comedy and maniacal energy from the characters. For a good visual representation of this, think of a murder mystery set in Fawlty Towers and your halfway there.

The whole cast were superb, and each brought their own unique style to the collection of characters. Michelle Collins was an excellent, sultry, and sassy Miss Scarlett, spicing up the stage and keeping the others on their toes. Wesley Griffith was also brilliant as a twist on the Colonel Mustard character, making him a bumbling simpleton rather than a stern army vet, delivering some of the most unexpectedly funny lines of the show. But, in my opinion stealing the show, Jean-Luke Worrell brought something special on opening night providing enough energy to power the lights in the New Theatre. The hyper physically comedy he brought to the role was so surreal and perfectly placed in this manic play and his character tied the whole show together beautifully.

Initially I thought this would be a one room play, as all the characters arrive in the hallway and greeted with an array of doors, but I could not be more wrong. The set design was ingenious, resembling a huge pop-out book as the walls fold open to reveal each of the rooms housed in the famous game. This was utilised thoroughly bringing about some of the biggest laughs of the whole show. At times resembling an old Hannah Barbara Scooby Doo cartoon as the characters zipped between the doors chasing, or being chased, by the killer. I should have known that the director of The Play That Goes Wrong would not let an inch of the stage go to waste and will not be underestimating him again!

Overall, Cluedo was a fun and imaginative telling of a classic British boardgame come to life! I would recommend it to anyone who is a fan of Whodunnits, slapstick comedy or just theatre in general. It was an absolute delight to watch. We give this one four and half stars out of five. If you have time, you should absolutely dust off your armchair detective gear and get yourself to the New Theatre this week. Just be sure to keep your eyes out for Miss Scarlett in theatre with the candlestick, you do not want to be the next victim!