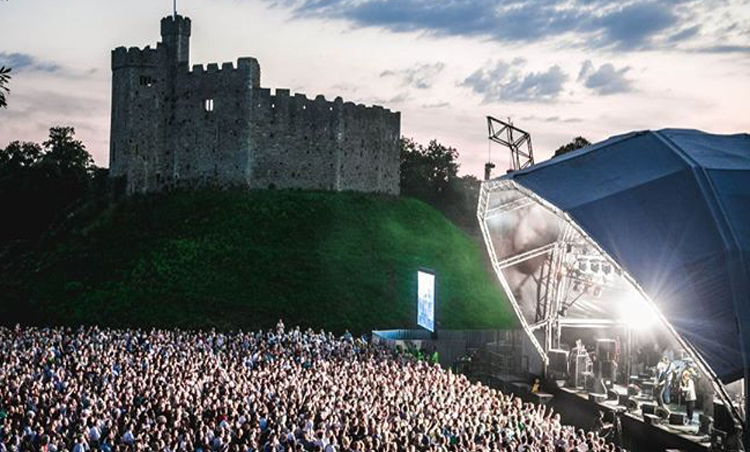 With the Christmas season fast approaching, you may be entering panic mode. What in the blue blazes do you buy your *insert title of a significant person in your life here* this festive season? Well, worry about that no longer. Lucky for you there’s been some huge announcements for gigs next year in the city. We’ve compiled a list of the top names coming to Cardiff in 2020 that your giftee is bound to love. And, trust me there is definitely something here for everyone.

Hello! Is it this you’re looking for? I mean what do I really say here? It’s bloomin’ Lionel Richie! I don’t have to describe him or say how much of an ultimate music legend he is… so how about instead I list some his biggest hits and you imagine yourself watching them with a pint in your hand on a warm summers evening under the stars in the castle: All Night Long, Three Times a Lady, Truly, Hello, Endless Love, Dancing on the Ceiling… Sold? I thought so.

Get your tickets here: https://www.seetickets.com/

Another world-renowned, smooth-talking, silver-tongued singer, that my mum definitely has a crush on. The Bubmeister himself will be here for one evening only. Not to stereotype his audience, or to discourage anyone from going to see Michael in action, but if you’re really struggling to find a present for your mum or gran this year then I’ve just tossed you a lifeline. Seriously you’re not going wrong with this one, you’ll make somebody very happy with this gift to see the Canadian king of Christmas himself.

Get your tickets here: https://www.axs.com/uk (on sale 6th December)

The first of the year’s big hitters comes to Cardiff after undoubtedly being one of the greatest breakout stars in recent years. Capaldi took the world by storm with Someone You Loved and now he’s touring in preparation for his debut album Divinely Uninspired to a Hellish Extent, which will be released in May this year. You’ll be hard-pressed to find someone who wouldn’t love to see tickets for the charismatic Glaswegian appear in their stocking this year.

As if that isn’t enough, just 3 days later Welsh icons the Stereophonics will be returning to the city, for two shows on their latest arena tour! The local band have been knocking it out of the park since before I was born, and it’s no wonder they’re still one of Wales most loved bands to this day. They’re coming equipped with some brand new material of their new album Kind (which would be a perfect add on gift with the gig tickets… just saying), but I’m sure they’ll be bringing out the old school bangers as well.

After their explosive reunion on the X Factor recently, it’s hard not to get excited about their return. Don’t Cha just wish you could see them live on stage? Well, don’t worry you can. They’re ready to bring the power of girl bands back to the UK, so if you know someone who was gutted they missed out on Spice Girls tickets last year then you know this is the perfect gift for them.

A wordsmith that crosses generations, relatable and relevant, a breath of fresh air on the music scene; Gerry’s been described as all these things and more. With his debut album Erratic Cinematic hitting the top of the iTunes music charts in 2017, his career has only risen from there. Now he’s bringing his chilled out and often sing-a-long show to the great Welsh outdoors. I know it’s hard to imagine now, but the weather should be better for an awesome evening of live music under the stars.

Get your tickets here: https://www.seetickets.com/ (on sale 6th December)

Told you we have something for everyone! Known for their crazy pyrotechnic shows as much as their classic German rock, Rammstein cannot be missed by any bona fide metal head within 100 miles of the Welsh capital. As part of their mega summer stadium tour, the Principality may need some renovations after the legends of the rock world are through with it. Seriously, it’s worth the cost of entry alone just to see their signature flamethrower guitars and the singer to set himself on fire. Honestly, I’m not joking!

Get your tickets here: https://www.principalitystadium.wales/events-tickets/

Perhaps a bit toned down (but no less fierce!) Little Mix will be bringing their unstoppable energy back to Wales. After 5 top-selling albums and multiple world tours, it’s no surprise that Cardiff can’t get enough of them. They’ve certainly got the Power and tickets for this gig would undoubtedly make any fan dance about with joy on Christmas morning.

Get your tickets here: https://www.ticketmaster.co.uk/

Depot in the Castle

Returning for its 4th consecutive year, this event is quickly shaping up to be the crown jewel in the Cardiff summer calendar. Although the headliners are yet to be announced, you know the day will be one to remember following on from previous years. They boast headliners such as Clean Bandit, Sister Sledge, Tom Odell, The Fratellis and more. This really is one of the best days out of the whole year and one that you can bring the whole family to.

Get your tickets here: https://www.skiddle.com/

Shut Up! For the king of grime, himself will be here to round off the summer of music in the capital that really has delivered to everyone. He’s gone from one unbelievable achievement to another and shows no sign of slowing down. So, hot off his explosive headline performance he’ll be touring the UK in a 2020 arena tour. Not one to be missed and the ultimate ending to a summer of world-class musical entertainment. All hail the King!

The Depot Warehouse to relocate from Cardiff’s Dumballs Road

The Dirty Vegan is setting off across the Atlantic for Charity