Author It's On Editorial 376 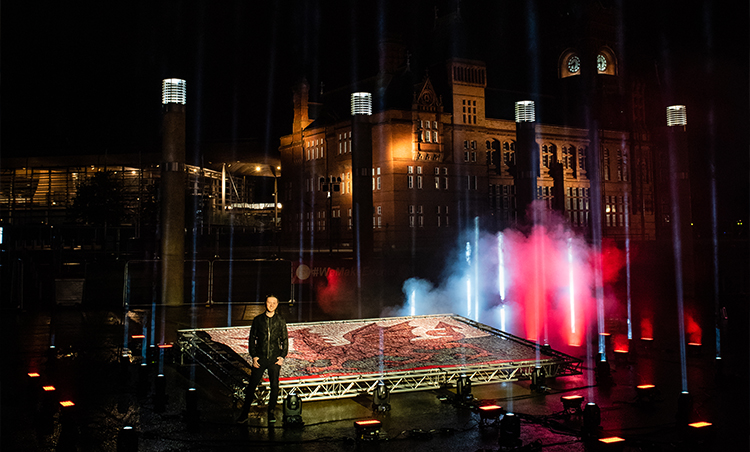 Events professionals across Wales have come together to highlight the urgent support needed to keep the sector from the risk of collapse during the current pandemic. Professionals and volunteers from across the industry have united to plan activity as part of a global awareness day, which includes a digital collage of the Welsh flag made up from 500 of events people in Wales.

Commenting on his latest artwork, Nathan Wyburn said “I’m honoured to have been asked to be part of this campaign, as a proud Welsh artist I’ve often made art that reflects the times, and the Covid-19 pandemic hasn’t been an exception. It’s been heart-breaking for me as a concert and theatre attendee, an events hosts and charity fundraiser to not be able to do any of these things. Many of my friends also work in these industries and have lost their income. I too, lost a lot of mine. I think the artwork of the dragon roars with Welsh pride, but also sadly shows how much talent is currently unable to be used. To think 500 people sent in photos and that’s barely 1% of the people in Wales affected by this… that’s extremely emotional.”

Amid significant job losses and reduction in demand as a result of COVID-19, the global events industry is joining forces from 8.00pm BST on the 30th September for a Global Day of Action. The initiative will see event professionals and venues from 25 countries lending their support. The Day of Action marks the start of a new phase of the wider #WeMakeEvents industry campaign, alerting governments worldwide to the disastrous situation the sector faces without financial aid.

According to DCMS, the value of the UK’s Cultural Sector currently exceeds £100bn, and was the fastest growing sector in 2017 and 2018. Despite this, the sector does not receive grants, which means that the recent £1.57 billion bailout from government in light of COVID-19 is not reaching the highly skilled people, manufacturers or the huge supply chain of businesses that enable the sector to operate. When this supply chain is taken into account, the number of people affected nears one million and threatens to destroy all of their livelihoods, as well as the future of live events in general.

#WeMakeEvents is now calling on governments worldwide to extend significant financial support for the people and companies in the events sector supply chain until they are permitted to run mass participation events and can viably return to work.

A Global Day of Action – what’s in store?

The #WeMakeEvents campaign has been ramping up activity to highlight how the global live events industry, which usually comprises over 30 million workers worldwide, urgently needs to get back to work. Without significant financial support for the people and companies in the events sector supply chain, there is no possibility of a financially viable return for the foreseeable future.

On the 30th September, Wales event professionals will join other industry colleagues in thousands of cities across the world to Stand As One for the Global Day of Action. The ‘baton’ will be passed across different time zones and feature creative activities, which include:

Additional activity will include large screens and mobile vans touring Cardiff emphasising the need for the Welsh events community.

The majority of the industry has had no income since the beginning of the crisis in March, and with a global second wave of COVID-19 imminent, and nine recent local-lockdowns in Wales, a date to return to work has become impossible to predict, leaving many companies and individuals devastated, both financially and personally.

As part of the Global Day of Action, industry leaders in Wales have commented on the situation at hand:

Sarah Hemsley-Cole, Director of SC Productions, a Cardiff based events management company supplying major UK festivals and large arena tours said “The situation here in Wales is very fragile. Colleagues in venues and companies cross the Cardiff and Wales, are in redundancy consultations with whole workforces being laid off at the end of October.  Whilst we recognise the support offered by Arts Council Wales and Welsh Government – it is a drop in the ocean for what is needed. Welsh Government are looking to support 2800 event and arts freelancers yet there are around 7000 freelancers based in Wales.  Our industry is not permitted to work. The new UK government scheme is based on job retention for those working at reduced capacity – the live events industry is not at work – so we need urgent financial support to have the ability to provide live music, festivals, community events, concerts, theatre on the other side of this pandemic.”

Phil Hurley, Director of Cardiff based Stage Sound Services, a hire and production service company providing sound and video services to the theatre, corporate and events sector throughout the UK & internationally, who’s recent work includes theatre tours such as Blue Man Group, Matilda and Warhorse said, “We started to see our international theatre, events and conference work slowly cancelling at the start of March, and then the big blow when the West End and touring theatre work all stopped on the 16th March.

We employ almost 100 skilled staff here in Cardiff, supporting some fantastic productions from Cardiff to LA and it’s very tough to see the impact on the business I started from nothing many years ago, to a profitable and well established company now struggling to find our way with the huge amount of uncertainty we have in our sector.

The Government’s latest Job Support Scheme will be a small help, but more support is needed for companies like mine along with all the other associated organisations, freelancers, venues etc.  The majority of my work force have been furloughed since March and I have had no choice but to make redundancies in recent months too.

Phil continued “We are world leaders in our sector and once lost it will be difficult, if not impossible to get back.  The joy we give to people through the world of entertainment, and the huge benefit to people’s wellbeing that will be needed on the other side of this pandemic, should be paramount. “

In July, the Welsh Government’s Cultural Recovery Fund was launched aimed to help organisations in the culture and heritage sector to bounce back after months of closure and loss of revenue. Administered by both Welsh Government and Arts Council Wales, the £53m the fund, the Eligibility Checker for the fund has been live since 1 September.

#WeMakeEvents is working hard behind the scenes, securing meetings with government officials and gaining support from a number of cross-party MPs who have written directly to the Chancellor.

To find out how to support the campaign, please visit www.wemakeevents.com

Roll Up, Roll Up, The Circus is in Town

The best things to do this weekend in Cardiff