Author It's On Editorial 695 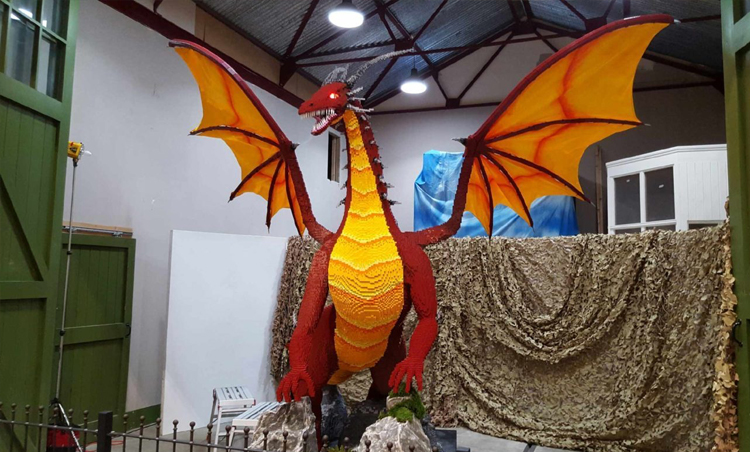 Cardiff Bay will be home to mythical creatures and more this summer when the BRICKLIVE Fantasy Kingdom heads to Mermaid Quay.

From Saturday 3rd August – Sunday 1st September, nine models made with a total of nearly 750,000 LEGO® bricks will take centre stage in Tacoma Square, in the heart of Mermaid Quay.

Free to view, the display will feature an 11ft fire-breathing dragon, a unicorn and two hunting wolves as well as a wizard, princess, knight and huntswoman. Collectively the models took over 2,000 hours to build. There will also be 10 cute dragon whelps (baby dragons) displayed in the various businesses in Mermaid Quay.

At the heart of the display is a throne – laid out in shimmering silk and encrusted with the finest LEGO® brick rubies, emeralds and sapphires – on which visitors can sit and take selfies. Mermaid Quay will be running a weekly photo competition to crown a Selfie King or Queen each week – with FREE ice cream for a year from Cadwaladers Mermaid Quay as the weekly prize.

This will be the first time BRICKLIVE’s Fantasy Kingdom have been be on display in Wales and follows the success of previous displays at Mermaid Quay including the Great Brick Safari, Santa’s Sleigh and Big Cats.

Visitors can experience life-sized sculptures of key characters from the story: Princess Orra, Abbra the Wizard, Sir Studley the Knight, Chester the Jester and Torre the Huntswoman. Guests will be amazed by Mythrog, the huge life-like dragon standing over 4m tall and 5m long with glowing eyes, realistic sound effects and dragon breath. Follow the clues to reveal the Baron’s plans and help Princess Orra thwart them, returning her father’s kingdom to peace and prosperity.

Previous displays at Mermaid Quay attracted many thousands of visitors and it’s anticipated that the BRICKLIVE Fantasy Kingdom will be equally popular with avid fans of LEGO® bricks and visitors to the area.

Mermaid Quay Centre Manager Justin Patel said:
“Our BRICKLIVE displays are always a huge hit and we’re confident that Fantasy Kingdom will be equally as popular. LEGO® brick fans and visitors to the Bay will be able to let their imaginations run wild at our medieval fantasy land of ancient Welsh myths and legends. Plus, we’ve got lots of competitions throughout the summer for visitors to be in with the chance of winning some fantastic prizes from the Mermaid Quay businesses.”
The display will be visible any time, but the throne will only be available to sit on 10am – 6pm daily.

Visiting the installation is free of charge.