Author It's On Editorial 126

Mermaid Quay is putting the Tiger back into Tiger Bay for October half term with an amazing display of 12 BIG CATS plus some super cute cubs, all made with  LEGO® bricks.  From lions and cheetahs of the Sahara, to agile jaguars of South America and, of course, a fabulous Bengal tiger, BIG CATS at Mermaid Quay is an exciting display of great wild cat species from across the globe.There’s now just a few days to go till the BIG CATS arrive at Mermaid Quay. The incredibly detailed models, which took almost 1,750 hours to build and comprise nearly 650,000 bricks, will be located in Tacoma Square, in the middle of Mermaid Quay, overlooking the waterfront from 27 October to 4 November.   It’s completely free to view.The models are being brought to Mermaid Quay by Bright Bricks, the world’s premier independent LEGO brick building firm.  Bright Bricks has a team of over 30 talented LEGO artists that specialise in producing amazing LEGO brick models ranging from “Brickosaurs” to “Warriorbots” plus, of course, the new BIG CATS display.This is the first time that Bright Bricks’ BIG CATS display has been on display anywhere in the world.  The display will be visible 24/7, but the central area – which will include two models that can be touched – will be open from 10am – 6pm. 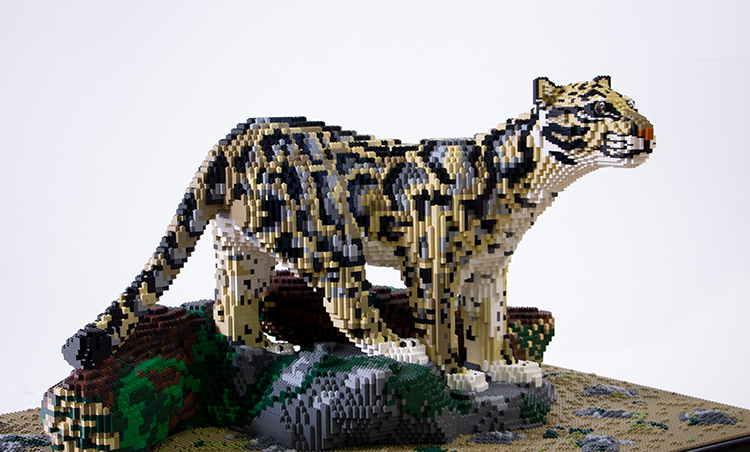 Liara (Lioness)
47,000 bricks
4 builders
162 hours
The proud hunter of her pride, Liara the Lioness hunts and collects food for the rest of her family, while the male lions conserve energy and protect their den.
Tonya (Tiger)
87,000 bricks
4 builders
229 hours
From the forests of Myanmar, Tonya is one of fewer than 3,000 Bengal tigers left in the world.
Padma (Panther)
79,067 bricks
4 builders
212 hours
A panther is any leopard, cougar or jaguar with a condition that turns their fur black, called melanism. Believe it or not, Padma and her kin have spots on their fur like leopards, but they’re too dark to see!
Lyra (Lynx)
42,423 bricks
2 builders
160 hours
Lyra the lynx is nocturnal, and not seen during daylight, making her a rarer sight than many of her feline cousins. While she’s a fast runner, Lyra prefers to stalk her prey from the shadows and set an ambush.
Chase & Andre (Cheetah & Antelope)
54,750 bricks
4 builders
197 hours
Known for their incredible 70mph running speed, cheetahs are the fastest land animal in the world. Chase is a prime example, able to catch up with Andre the Antelope with ease.
Lesley (Snow leopard)
41,847 bricks
2 builders
116 hours
Lesley the snow leopard, like others of his kind, is covered in 5 inches of thick, pale fur, and stalks the high ridged, snowy mountains of South Asia. His fur is perfect for hiding in wait for prey in the snowy peaks of the Himalayas.
Lennox (Clouded leopard)
23,953 bricks
2 builders
57 hours
Covered in larger spots than their cousins, clouded leopards like Lennox are the best climbers of the feline world, with rotating rear ankles for speedy downward climbing.
Lenora (African leopard)
102,280 bricks
4 builders
230 hours
While among the smallest of the big cats, the African leopard is among the most distinctive, with its clusters of black spots running along its hide. This leopard, Lenora, is a stealthy hunter, using the spots as camouflage in the dense Saharan undergrowth. 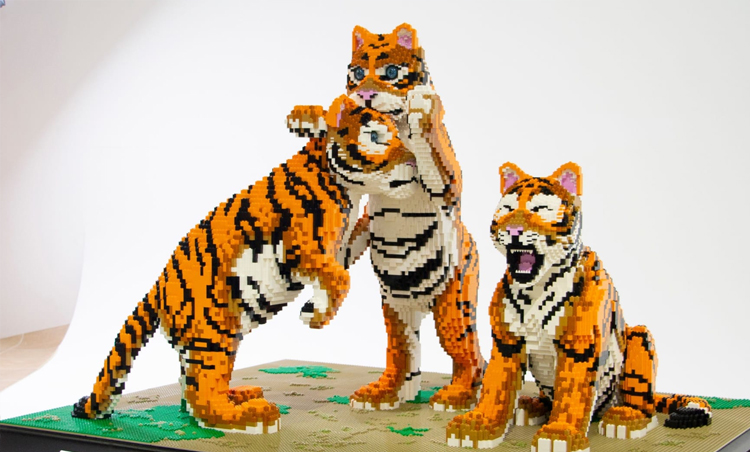 Tawny, Tabby & Tammy (Tiger cubs)
64,198 bricks
2 builders
105 hours
Tigers are born into big families, with a usual litter of cubs ranging from 3 to 7 infants, each one weighing only 3½ pounds when born!
Liam & Lita (Lion cubs)
23,599 bricks
2 builders
149 hours
When they’re born, you might mistake a lion cub for a leopard – Liam and Lita started life with little brown spots on their fur, that disappeared as they grew older. They also didn’t meet the rest of their pride other than their mother until they were two months old!
Caracal family
75,838 bricks
3 builders
125 hours
This tight-knit Caracal family is a powerful band of predators. In a single jump, any one of these fearsome felines can catch up to 12 small birds, which are their meal of choice.
Preview post